Whenever I tell people I run an art gallery in Tokyo promoting young Japanese artists I’m often greeted with the question ‘Are there any good young artists in Japan?’ It no longer shocks me. It still surprises me, but I’m beginning to understand why people outside of Japan, and in fact many living here, don’t know about the high quality of young Japanese artists.

While people may have heard of the more famous Japanese artists from a slightly older generation, like Takashi Murakami, Yoshitomo Nara or Takanobu Kobayashi, they’re unfamiliar with younger artists and rarely have an opportunity to see them or their work.

In the case of young Japanese artists, the force propelling them toward exposure and recognition is actually in a way going against them. To be seen and to become known as a Japanese artist requires overcoming many hurdles, so I think it’s safe to say that the quality of art here is the art world’s best kept secret.

So why does a great deal of Japanese art remain unknown in Japan and abroad?

To begin with, museum visitors here rarely see works from younger artists. Many museums in Japan, with a few exceptions, focus on artists from overseas or Japanese artists of historic importance. The Mori Art Museum in Tokyo is a notable exception and showcases some younger artists. And some of the large art institutions, like the National Art Center, Tokyo are better termed exhibition spaces because they don’t house permanent collections.

There’s also a lack of competitions sponsored by museums here that search for young talent. Meanwhile, the museums’ paltry budgets only seem to get smaller every year, preventing new purchases.

In some cases, private corporations sponsor competitions, like the recent efforts by the Mitsubishi Corporation (the country’s largest trading company), to sponsor a competition, purchase works and then offer some for sale at auction. While this might seem like a step in the right direction, the works in the Mitsubishi competitions look like they were chosen by someone without any background or interest in art. I’ve never met a collector or gallerist who has gone to these shows in search of new artists. It looks more like good publicity for Mitsubishi and a way for people to acquire something inexpensive to put on their walls. Mitsubishi’s efforts haven’t been met with enthusiasm by any part of the art community in Japan.

While Mitsubishi may have had noble intentions, they definitely could use a panel of collectors, gallerists and academics to help them with their selections. Alternatively, they could give sponsorship money to a museum for a competition or they could buy works for some of their buildings. 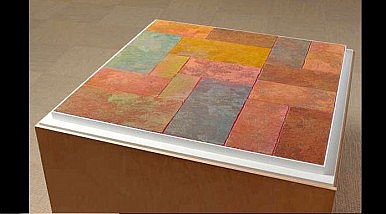 I must admit, there have been successful and appealing shows mounted by the Shiseido Museum and the Shiseido Corporation, which annually mounts the Shiseido Art Egg, a competition to find young Japanese artists.

Shiseido, the oldest cosmetics company in the world, has a long history in supporting the arts and there are close to 200 entrants. Each year, the top three are rewarded with a one month museum show, a professional catalogue and exposure to many collectors, curators and gallerists.

There’s too much to say in just one entry, so next week I’ll continue to look at the reasons why so much of Japan’s top contemporary talent today remains the art world’s best kept secret.

Inter-regional solidarity in the face of aggression is welcome. But there are hard limits to hard commitments outside of a country’s home region.