Starring the artist dressed as a giant orange insect, Anida Yoeu Ali’s multi-media installation and performance project, The Buddhist Bug, is nothing if not unique. Last week, one single print from the unusual series won its Phnom Penh-based creator the Sovereign Asia Art Prize for emerging artists.

Known as “The Bug” for short, the installation features a fantastical orange creature made from a soft, flexible tube and worn by Ali in various urban and rural settings. It’s a playful exploration of displacement from the perspective of a Cambodian Muslim woman raised in the United States. Ali, now 41, was less than two years old when the Khmer Rouge seized power in 1975. Her family survived the regime, which oversaw the deaths of a quarter of the population, eventually settling in Chicago. She didn’t return to her birthplace until 2004 and says she initially felt nothing — “no numbness, no familiar sensation, no sudden connection.” But her experiences there over the next few years — she moved to Phnom Penh in 2011 — played a part in the creation of The Bug, which has made a temporary home in many of the city’s backstreets and galleries. 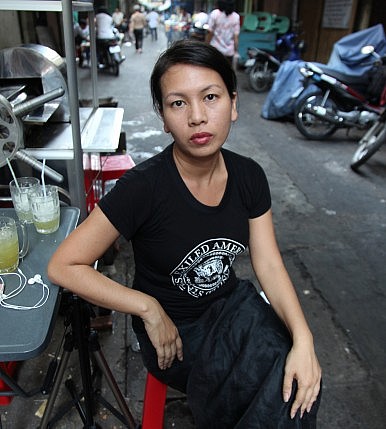 Your work is focused on identity and, in particular, your own experiences. When did you first start to think critically about identity and what prompted you to turn those ideas into art?

I was raised in the United States, a country where one is always aware of one’s difference especially if it conflicts with perceived norms in race, religion, or sexual identity. My path as an artist began in spoken word poetry where I wrote original prose poems which were often declarations of identity politics. From then on, identity was never a separate “thing” I would tackle but just seemed like a natural extension — like muscles I would regularly flex.

The Buddhist Bug is often described as an exploration of spiritual turmoil, incorporating both Buddhist and Muslim ideas. Can you describe what is meant by that?

I was born and raised Muslim. My ancestry is mixed: Thai, Malay, Khmer, and Cham. My family has carried the Islamic tradition for generations and when they were forced to leave Cambodia for America, it was critical for them to preserve our Cambodian Muslim heritage. When my parents came to the United States, our Islamic religious traditions were prioritized. I grew up reading and writing Quranic Arabic and my family built social relationships amongst the American Muslim community — a pluralistic gathering amongst Egyptians, Arabs, Pakistanis, and Indians. In my childhood, I spent more time amongst Muslims of varying ethnicities than with Khmer people. Islam has always been part of me, and continues to shape me, although I am much more critical of the religion as an institution. I use religious aesthetics in my work because it’s what I grew up with, and continues to inform my political outlook.

When you say you are critical of the religion as an institution, what do you mean by that?

The Islam presented in the media is not the Islam I grew up with. Nor is the version being manipulated by oppressive governments and attempts toward extreme fundamentalism. When I say I am more critical I simply mean that I will not be manipulated to believe that Islam is a tool for patriarchy, power, or war.

Some people within Cambodia’s Cham Muslim community incorporate other religious practices into their spiritual lives. That community is shrinking as people turn to more traditional Islamic practices.

I know the Cham identity is more than about being Muslim. Some Cham communities also integrate animism — the identity pre-dates Islam. If your question is about how I feel that more people are turning to traditional practices of Islam — I would say that I blame that on the emerging Wahhabism [Saudi Arabia’s dominant faith] that seems to be swinging Islamic practices into a fundamentalism created from fear and the need to control people through practices that have nothing to do with the Islam that I grew up with.

One of your installations, exhibiting hate speech received by American Muslims, was defaced. The Buddhist Bug drew criticism from Cambodian Cham Muslims who disliked the association of Islam with the word ‘bug.’ How do you react to that?

This is my role as a performance artist. This is what I do — I put my body into public spaces and take on people’s reactions and responses. If my work provokes then that means people are not only thinking but they are feeling.

You are a self-described ‘global agitator.’ And you have been involved in many different politically-minded projects — Cambodian Son [a documentary on deported poet Kosal Khiev] for example.

I am absolutely a global agitator. I embrace that role and feel the world is a better place because we refuse to stay silent, or sit still, or remain invisible while so many terrible things are happening around us.

What’s next for The Buddhist Bug?

I have been selected as an artist for APT8 (8th Asia Pacific Triennial of Contemporary Art) in Brisbane at the end of the year. I will be premiering a new commission in the Buddhist Bug series where I get to explore the Bug’s nightlife in Phnom Penh! It should be fun.

Stranded passengers disembarked and were welcomed to Cambodia by the nation's authoritarian leader who handed them flowers.

The Bunong vs. The Sesan II Dam

For the indigenous Bunong people, a desperate battle against the Sesan II dam will decide if their community has a future.

In Cambodia’s far north, the Mekong is under threat from one of the most controversial environmental project in the country.

What’s Ahead for China’s Space Program in 2021?

From a Mars mission to the beginnings of a new space station, this year will be full of milestones for China.

As a result of COVID-19, the educational gap is expected to widen across ASEAN.

AI represents an emerging area of regional security collaboration in spite of its inherent challenges.