“How can you govern a country which has two hundred and forty-six varieties of cheese?” lamented French President Charles de Gaulle. India, with 22 official languages (and over 1,000 mother tongues), faces a similar puzzle. Of all places to run a democratic experiment, exceptionally diverse India seems the unlikeliest: Its democracy is messy and graft is persistent. However, India has recently earned Asia’s second highest ranking (#17) for data openness, behind Taiwan (#1 in the world). What does this say about data openness elsewhere in Asia, and about the universal application of Western metrics?

This is the age of rankings. Many are developed by scholars at Western institutions, universities, and think tanks. In addition to Washington Consensus neoliberalism (Western in its own right), there is an underlying liberal-populist orientation in what many indices measure – corruption, democracy, social justice, economic equality, and transparency. Predictably, countries with non-Western economic and institutional histories fare poorly in such indices, prompting commentators to lecture policymakers about better governance.

The Global Open Data Index 2015 (GODI) is yet another opportunity to do so. Measuring data publishing openness across a variety of dimensions (e.g. government budget, government spending, national statistics, and legislation), the index includes 122 countries. Of the top 50, seven are in South, East, or Southeast Asia. The accompanying chart compares performance across the three years of GODI data for all South, East, or Southeast Asian countries included in the ranking. Singapore is excluded due to a gap in data between 2013 and 2015. The percentile is used to control for differing numbers of countries across years (60 in 2013, 97 in 2014, and 122 in 2015). It represents the percentage of countries scoring below a given country’s rank; it is not a raw percentage of “openness.” 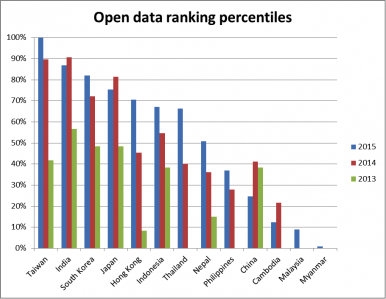 The chart reveals several notable trends. The most obvious is Taiwan’s meteoric rise in the span of three years, from the bottom half of all countries to #1. India and Japan have shown similar improvement despite slight downturns in 2015. South Korea, Hong Kong, Indonesia, and even Nepal also show consistent progress. The story is not so positive for China, which has fallen to the bottom quarter after initial progress. Newcomers Cambodia, Malaysia, and Myanmar are significantly lagging, while Vietnam, Brunei, and Laos are unmentioned.

Lack of data openness often raises concerns about corruption, with the assumption that “closed” governments have something to hide. To determine whether the data affirm this, it is helpful to compare the Global Open Data Index with the Corruption Perceptions Index (CPI; 174 countries). The CPI derives scores from an aggregation of various governance indices including the World Economic Forum, World Justice Project, World Bank, IMD, Freedom House, The Economist Intelligence Unit, African Development Bank, and others. The accompanying table compares rankings for all South, East, and Southeast Asian countries included in both indices. To adjust for the difference in number of countries surveyed, the table scores each ranking as a percentage of the total. In both indices, higher is “better.” Variance, measured in percentage points, is the degree to which rankings for the same country differ between indices. 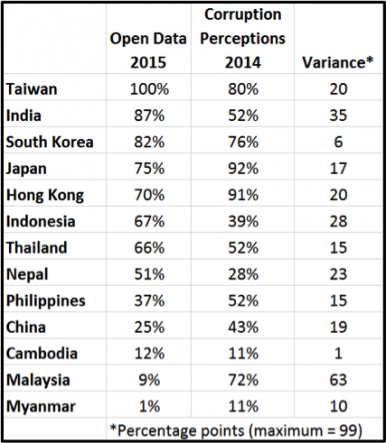 Although the two indices use differing indicators, the assumption is that they correlate. In reality, there is little correlation for some countries, and the reasons likely go beyond methodological differences to reveal case-specific insights. The greatest variance by far is Malaysia, which scores well on corruption perception but 63 percentage points lower on data openness. What formula has the Malaysian government developed that makes it the second-worst country in Asia for data openness but among the top-five least corrupt? One answer may be trust: Perhaps the people surveyed have faith in the Malaysian government despite its lack of data openness. Being one of Southeast Asia’s more successful development stories, and given its outward perspective, Malaysia has certainly earned global credibility. However, should this success earn a free pass on data openness?

The second largest variance (35 percentage points) is India, whose performance is the opposite of Malaysia’s: positive on open data but less so on corruption perceptions. There are two possible explanations: either access to data has exposed graft, or the type of data openness measured by the index is unrelated to measures of corruption perception.

Taiwan’s high performance in both measures is worth noting, given that the country shares India’s well-established and politically competitive democracy. Is this a coincidence, or is democracy a prerequisite for open data? Some of Asia’s long-serving political parties appear to have adopted a “bend-don’t-break” strategy for absorbing democratizing forces and the pressures of socio-economic transformation. Adaptability represents a new governance model: safeguarding legitimacy by taking small but measurable steps towards Western-style openness. Whether this means gaming the indices or adopting substantive reforms remains to be seen.

For better or worse, the conversation about “good governance” is dominated by Western academic thought. With over a century of publishing history (and an intellectual provenance traceable to ancient Athens), Western scholarship in Public Administration has a mature theoretical basis supported by decades of empirical verification. Concepts of political representation, collaborative governance, and social justice have emerged from earlier debates about statism versus privatization. In the global marketplace of ideas, the West – with its indices measuring democracy, openness, and equality – has the bully pulpit on governance.

If leaders are uninspired by Western tenets, they have two options. First, they can accept being scorned about poor performance in governance indices, potentially compromising their efforts to economically and diplomatically engage the “liberal” West. Alternatively, they can define and defend their own particular governance styles, and develop rival indices to encourage contestability in the global realm of scholarship. If an alternative governance model is defensible, there should be no reluctance to do this.

Even a blind squirrel occasionally finds a nut. Does India’s unexpectedly high data openness signify enlightened governance, or is it the lingering effect of Western institutional legacy? Many governments face a fork in the road. The path to economic growth is no longer a mystery, and numerous countries are making progress on basic human development. Higher order needs will soon call for attention – the same needs that many developed countries already acknowledge. These include social equity, personal fulfillment, and even political engagement. Can Asia’s governance systems accommodate them? According to Western views about data and corruption, the prevailing answer is no. It is up to Asian countries to justify their governance philosophies – if not to the world, then to their own citizens. The least they could do is be “open” about this.

Laws targeting unexplained wealth exist in many Asia-Pacific countries but are rarely used. They should be dusted off to tackle the region’s rampant corruption.

The move was less about coal shortages than about reminding Indonesia's private sector who is in charge.

As China’s infrastructure improves further, it’s going to be harder than ever for U.S. multinationals to move to underdeveloped countries like Vietnam and Indonesia.

The Indonesian rail operator KAI remains one of the country’s more well-run and capable state-owned companies.