The Kyrgyz-Tajik border remains a contentious place. The latest victim of unclear boundaries appears to be an RFE/RL correspondent. On February 8, according to the news organization, a correspondent for their Tajik service was detained by Kyrgyz border guards“for failing to cross the border through a Kyrgyz checkpoint.” (Update: he was released after eight hours.)Masumi Muhammadrajab had been in the area to report on a local dispute involving Kyrgyz border guards hoisting a Kyrgyz flag on a home owned by Tajiks.

A Kyrgyz news site, 24.kg, reported on February 6 that a Tajik man and his two children were detained and fined by Kyrgyz border guards for crossing the border to cut down trees. Both detentions happened in the same general area: south of Khujand in the far western piece of Kyrgyzstan’s Batken province — Leilek District.

There’s a long history of border problems in Central Asia, particularly between Kyrgyzstan, Tajikistan, and Uzbekistan. The problems exist at two levels: disagreements between the regional states regarding national boundaries and local-level disputes, which can have numerous causes. Settling problems at the state level will not necessarily solve them at the local level — a border in a rural area, after all, is often an invisible line to those standing on it — but it’s a start and would help clarify policy for border units. 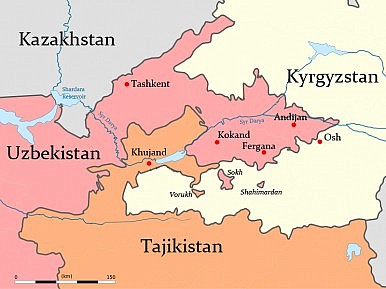 At the state level, Kyrgyzstan and Tajikistan meet regularly but don’t make a tremendous amount of measurable progress. In November they drafted an agreement on already agreed areas, comprising of nearly 520 kilometers of the almost 1000 km border. In January the Kyrgyz parliament endorsed the agreement. The disputed sections run between Tajikistan’s Sughd province and Kyrgyzstan’s Batken province where there are a handful of enclaves, areas belonging to Tajikistan (and also Uzbekistan) but which are entirely surrounded by Kyrgyz territory. The agreement (provided the Tajiks also approve it) is a step in the right direction but with the more contentious segments of the border still in dispute at the national level, enforcement at the local level will continue to cause problems. But because regional governments routinely react to local incidents by pushing for dialogue with their cross-border counterparts, the likelihood of greater conflict sparked by some local incident is lessened.

There were several notable incidents in 2015 between citizens of border units of regional states. In May an Uzbek border guard killed a Kyrgyz man smuggling potatoes from a mostly ethnic Tajik exclave belonging to Uzbekistan. During the early summer, in separate incidents a Kazakh was shot on the Syr Darya by Uzbek border guards, Kyrgyz and Uzbek border guards exchanged fire, and Uzbek guards fired on a pair of Tajiks crossing the border. In August there was a rock-throwing incident between Tajiks and Kyrgyz near the Tajik enclave of Vorukh stemming from a blocked road and blocked canal, although the order of events depends on which side you ask.

Muhammadrajab, the detained RFE/RL Tajik service correspondent, is no stranger to the border. In November 2015 the OSCE recognized him for his reporting on cross-border collaboration between Tajiks and Kyrgyz.

The Enduring Difficulty of Settling the Kyrgyzstan-Tajikistan Border

Kyrgyzstan and Tajikistan’s presidents met recently to discuss border delimitation in the wake of recent violence.

Radicalization in Central Asia: 'Not In Our Name'

A new documentary project filmed in Central Asia seeks both to document and counter violent extremism in the region.

What Do Central Asia and the Middle East Have In Common?

Plus, Islam and legitimacy in Uzbekistan; a quiet border and a dying Tajik theater. Recommended reads.

In Afghanistan, Women Give Up Freedom to Stay Alive

By Samina Ansari and Elliott Memmi

Far from seeing their rights as bargaining chips for aid, Afghan women live in a reality where the mounting restrictions also affect their ability to survive.