In September 2015, I traveled to the Indonesian island of Sumatra to present a paper at the International Indonesian Forum for Asian Studies (IIFAS). As my plane descended, I could barely see the city of Padang through a layer of smog so thick it blocked out the sun. I was witnessing what came to be known as the “2015 Southeast Asian Haze,” an air pollution crisis caused by fires raging across Sumatra and Indonesian Borneo.

Like many, I had a cursory understanding of the situation — informed mainly by the wide coverage in the global press and social media. Commentators, citizens and politicians alike were pointing fingers at an incompetent or indifferent Indonesian government, or to a lesser extent, rapacious palm oil companies. Yet this media coverage provided little insight into the root causes of this environmental crisis, in particular the complexities of Indonesia’s decentralized governmental system, and the global dimensions surrounding the supply and demand for palm oil. The disastrous environmental, economic and social impacts of the haze, which was deemed by one Indonesian official a “crime against humanity,” call for a more nuanced exploration of these underlying causes in order to explore potential remedies. In particular, the global community should recognize the indirect role we have in the fires through our consumption of palm oil, which is contained in some 50 percent of all consumer goods, and also understand how global supply chains for palm oil provide us with an opportunity to demand better behavior.

The West Sumatra region is an international drawcard – known for its natural beauty, as well as the distinctive architecture and unique matrilineal culture of the local Minangkabau population. Yet during my stay, the haze made it difficult to spend significant time outdoors, and dampened our efforts to explore the normally stunning coastline and mountain ranges. Our guide lamented that tourism numbers had slowed to a trickle as a result of the haze, affecting a vital source of income for the local community.

My personal experience in West Sumatra was just a snapshot of the wider effect of this haze, as it spread to countries across Southeast Asia. Six provinces in Indonesia declared a state of emergency, while Singapore and parts of Malaysia were also acutely affected. Businesses, schools, and universities were forced to close, bringing normal life to a standstill. These closures, coupled with disruptions to air, land, and sea transport, resulted in significant economic strain across the region.

The World Bank estimated the total economic costs of the fires at $16 billion in Indonesia alone, almost 2 percent of GDP and more than twice the cost of the 2004 tsunami. In addition, the deteriorating air quality resulted in hundreds of thousands across the region reporting serious respiratory problems. Researchers from Harvard and Columbia universities recently estimated that the haze contributed to over 90,000 premature deaths in Indonesia, with thousands more in neighboring Singapore and Malaysia.

In terms of environmental cost, more than 2.6 million hectares of land was burned in 2015, thousands of which had been the habitat of endangered species. The daily greenhouse gas emissions from the fires exceeded those of the entire U.S. economy –more than 15.9 million tons of CO2 emissions per day. The consequences of this haze clearly affect us all, and demand the attention of world leaders.

The haze set diplomatic tensions flaring in the region, with politicians and citizens alike quick to lay blame with the Indonesian government for failing to curb the fires blazing in areas of Sumatra and Kalimantan. President Joko “Jokowi” Widido appeared to take the issue seriously, dispatching thousands of soldiers and police, as well as water-bombing aircraft. He promised to come down heavily on those responsible for the fires, and introduce tougher regulations to do so. Yet, many Southeast Asians must have felt pangs of déjà vu given that the haze, the condemnation, and the tough talk on solving the issue has been an annual phenomenon for some time. Some might even remember the ASEAN Agreement on Transboundary Haze Pollution, an apparently legally binding agreement that was signed by member states way back in 2002. So the question on everyone’s lips was, why is the issue getting worse rather than better? 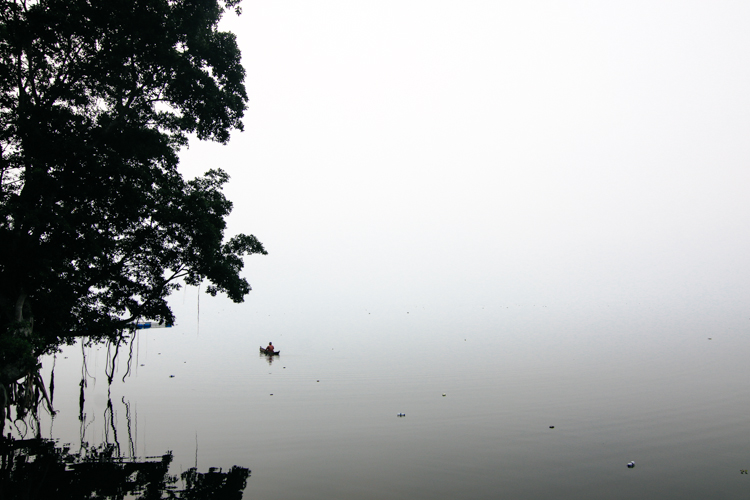 The transnational haze was the result of the illegal but widespread practice of “slash-and-burn” land clearing in Indonesia. This involves burning rainforests and peatlands to establish palm oil plantations. With global demand for the commodity extremely high, companies are eagerly looking for ways to expand their operations. Corruption amongst local elites in regional Indonesia has allowed land concessions to be awarded on an unprecedented scale, and has often seen companies escape punishment for engaging in illegal activities.

This is a product of the dysfunction that has plagued Indonesia’s democratic system since it began its “Big Bang” decentralization experiment, following the fall of Suharto in 1998. Many have praised Indonesia’s democratic transition, in particular the devolution of political and economic power to local officials across the diverse archipelago. Yet despite the successes of this new representative democracy, the rapid shift of power has led to increases in regional graft. In particular, it has empowered countless “little kings” – local elites who abuse their power for personal gain, and ignore national regulations and the courts that enforce them.

This remains an ongoing challenge for Indonesia, with more accountability and oversight needed to strengthen the rule of law and prevent abuse of power. The efforts of the country’s Corruption Eradication Commission should be applauded, as they grow in strength and boldness in their pursuit of corrupt officials across the archipelago.

While it is easy to categorize this issue as a localized Indonesian problem, we should also recognize that it has a global dimension. What of the palm oil plantation companies, many of whom are foreign-owned or have foreign shareholders, engaging in these practices of bribery and wide scale environmental destruction? What of the reality that palm oil is a global commodity, contained in a vast array of goods consumed by millions across the world?

As Indonesia tackles their side of the issue, it is important for the rest of us to reflect on consumer and corporate responsibility, as this is one issue that the global community can address. Reducing global demand for “dirty” palm oil, and implementing strict penalties for companies that produce it, would begin to address the cause of the transnational haze at the source. It would encourage sustainable and responsible practices in the industry, so that it can benefit Indonesia as well as international companies and investors without taking an environmental toll.

Consumers and suppliers need to be able to make informed decisions about the products they purchase, and certification provided by the Roundtable on Sustainable Palm Oil (RPSO) is one effective method. The group ensures that certified products are produced in line with certain standards, in particular that plantations were established on land without significant biodiversity or wildlife habitat. In 2013, 15 percent of the world’s palm oil was certified as sustainable, up from 10 percent in 2011.

Yet, while the supply of sustainable palm oil is growing, there remain significant challenges to shift market preferences along the supply chain. In many countries, such as my native Australia, there is no law that requires palm oil to be specified on a list of ingredients (let alone whether it is certified or not) — it is listed simply as “vegetable oil.” Legislators, retailers, and manufacturers the world over should show leadership by ensuring that certified goods are available and clearly labeled, allowing consumers to make informed choices. A bigger step would be to ban non-certified palm oil altogether.

It is also necessary to get tough on companies that continue to flaunt the law. Recently in Sumatra, a palm oil firm allegedly hired local thugs to kidnap and threaten a delegation from the Ministry of Environment, who were documenting cases of illegal burning. Such brazen behavior demonstrates the danger of not checking the power of these corporations. Reform for legally binding environmental liability in Southeast Asia is urgently needed, and a regional resource-management court is one way of addressing this. This would require strong leadership and commitment from the governments of Malaysia and Singapore, where many of the companies are based.

The Southeast Asian haze of 2015 was nothing short of an environmental disaster. Yet unlike most examples of exploitation of natural resources in the developing world, which quietly devastate the local environment and population, in this case the effect was highly visible on a global scale. This should confront us with the reality that this is a global issue, and that both consumers and suppliers of palm oil across the world have a hand in the fires which burn across the Indonesian archipelago.

Palm oil is not going away; indeed it is an important commodity that provides livelihoods for many in the Southeast Asian region. But it must be produced in sustainable ways in order to prevent a repeat of the devastating environmental, economic, and social costs seen in last year’s haze. From manufacturers, suppliers, legislators all the way down to the individual consumer, we all have a role to play in reducing demand for “dirty” palm oil, and coming down hard on companies that engage in illegal or unethical practices.

Thomas Brown is an Australian Researcher based in Indonesia for the last two years in various capacities. A contributor to Inside Indonesia and The Conversation, he is now working for the World Bank group on education policy.

A conversation with Patrick Cronin and Ryan Neuhard analyzing Beijing’s behavior in the South China Sea, its wider regional ambitions, and how to respond.

How Deadly Is ASEAN’s Killer Haze?

A recent study has prompted controversy and calls for action.

PT Adei Plantations has been charged with contributing to the massive haze that befell SE Asia this year.

Indonesia’s Haze Crisis and the Problem with Palm Oil

Change -- especially in instances where governments fail to sufficiently act -- truly is in the palm of our hands.

The EU and U.K. are willing to accept some managed risk in return for expected gains brought by interdependence with China.

The visit signals the importance of the bilateral relationship, but it also highlights the lack of progress in many critical areas.

No, Washington isn’t just now waking up to Central Asia as a strategic region.

Exercise Iron Fist 2020 is slated to conclude on February 21.