Politically, 2016 was a volatile year. The electoral changes in Europe, North America, and Asia have created uncertainties for international trade and investment in 2017. It’s clear that there’s a growing sense of nationalism and anti-internationalization where the masses feel they are missing out on the benefits of globalization despite solid evidence that it has lifted millions out of poverty, lowered the costs of consumer goods, and connected people and cultures across borders.

Recently, Brexit, Trump’s rise to the U.S. presidency, and China’s economic slowdown have stirred global economic anxieties and raised questions about the continuation of pro-trade policies. While some larger economies may be retrenching, emerging economies now have an opportunity to implement progressive and innovative trade initiatives to connect with non-traditional trade partners and diversify their markets. Companies with innovative products and services looking for export and growth opportunities can fill supply chain niches. While the world focuses on presidential tweets and the viability of the European Union, Asian companies can take the reins and blaze a new trail in Latin America as traditional commercial partners pull back to their home fronts. By the same token, companies in Latin America can and should look westward to Asian growth markets rather than continuing to focus their gaze northward.

While the geographic distance between the regions may seem vast, the abundance of natural resources, labor, capital and complimentary competencies can bridge this gap and lead to mutually beneficial economic growth. Latin America, with over 625 million people, will demand Asia’s competitively priced products and services. Asian businesses that have evolved and upgraded their competitiveness and capabilities can supply the technology, know-how, and the capital needed to expand into Latin markets and reach new customers.

East and Southeast Asia, with its 2.2 billion population and ever-growing upper and middle classes, will demand a greater diversity of products as well as the raw materials to fuel growth. Meanwhile, Latin American businesses looking to expand globally must strengthen linkages to Asia, not only as the traditional supplier of cost-effective products, but also sources of capital and new technologies. This will be increasingly important as the U.S. market becomes progressively more difficult to access, especially for countries such as Mexico, as a feared trade war with new tariffs and non-tariff trade barriers could stifle Latin-U.S. trade.

Connecting these dynamic economic growth regions is likely to prove challenging as differences in languages, cultures, time zones, and business practices will complicate initial business relationships. Governments and pioneering companies must be proactive in developing relationships with their corresponding local stakeholders to enhance cross-border trade and investment. Government-led programs with progressive investment attraction and trade promotion policies are needed. Participation in bilateral and multilateral free trade agreements is a key and innovative strategies, such as creating online database platforms to promote local products and distribution partners, will stimulate improved connectivity. Companies, on the other hand, must internalize their competitive advantage and growth ambitions and target them to the opportunities abroad.

The U.S. withdrawal from the Trans Pacific Partnership (TPP) sent shockwaves across potential signatory countries on both sides of the Pacific looking to expand free trade. However, ASEAN and the Pacific Alliance states are still looking to improve commercial connectivity. The Colombian ambassador to Thailand, Andelfo Garcia, recently stated, “The Pacific Alliance is an ambitious initiative aimed at deepening the integration of the four South American countries involving the free movement of not just people, but capital, goods, and services as well as investment. The Pacific Alliance also looks towards ASEAN countries, as we want the Pacific Ocean to be not a gap but a bridge between countries and economics across the two regions.” Coming from the largest economy in Southeast Asia, Indonesian Vice President Yusuf Kalla, echoed these sentiments by saying, “If TPP does not pan out, why don’t we initiate a cooperation between ASEAN and the Pacific Alliance? That is better than TPP.” Clearly, these two emerging regions are already looking to increase trade and investments.

Although U.S. protectionist positioning is likely to negatively impact many countries, this provides opportunities to strengthen commercial relationships between Asia and Latin America. Trans-regional trade negotiations will take time, but success is already being seen as Asian and Latin trade and investment flows have increased dramatically over the past decade, despite a recent decline in trade value due to the commodities bust. Latin America predominantly exports commodities to Asia, while Asia exports added value intermediate goods and medium-to-high technology manufactured products such as mobile phones, computers, various electronic parts, and much more. Since Latin American countries have generated less income from commodities, their purchasing power has declined in tandem, widening the trade deficit. In order to balance the scale, Latin America will need to increasingly diversify its economies by moving up the value chain. This is where Asian companies can play a bigger role as investors. 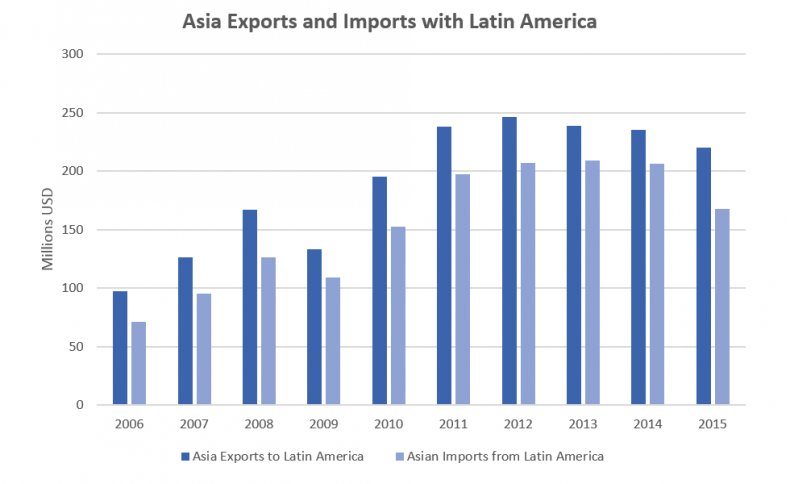 Ambitious Asian companies may not only find new markets and further diversify their global customer base, but also reduce costs by investing in Latin America. Over the past 30 years, Asian economies have evolved from base commodity and low-value-added manufactured goods producers to growing global leaders and technology providers. Also, as Asian markets become increasingly saturated and competitive, leading companies must explore new investment destinations.

Today, one could see the embers of the Asian economic miracle sparking in emerging Latin America. Central and South America, with its large populace, abundance of natural resources, and comparatively lower levels of industrialization could be that next frontier. Asian companies such as Viettel (Vietnamese telecommunications), Honda (Japanese automotives), Chinalco (Chinese mining), LG (South Korean electronics), and many others have invested in Latin America and are actively expanding. Asian FDI into Latin America offers the opportunity to not only source commodities for Asian use, but also supply directly to Latin America’s consumer market and reduce logistics costs.

On the other hand, Latin American companies have had a more difficult time expanding to Asia and do not currently have a strong presence in the region. Although there are comparatively few Latin companies in Asia, pioneer businesses such as Bimbo (Mexican baked goods), AJE (Peruvian carbonated beverages), Vale (Brazilian mining) and others have taken the leap and are expanding operations. While there is some success, Latin companies will need to dramatically improve to effectively compete in Asia, but this is a challenge that could be well-rewarded, especially if the United States erects increasingly higher barriers to trade. To spur competitiveness and market expansion, Latin American governments and the private sector will need to cooperate to build both the hard and soft infrastructure to support exports and outbound investments to Asia.

A number of Latin American leaders have recently expressed an interest in greater Latin integration and Asian outreach in the face of increasing “economic headwinds” from the north. But first they may need to look inwards and firm up their intra-Latin America trade and investment cooperation. Surprisingly, the region trades and invests less than what would be expected given the close proximity and long history. Brazil, the largest Latin economy, is the biggest investor into the region with some $300 billion while Mexico has invested just under $150 billion. Mexico’s relationship with the United States and Brazil’s internal focus and current economic challenges have slowed recent investment abroad, where in 2015 the much smaller economy of Chile was the lead Latin investor in Latin America. Today, distant China and Japan are catching up with Latin counterparts in terms of outbound FDI to Latin America — the two Asian countries combined have over $210 billion invested into the region, which is greater than many Latin countries. This signifies Asia’s growing presence and importance in the region.

Although today’s global news makes it seem like the world’s trade blocs are drifting apart, there has never been a better time to bridge the Pacific for enhanced Latin American-Asian economic cooperation. While the distance is great, both physically and culturally, opportunities abound for both Asian and Latin American companies. The right combination of private sector ambition fueled by public sector policy and support may just allow this economic divide to be spanned for mutually beneficial prosperity.

Since 2012, Daniel Bellefleur has led Tractus’ engagements in Indonesia as chief country representative. Prior to joining Tractus, Daniel worked as a Policy Advisor at the American Chamber of Commerce Indonesia while he also served as a Peace Corps Volunteer in Northern Thailand. Daniel has over 9 years’ experience living and working in Southeast Asia and has a Master’s in International Affairs focused on Southeast Asian Economics.

Is Latin America Trying to Further the TPP Without Trump?

Will an expanded Pacific Alliance be the successor to the Trans-Pacific Partnership?

The Pacific Alliance and ASEAN are crafting a key partnership of their own.

After RCEP’s Launch, the US Urgently Needs to Rejoin the TPP

The geopolitical rationale was always there, but the creation of RCEP changes the narrative about the TPP and American jobs.

The 23-year-old has vowed to “carry on the struggle for Myanmar” from abroad.

By Asma Alkaabi and Alvin Camba

Why Vietnam’s Economic Future is Bright – and Growing Brighter

Despite some potential headwinds, Vietnam is well positioned to capitalize economically on the growing Sino-American competition.

Public support is waning amid the new phase of heavy-handed enforcement.