HONG KONG — Leung Kwok-hung, more commonly known as Long Hair, has been a robust voice for democracy and political opposition since the British lowered the Union Jack and handed sovereignty of Hong Kong back to China two decades ago.

He has also provided the territory with a much needed moral conscience, a pleasant alternative to the businessmen and Mandarin-styled bureaucrats who now run the former colony and are often accused of pandering to Beijing at the expense of the local Cantonese population.

According to Leung, it was their type of economics that enabled China to hold the Hong Kong mantle while dumping the agreement made with Britain for full democracy. If this continues, then Beijing risks being hoisted by its own petard.

He says signs of stagflation are appearing in the Chinese economy, with the central government forced to print and pump money into an economy that continues to suffer from falling growth rates and is crimped by a mountain of debt.

“It goes to economic expansion,” Leung said referring to China’s financial penetration in Hong Kong, and around much of the planet, since joining the World Trade Organization in December 2001.

He said the turning point was the Global Financial Crisis in 2008. Debt levels escalated and the era of printing money dawned with Barack Obama’s presidency and his quantitative easing policies, which were mimicked by governments across Asia, including China and Japan.

“China is the champion of debt now,” Leung said, adding that Hong Kong has been used for financial sport by mainland investors pursuing the People’s Republic’s expansion strategies.

China’s great wall of debt has reached $28 trillion, compared with just $2.1 trillion in 2000. That prompted the credit rating agency Moody’s, in May, to downgrade China for the first time in three decades, warning its fiscal health is suffering from rising debt and slowing growth.

But Leung expects the spending to continue, particularly in support of the big engineering companies who invest heavily in Hong Kong infrastructure and have the right guanxi, political connections in Beijing and with its president, Xi Jinping.

“Hong Kong will benefit but it depends on who are you,” he said. “If you can make money from this kind of capital flow you will be welcomed… In Hong Kong only about five to 10 percent of the people can catch onto this ride.

“They will become even richer, but for the rest, the other 90 percent, they cannot benefit.”

Instead, high inflation and an erosion of living standards, possibly leading to further demonstrations, will dominate Hong Kong’s relationship with Beijing amid calls for democratic freedom and even independence from some quarters. 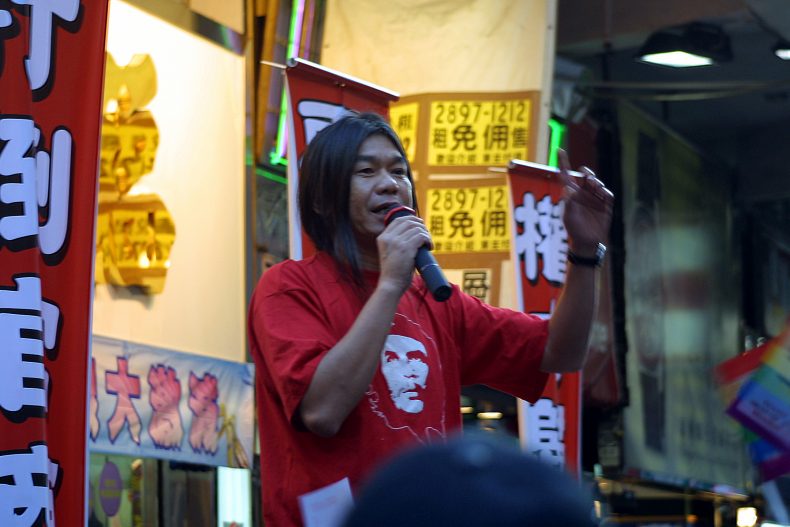 A Trotskyist turned social democrat, Leung has held a seat in the Beijing-controlled legislative assembly since the handover. From his tiny office within the rabbit warren of Hong Kong government offices overlooking Tamar Park, he remains their most vocal critic.

His bookcases are full with a mix of Chinese and English publications and the walls are plastered with memorabilia from the past, including posters of his revolutionary hero, Che Guevara.

Leung likes to quote Chinese proverbs; in particular, river water does not interfere with well water – which means “do not interfere, mind your own business.”

He says Beijing was in absolute control of Hong Kong affairs until the arrival of Leung Chun-ying, also known as CY Leung, on Hong Kong’s political landscape five years ago. Now that power is shared with Xi and his associates.

As chief minister, CY Leung is credited with a breathtaking expansion of guanxi – a notorious Chinese system of social networks and influential relationships to facilitate business – especially in big ticket infrastructure projects and finance.

Leung points to Beijing’s massive buying spree on the Hong Kong stock market, an endless spike in property prices and unfettered big engineering projects that have opened the territory up for the well-connected and well-heeled from the People’s Republic.

Hong Kong is now “shared by Xi and his tops guns who have that control as well,” he said. As a result, Leung adds, Hong Kong will suffer from too many politically connected mainlanders landing here and demanding their slice of the territory.

“They need to think; ‘we should control Hong Kong’ – they’re the player. That means politically they are more aggressive, more confident to say you owe me something, I bring business to you, you need to kow-tow.”

He said it was an important point because this was what emboldened Beijing to abandon its promise of full democracy by 2017 and a guarantee of 50 years of semi-autonomy under “the one country two systems” formula hammered out with Britain before the handover.

Has Hong Kong Lost its Mojo?

As Leung sees it, it’s also a fiscal recipe for political domination that is robbing Hong Kong of the chutzpah that once made it famous. Instead, Beijing is struggling for the hearts and minds of the territory’s wider Cantonese-speaking population.

Many feel their culture has been overwhelmed by mainland Mandarin speakers. Since the handover, the population has swollen by one million to 7.4 million and the median age has risen to 43.4 from 34 years in 1996, with young people leaving for Western shores.

Housing prices are out of reach for most. An anxious student body took to the streets in the Umbrella Movement in late 2014, staging sit-ins and shutting down the central business district; their discontent continues to agitate today.

It was against that backdrop that Xi touched down in Hong Kong on the eve of the 20th anniversary of the handover. The highly anticipated celebrations were muted by a heavy show of military force, the arrest of pro-democracy activists, and a final warning from Xi.

“Any attempt to endanger China’s sovereignty and security, challenge the power of the central government” or to “use Hong Kong to carry out infiltration and sabotage against the mainland is an act that crosses the red line and is absolutely impermissible,” the Chinese leader warned.

At about the same time protestors were being seized, Leung of the League of Social Democrats and the popular student activist Joshua Wong Chi-fung were among them. Leung believes there was a plan to hold them for several days until after Xi had left.

“It was so bad. The police were abusing their power,” he said. “They’re very well equipped. Their target is not to defend people from the invader; their duty is to suppress those people from uprising and causing trouble.”

They were also aided by “200 pro-Beijing thugs,” who Leung said first emerged as the Umbrella Movement was in the ascendency. According to Leung, the men caused a confrontation ahead of Xi’s arrival, which resulted in political activists being driven away in the back of a police van.

Lawyers and the courts, however, intervened and they were released almost immediately.

As a protestor, Leung found fame with a mock coffin he often carried into demonstrations. It became an iconic reminder of the June 4, 1989, crackdown on democracy advocates who had gathered in Beijing’s Tiananmen Square. Thousands were killed by the PLA.

But for the first time in his rabble-rousing history, in perhaps another indication of authoritarian intolerance, Leung was prevented from using the symbolic coffin during pro-democracy rallies ahead of the 20th anniversary of the Hong Kong handover on July 1.

Leung said China was in a very bad way after the June 4, 1989 massacre. Faced with sanctions and unwanted international isolation in the aftermath, Beijing agreed to a British push for full Hong Kong democracy and five decades of semi-autonomy.

“They needed to give a bit,” Leung said.

But that is no longer the case.

“Xi Jinping is like an emperor. He makes sure nothing will spoil his visit and the coffin needed to be gone. I did it for 20 years,” Leung said. “Since emerging as an economic power, their whole strategy has changed.

“Now they think ‘okay we have the muscle, we can walk into Hong Kong and we are the major creditor.’ That means they have more confidence to control Hong Kong financially.”

“They need this to control the casino, in order to become the banker,” he said with a sense of foreboding. “Control the economy, control Hong Kong.”

UPDATE: Just after publication of this piece Leung and three other pro-democracy legislators were stripped of office after a controversial legal judgment found that they did not sincerely take the oath of office, which includes swearing allegiance to China.

The protests that began in 2019 are actually centered on a date nearly 30 years into the future.

How a Hong Konger’s death put Taiwan in a difficult spot amid the storm over Hong Kong’s extradition bill.

After a two-year hiatus due to COVID-19, Mongolia's pre-eminent foreign policy mechanism is back in action.

Domestic and Global Political Impacts of K-Pop: BoA, BTS, and Beyond

Korean entertainment, in particular K-Pop, has provided a unique opportunity for Seoul to improve its global standing.

How One Nation and UAP Fit Into Australia’s Political Landscape

Australia cannot be complacent about the votes that both One Nation and the UAP attracted in the last election.

By Munir Ahmed and Asim Tanveer

Sajid Mir's sentencing could be part of part of Pakistan’s efforts to get off the grey list of the Financial Action Task Force.