The soldier held a knife to Dau’s nose, threatening to slice it if he didn’t answer the questions correctly. Dau had faced the same questions all day: did he fight for an armed group? did he provide fighters food? where were those fighters now?

A procession of Myanmar Army soldiers had tried to one-up each other in extracting answers. The less creative ones stomped Dau with their boots, smacked him with their fists and rifles. Another soldier burned his face and neck with a lighter. One thrust a knife towards Dau again and again, pulling back just before stabbing him.

The scariest, for Dau, was when they stuffed him in a sack and zipped it shut. “It was very difficult to breathe. I was really struggling.”

Dau and another torture survivor told me that they had been taken on the morning of July 7, 2017, when more than 100 soldiers from two of the Army’s infantry battalions stormed into their village in Manton Township, northern Shan State, and arrested eight people, including two women. The Army had been ambushed nearby the night before by the Ta’ang National Liberation Army (TNLA), one of several ethnic armed groups fighting Myanmar’s military in a region near the China border.

After an historic general election in November 2015, long-time democracy activist Aung San Suu Kyi became the de facto leader of Myanmar’s quasi-civilian government, following decades of military rule. She made the peace process and national reconciliation her top priorities, providing hope of resolution to decades of on-and-off-again fighting in Myanmar’s borderlands, and to deep-rooted discrimination against ethnic minorities.

Yet the promise of this potential turning point has been undermined as Myanmar’s military remains wedded to its brutal old tactics, with little apparent pushback from the civilian leadership. The last year has in fact seen an escalation of conflict and abuse. In Rakhine State, Amnesty International and others have warned that Myanmar’s security forces have repeatedly been implicated in potential crimes against humanity against the Rohingya minority.

Though it has received far less international attention, the military has carried out similar patterns of abuse in northern Myanmar. An Amnesty International report released in June documented war crimes and other human rights violations against civilians in Kachin and northern Shan States, including extrajudicial executions, enforced disappearances, torture, indiscriminate shelling, forced labor, and restrictions on humanitarian access.

In late July, humanitarian officials working in northern Shan State, who asked not to be named, told me that the situation has worsened further in recent weeks. They cited more frequent targeting of civilians by the Army, amidst heavy fighting with the TNLA. 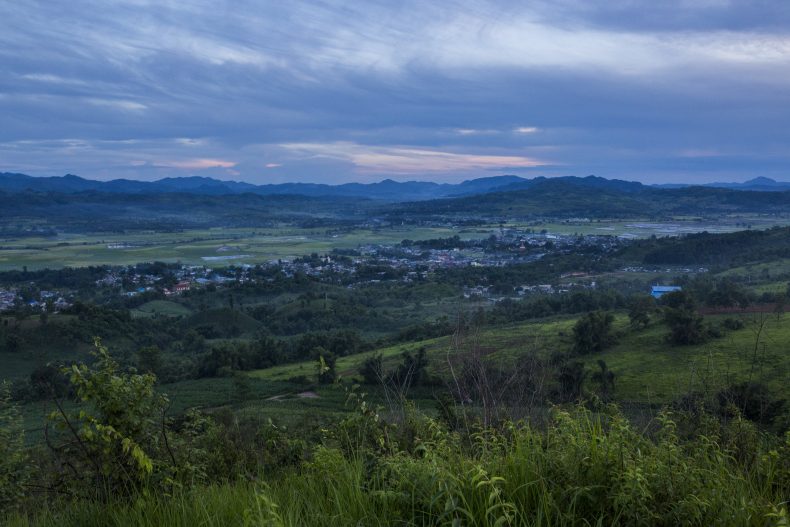 With each blow, Dau told the soldiers yet again that he was a rice and tea leaf farmer, that he had been cutting wood when he heard the sounds of the ambush the night before, and that he promptly hid. But the soldiers didn’t believe him, or didn’t care.

Dau and the others arrested and tortured from morning to evening that day are from the Kachin and Ta’ang ethnic minorities. Kachin and Ta’ang civilians told us that even during lulls in the fighting, they are treated with suspicion by the Myanmar Army, for their perceived support for the TNLA and other armed groups in the area. When something like the July ambush on the Army happens, soldiers often launch reprisal attacks against civilians in nearby villages, in cruel acts of collective punishment.

Two weeks earlier, on June 23, the TNLA and Myanmar Army fought near the Ta’ang village of Man Lan, also in northern Shan State. The next morning, scores of Army soldiers descended on the village. They initially arrested a small group of people, before forcing everyone into the local monastery, where they were held for four days and three nights.

Daw Aye Hman, 66, was with her husband and son when soldiers arrested them in their home and demanded they go to the monastery. “They were pointing their guns at us and shouting,” she recalled. “They were cursing at us. We were very afraid.”

The soldiers removed and tortured several people, including relatives of alleged TNLA fighters, according to witnesses I interviewed and local human rights defenders who investigated the incident. The soldiers also photographed and questioned all the men.

Daw Aye Hman’s son, Kyaw Aung, 38, was among those interrogated. Born with a developmental disability that also affected his physical movements, Kyaw Aung still lived with his parents and helped them out on their farm.

“He can’t reply well to questions,” Daw Aye Hman said. “They were asking if anyone was a [TNLA] soldier, and my son, he didn’t know how to respond. They also saw a scar on his face, from when he had fallen down. [From the scar], they suspected he was a soldier.”

Several Myanmar Army soldiers struck Kyaw Aung repeatedly on the head, with their fists and pieces of wood. Witnesses saw soldiers beat him inside the monastery, before taking him away.  Kyaw Aung’s corpse was later found discarded between Man Lan and a neighboring village.

“My son won’t be in the village,” Daw Aye Hman said, still displaced more than a month after the incident. “I don’t want to go back.” 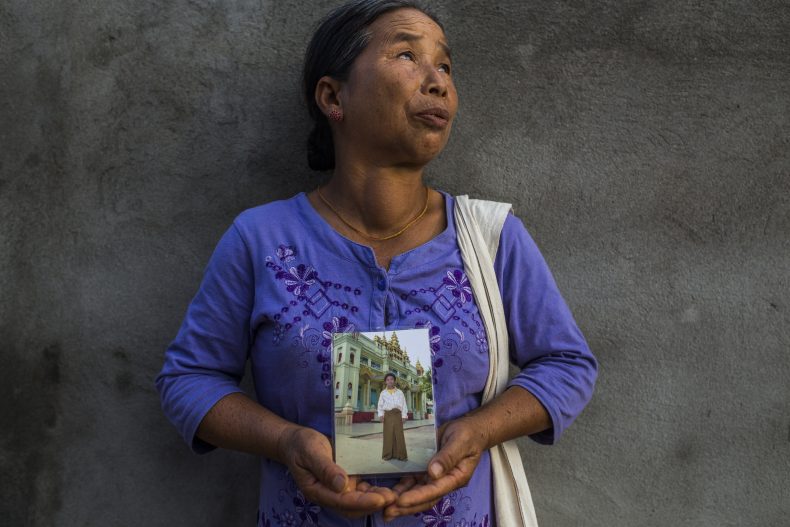 Daw Aye Hman, 66-year-old Palaung woman from Man Lan village, Namhsan township, stands for a portrait as she holds a picture of her son, Kyaw Aung (38) who was suffering from mental and physical disability and was beaten to death by the Tatmadaw, Northern Shan State, Myanmar, July 27, 2017. © Minzayar Oo – Panos / Amnesty International

As relations normalize between Myanmar and the international community, the Army appears unwilling to shed the heavy-handed tactics that contributed to the country’s decades-long status as a pariah state. Even war crimes go unpunished in all but the rarest of cases, as the military still controls its own judicial processes.

Among more than 100 victims of human rights violations Amnesty International has interviewed in northern Myanmar during the last five months, not one had filed a legal complaint. Most laughed at the idea. They said it was more likely they would be killed or jailed themselves than see a credible investigation into a soldier or commander suspected of responsibility. Past experience backs that up.

Many people from northern Myanmar’s ethnic minorities believed the 2015 elections would spur changes to this legacy. Now they describe Aung San Suu Kyi’s government as complicit, after watching it fail to take action against, or even to denounce, the military’s violations against civilians. Indeed, the government has supported the military in undermining humanitarian access to conflict-affected areas.

The government has also announced it will deny access to a UN fact-finding mission, mandated to investigate human rights violations in the country. By shielding the military’s actions from independent examination, Aung San Suu Kyi’s government has doubled down on the military’s culture of impunity.

When we last spoke at the end of July, Dau told me that some of the same soldiers who tortured him were still based in his village. He is forced to see them regularly, as he walks to his farm.

“We don’t want to be afraid,” Dau said. “We need the Myanmar military to live peacefully with the ethnic communities. I don’t want them to torture us again.”

*Dau is not his real name. His name has been changed, and the name of his village withheld, in order to protect him against reprisals.

Matthew Wells is a Senior Crisis Advisor at Amnesty International. He is just back from northern Shan State and previously authored “All the Civilians Suffer”: Conflict, Displacement, and Abuse in Northern Myanmar.

Torture – and the fear that it engenders – has been central to the military junta’s efforts to quell popular resistance.

Challenges to Democracy and Hopes for Peace and Justice in Myanmar

For a multicultural society like Myanmar, the greatest test of democracy is whether the government treats its minorities equal to the majority.

Myanmar Must End Its Internet Shutdown

Myanmar’s internet shutdown is the world’s longest, depriving its people of their rights.

Myanmar’s Fragile Democracy Needs the US, Not China

The US and its allies must engage more directly with Myanmar, lest China's influence derail its democratic potential.