There is, by all accounts, a rape epidemic sweeping through India at this moment. The world hears the roar of considerable public anger at both the impunity of rapists, the sensationalist media reportage, and the discognizance of the authorities.

What we do not hear are the voices of the rape survivors, or about their lives and daily tribulations.

Aneek Chaudhari, an independent filmmaker and film theorist from Kolkata in India, seeks to address this lacuna in social discourse through his new film White. A silent film, it was screened at the Cannes Festival in the Marché du Film (Film Market) category on May 11. 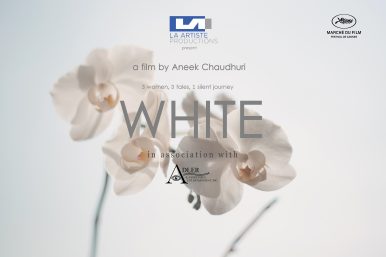 The poster for White.

Chaudhari deliberately chose to make a silent film, both to highlight the essential invisibilizing of the trauma of rape survivors and as a counterpoint to the ex post facto cacophony that surrounds the act of rape.

“Silence is the best way to describe agony and struggle. How can ever words or dialogues portray a victim’s fightback?” Chaudhari explained. “I do not find it very realistic. And rape, I believe is a universal topic that needs to be dealt with on a common platform. Hence, silent cinema can be the best way to commune with the target audience, which is based globally.”

White tells three stories, the first about a factory worker, the second about a single mother, and the third about a married couple after the wife gets raped. Three women who lead entirely different lives suddenly have something in common but come out of life-defining traumas in ways unique to each of them.

A statement by Chaudhari reads, “Rape is a serious issue that many modern-day directors portray in a form that victimizes a person. White is a film that in turn talks about the consequences of rape and how a victim confronts her position after rape and attempts to live a better life.”

The film highlights the post-event ordeal that a rape survivor faces. In India, the rapist is not the only perpetrator — a rape survivor’s trauma is protracted and multiplied by a society that stigmatizes her unendingly. White focuses on her combat.

“Rape itself is a multi-dimensional term and fits itself to many issues going on. Here in my film, I am just talking of one of its forms. Now I must begin by stating that personally I am very sensitive to women-related topics. More precisely, women-related subjects have form an eminent part in my life as I have women surrounding me, be it a sister, mother, or my fiancée. So, automatically, this is worth considering to make a film on this topic,” Chaudhari told The Diplomat.

He is planning to release the film in India this year after the hectic international film festival season is over.

Even as independent filmmakers across the globe are adding feathers to their caps, indie cinema is struggling in India. “The situation for independent cinema is worse in our country,” says Chaudhari. “People start to show great interest in your ventures and then, slowly, they vanish. There is always some grease to skate over when it comes to making alternative cinema here.”

A new silent film by an Indian indie filmmaker highlights the unending horrors of the aftermath of rape.

Sexual Violence Against India’s Most Vulnerable

A Dalit girl was gang-raped, murdered and forcibly cremated in New Delhi.

Violence Against Women in India Must End. Now.

In India, a Man Can Still Legally Rape His Wife