For Mexican artist Raúl Gasque, Taiwan is a metaphorical canvas. Having lived on this island for three years, he has recognized that its geopolitical weakness can be remolded into something officially unofficial. He created his latest art project, Crayon Diplomacy, as a dialogue between the Taiwanese, Mexicans, and other foreigners living in Taiwan.

His home country does not officially recognize Taiwan, a result of the government’s adherence to Beijing’s “one China” policy and sensitivity over cross-strait issues. Mexico therefore has neither an official embassy nor an official ambassador to Taipei. The government, like many governments, operates a trade and culture representative office in Taipei, staffed by career diplomats and Foreign Service workers who handle Mexico’s visa, passport, and authentication necessities.

Gasque has turned this diplomatic “negative space” into his canvas with his project. With the help of Mexico’s representative office, the installation features several tables of abstract work meant to be touched, handled, and experienced through all the senses.

The idea is for the visitor to leave an imprint on the artwork, and as it deteriorates over time, it represents a collection of stories from those who have manipulated it.

“It’s a nondiplomatic solution to a diplomatic problem,” Gasque says. 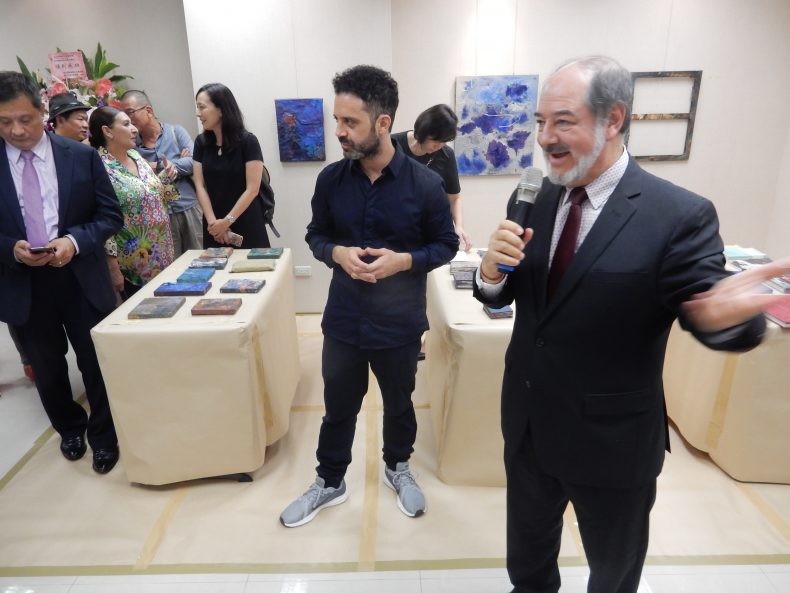 The majority of the hands touching his artwork belong to Taiwanese who are planning trips to Mexico. Mexicans and other foreigners living in Taiwan are also responsible for leaving their fingerprints.

Gasque is hopeful to develop Crayon Diplomacy exhibits throughout East Asia. He feels the cultural and interpersonal connections between his country and this corner of the world are lacking; though Mexico had once had a very strong connection to the Philippines, geopolitics of the colonial age prevented Mexico from developing greater links in the region.

“But that’s the only case, I would say.”

Mexico may have left a mark on Manila, but two-way understanding between Mexico and Asia seems to stop there.

“[If you] go to Mexico and ask about East Asia, it’s really limited. That’s why I wanted to establish this in East Asia. Mexico and East Asia have an increasing commercial exchange, but cultural and human exchange is really limited. More than that, super limited. We don’t know anything about [either] side.”

“Crayon diplomacy is an attempt to create bonds between countries with art and with abstraction through crayon,” Gasque explains. 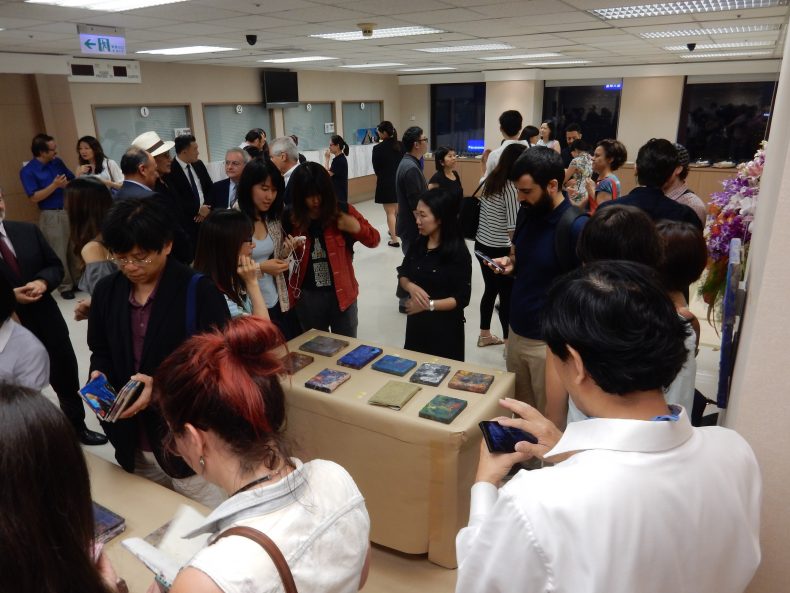 An international audience on the opening night of Crayon Diplomacy. Photo by James X. Morris.

Gasque’s work is interactive abstract automatism. He wants to connect with those walking through the office. He encourages people to handle his art, to add to it, and to imprint something. And of course, there are crayons.

“For example with protocols [you have] events, international affairs, human rights, but I would say that in these times we’re actually seeing other kinds of scenarios. [Today,] computers and corporations are taking the part that these protocol work as. Crayon diplomacy can actually, in some other way, in a utopian scenario, fulfill the other scenarios and the other spaces.”

The exhibition is spread across four tables and hanging on the walls of the office’s waiting room. At one table are a collection of books by Mexican and Taiwanese artists who inspired his work. At another is a collection of calligraphy books filled with abstract shapes made of various materials. A third table contains small canvases covered with melted materials.

“They’re made mostly with crayons and oil bars,” he says. “They were forged. They were on fire before.” 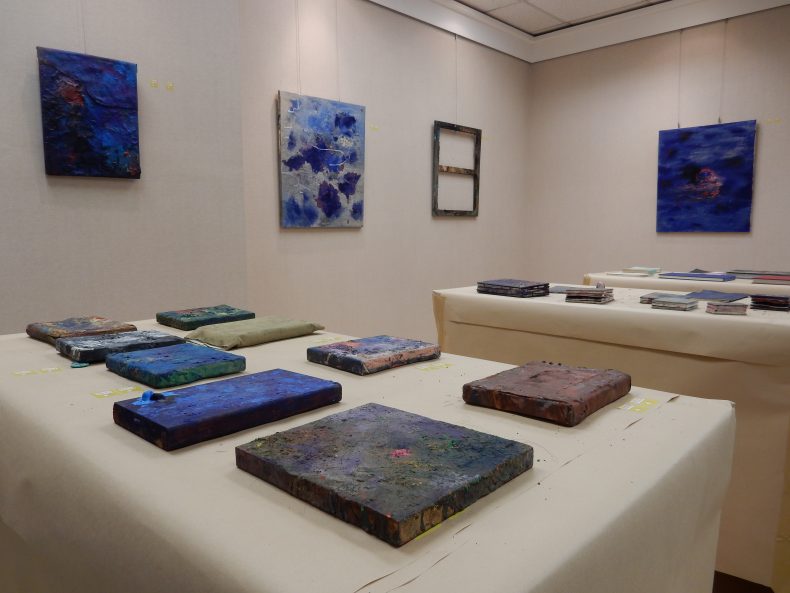 Gasque’s artwork was originally intended to be shared with friends but grew into something more. Now on display, Gasque encourages people to pick them up and allow them to be worn down. “Touch it. Feel it. And it’s gonna change, and it’s still changing and it’s still evolving. And that’s all about the abstract and automatism. How these pieces can evolve in forms and change. Just like international affairs. Because that’s crayon diplomacy too.” Photo by James X. Morris.

I joined him as he was installing a new notebook at the fourth table. The notebooks here are accompanied by a palate of crayons and oil bars for anyone to draw and doodle with.

“These are things in the instructions, and the people actually follow the instructions. I’m really happy about that. The instructions say here ‘please do not try to be logical.’ Draw or write the first thing that comes to your mind. So that’s super important.”

On the back wall, several sheets of paper hang over a map of Mexico. This is common of Gasque’s interactive projects: asking visitors to express their own aesthetics. The paper is hand-made in Taiwan; these sheets are typically meant for calligraphy. Its placement over a map of Mexico was on purpose.

“It’s a symbiosis. It’s a Mexican map that represents a structure.”

The blank paper is for visitors to make whatever they want of the Mexico-Taiwan dialogue.

On opening night at the exhibition in June, Taiwan’s young adults, typically shy and reserved, spent the most time drawing on the paper. 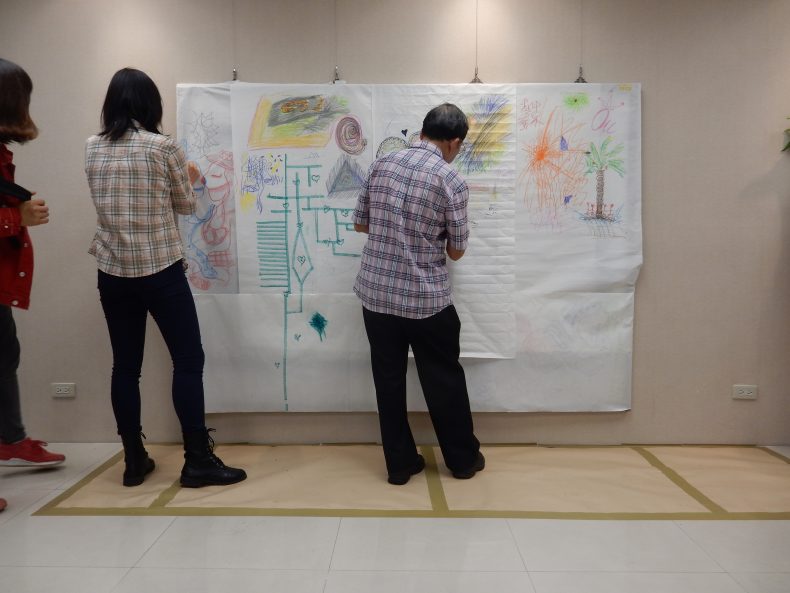 An act of dialogue: Taiwanese paper covers a map of Mexico as a canvas for an international audience to express their aesthetics on the opening night of Crayon Diplomacy (June 6, 2018). Photo by James X. Morris.

Gasque points to some doodles.

“Is this Mexican or Taiwanese? You can’t tell. This is really an international language. And this is actually one of the goals of this exhibition… to make this symbiosis. So you really can’t tell.”

Despite the blurring of identity through the art, artists do have some tells that give away their culture.

“You can tell there are some people who did it in a very cautious and respectful way. The Taiwanese artists, their work is really, really delicate in how they interact with something. It’s like calligraphy. They pay attention to the details. Usually they [handle] the paper with care. They worked with these elements before. From my experience, at least what I can find, in Taiwan there are a lot of things are about precision. Or East Asia, perspective is precision. Think about it. You have to be precise. Even in your mistakes.”

Cultural background determines the amount of attention and detail given to the paper. For Gasque, the differences are fine. It allows two cultures to express themselves on the same canvas.

“The day-by-day scenarios are the difference between two perceptions. When they come together you can make something beautiful and deep like this.”

Eventually the pieces of work will have to rest. The manipulation and energy they receive from human contact will wear them down — perhaps until they’re blank canvases again. Wear and tear is fine, according to Gasque. But to preserve the information — the dialogue — they have been collecting, the manipulations will eventually come to an end, and new pieces will be introduced in their place to collect and reflect a new dialogue in a future point in time. 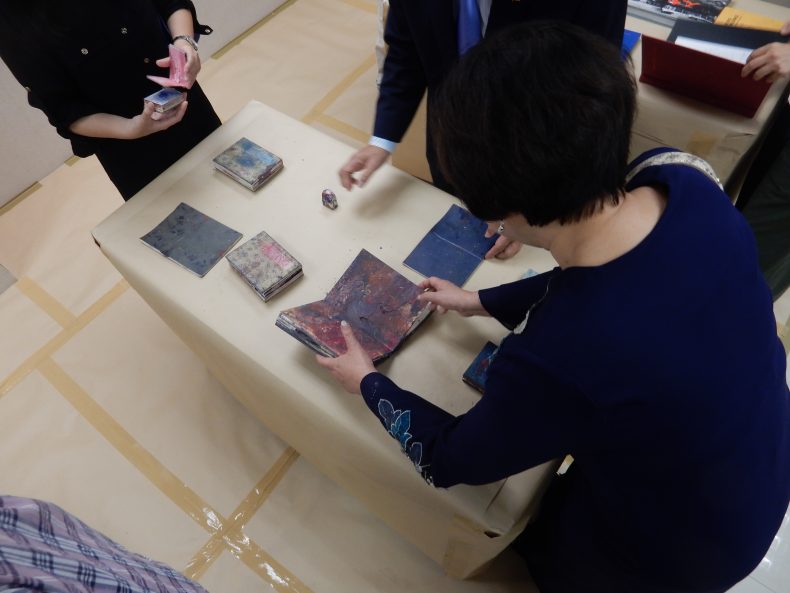 “When people actually touch them and manipulate them, and they’re in public places like this one, they’re receiving a lot of information. It’s a lot of energy what you have over here,” explains Gasque. Photo by James X. Morris.

In Taiwan, geopolitics and official diplomacy has been a losing game. Since the 1970s Beijing has picked off Taipei’s diplomatic allies, leaving only a handful of countries to recognize it. Taiwan has been an important economic center in East Asia for decades, however, and has managed to maintain its connections through establishing semi-official trade and cultural representative offices to handle de facto diplomatic affairs.

Gasque provides updates on his projects, events, and upcoming exhibitions on his Facebook page, How Do You Translate A Metaphor?

The Crayon Diplomacy exhibition is on display in the Mexican Trade Services, Documentation and Cultural Office, located on the 15th floor of the International Trade Building, No. 333 Keelung Road, Sec. 1, Xinyi District, Taipei. The installation is viewable during normal business hours but is closed at lunch. A closing party will be held later this summer when the exhibit is scheduled to move (date TBA).

One artist’s use of Taiwan’s diplomatic weakness as a canvas for dialogue.

Taiwan's new representative office in Hargeisa not only gives Taipei another connection to the African continent, but also establishes a new model of relations that could be extended to other states.

The Strange Saga of Taiwan’s Short-Lived Office in Guyana

The closing of the office was a classic example of how U.S.-China rivalry served to complicate what should have been an innocuous diplomatic agreement.

Under Pressure From China’s Authorities, Didi Is Delisting From the New York Stock Exchange

Since its IPO on the NYSE, Didi has been the target of investigations and penalties from China’s Cyberspace Administration.

Japan Steps in to Support India Against China in South Asia

The Quad may still be a mist-covered structure but Indo-Japanese cooperation against China is becoming more concrete.

The Long Shadow of the Asian Financial Crisis in South Korea

Seoul’s approach to pandemic relief is colored by the formative experience of the 1997-98 crisis.

India’s Nagaland Erupts in Protests Against Army Killing of Civilians

Calls for revocation of the Armed Forces Special Powers Act are growing louder in the restive state.