Monday was meant to be the first day back to school for students in Hong Kong. Instead, it may have been the first time, for many, that they joined a public protest against their government authorities.

On Monday afternoon, students wearing school uniforms from all over Hong Kong descended on Edinburgh place in Central District in Hong Kong.

But added to their uniforms was an extra accessory. Almost without exception, all of the students, many barely in their teens, wore face masks.

This is what the end of a summer of protest, and the beginning of the school term in Hong Kong has come to. Students who may never have heard the word “extradition” before June of this year are now so afraid of being identified by ubiquitous face recognition cameras and technology throughout Hong Kong that they are forced to wear masks to conceal their young identities.

A makeshift stage had been assembled for speakers and musicians. Familiar chants from this summer’s demonstrations, including this past weekend’s large protests throughout the city, were called out from the stage. The students responded to each in now well-practiced unison, repeating “Five Demands,” and “Return the eye,” referring to the first aid worker who lost an eye when shot at close range in a mid-August demonstration. The allegation is that she was shot by a police officer firing rubber bullets.

As musicians sang and played guitars, the crowd waved their mobile phones slowly back and forth as they would at a concert anywhere in the world.

But major differences distinguished this rally from a peaceful summer’s sing-a-long. 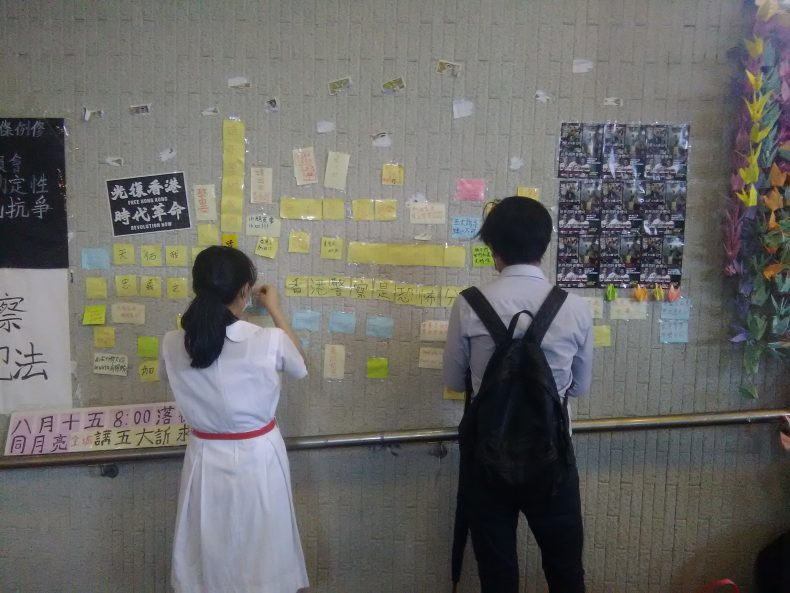 In order to get to Edinburgh Place from the Central MTR station where most had arrived, students had to walk through an underpass filled with signs, posters, purposeful graffiti, and a wall of post-its and other notes supporting the causes that this movement is now about.

Middle school students read words such as “Chinazi” written in large bold letters on the floor of the large tunnel.

Sixteen-year-olds read posters challenging the patriotism of China’s President Xi Jinping, alluding to the many members of his family who ostensibly live abroad and hold foreign passports. 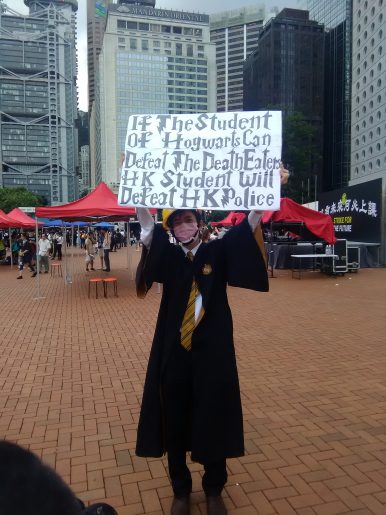 Recently post-pubescent tweens were greeted by a lone student in Harry Potter garb brandishing a hand-written poster proclaiming, “If the Student of Hogwarts Can Defeat the Death Eaters, HK Students Will Defeat HK Police.”

Timeless principles of the rights of individuals and the yearning of all human beings for self-determination are being demanded not just by black-clad protesters, some of which have resorted to violence and vandalism, but also by the future of Hong Kong: The generation that was born under Chinese sovereignty, but is now questioning its validity.

Everything that happened at the student rally Monday in Hong Kong would be considered seditious in mainland China.

In fact, the movement in Hong Kong is so foreign of an idea by now to the mainland Chinese counterparts of Hong Kong’s youth, that many who know of it dismiss it all as the folly of “spoiled rich kids,” as one business owner in Zhejiang Province said last week.

The concept of two systems meant to reunite brethren of the Chinese nation has never seemed so distant.  Monday’s rally was held by a fully-politicized generation of teenagers who will lead Hong Kong into the second half of the 50 years of freedom and autonomy that it was promised under the Basic Law.

Much of this generation, as evidenced by the scenes Monday, believes that the Basic Law is now in tatters. Where, then, will they lead Hong Kong when they so clearly don’t want to lead it toward Beijing?

From Tiananmen to Hong Kong: An Evolution of Protesting in China

The main differences boil down to experiences of freedom, realism, and technology.

Why the Mutually Assured Destruction Rhetoric in Hong Kong Is Dangerous

To pull Hong Kong back from the edge, all potentially influential parties must act – with strategic savvy.

Such legislation was last proposed in 2003, sparking protests.