In the high mountains of Bamiyan, young Afghans are leading a movement that thinks very differently than their parents’ generation about their environment and country. Instead of picking up arms and joining militias they are hopping on mountain bikes and joining local ski clubs.

“I started mountain biking because my village is surrounded by mountains and we have got the best places for mountain biking,” Reihane, one of eight women to race in Mountain Bike Afghanistan’s (MTBA) 2nd annual Hindukush MTB Challenge last week, told The Diplomat. Living in a country where the lives of women are heavily circumscribed by patriarchal culture, outdoor initiatives are at the forefront of providing equal access for all genders.

All together, 27 Afghans competed over seven laps of a challenging two-kilometer cross-country loop. Just over a year old, MTBA’s purpose stretches far beyond holding races.

“Mountain Bike Afghanistan was created to help Afghans tangled with and overwhelmed by the conflicts realize that we as a nation can do amazing things we have been ignoring,” Farid Noori, MTBA’s CEO and founder, told The Diplomat. “It’s all about shifting the public focus from the bad and the miserable to the good and exciting.”

MTBA joins a broader collection of initiatives in Bamiyan and across the country that harness the potential of sports to develop community and resilience. MTBA’s manager, Sajjad Husaini, and his training partner Alishah Farhang are pioneers of a nascent ski culture in Bamiyan. Eight years ago a Swiss journalist brought skis to Husaini’s village and now he and Farhang compete internationally, just missing qualification for the 2018 Olympics.

The Bamiyan Ski Club started with just 10 members. Now there are eight ski clubs with over 250 women and men hiking into the Afghan mountains to ski. Husaini told The Diplomat he sees similar levels of enthusiasm for mountain biking spreading in Bamiyan. 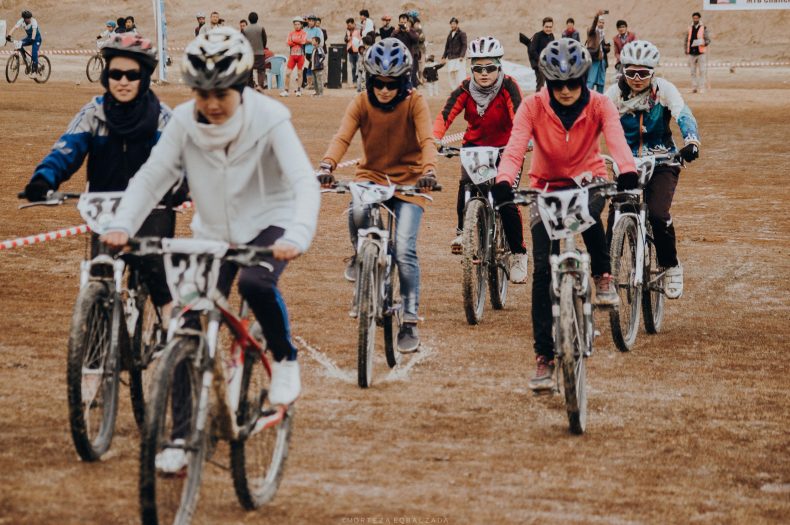 Start of the women’s race. Photo by Morteza Eqbalzada.

What makes MTBA unique compared to other outdoor projects in Afghanistan is that it was conceived, created, and now run entirely by Afghans. Having trained in St. Moritz, Switzerland, Husaini believes there is potential to replicate the Swiss town’s economic success with tourism in Bamiyan. The province is home to the stunning lakes of Band-e-Amir National Park, the UNESCO World Heritage site-listed 6th-century Buddha niches, and, of course, the endless mountains to hike, run, bike and ski among.

Bamiyan is able to incubate Afghanistan’s outdoor movement thanks to its relative stability. Protected by near impenetrable mountain ranges, conflict in neighboring provinces rarely spills into Bamiyan. But developing tourism across the country will require greater levels of basic security nationally. MTBA’s leaders see their outdoor movement as a way to contribute to conflict resolution and the country’s recovery.

Noori’s family has not left Kabul since 2006. “Partly because of the ongoing conflicts,” he said, “we do not know our country at all. We are strangers in our own land. Intra-regional and intra-ethnic exposure is very limited, almost non-existent.”

Instead of seeing mountains as obstacles that separate Afghans from each other, Noori sees them as national, natural assets. “Their potential transcends just tourism, adventure and economic returns. They are a refuge to heal from the depression the long war has caused deeply in every single household.”

To reach the highest levels of the sport, Noori lives in the United States where he has access to professional races and trails to train on. Living abroad, the affects of decades of war in Afghanistan are impossible to escape, but riding helps. 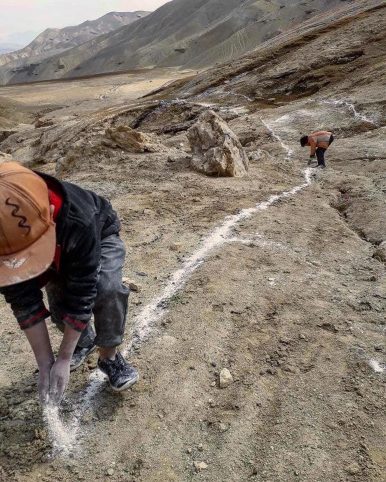 Local kids volunteer to set up the course. Photo by Sajjad Husaini.

“The sorrows are inevitable, so nothing, really, can offer full remedy,” he said, “but I have found that the outdoors and riding my bike helps me feel much better, at peace, and stay resilient.”

Afghan society remains largely organized by patrimonial relationships. Noori said the attachment of his generation to its country is different from the national duty his elders try to instill. Demands for allegiance feel vague and distant to him. The mountains offer a different way for active young Afghans to connect and foster a love for their home.

“Getting people outside to enjoy these mountains and to push the boundaries of our comfort zones allows us to get to know our country better, and meet people from all walks of life, religious and ethnic backgrounds,” he said. That isn’t always easy to accomplish.

Jumakhan, who won the men’s division of the Hindukush MTB Challenge, told The Diplomat it was difficult for him to become a mountain biker. “The people of Bamiyan are religious and have bad thoughts about cycling,” he said. As the only supporter of his family, he also has to work hard to feed his family, leaving little time to train.

Making the sport more accessible is central to MTBA’s mission. Noori is currently traveling the east coast to raise capital, build a community of support around MTBA in the United States, and promote a deeper understanding of his country.

Ian J. Lynch recently graduated with a Masters in Middle East, Caucasus, and Central Asian Security Studies from the University of St Andrews in Scotland. He previously led the development of girls’ education programs in Afghanistan. He tweets at @Ian_J_Lynch.

A group of young Afghans is looking to put the country on the winter sports map and change perceptions about their war-weary nation.

Afghanistan only has 400 ventilators for a population of more than 36.6 million. A cheap way to add to that stock will save lives.

An Afghan Woman Takes on Society’s Taboos, One Tattoo at a Time