This week a number of Iranian officials, including the Supreme Leader, used the recent revelations of U.S. National Security Agency spying to justify and celebrate the 1979 seizure of the U.S. embassy in Iran.

In the aftermath of the Islamic Revolution in Iran, on November 4, 1979 university students and supporters of Imam Khomeini overran the U.S. embassy in Tehran and held 52 American hostages in the embassy hostage for 444 days. The students-turned-hostage-takers justified their actions on the grounds that the U.S. embassy was really a cover for a Central Intelligence Agency spying operation that aimed to reverse the revolution. Their fears that the embassy was a “den of spies” as they called it had its origins in a CIA-sponsored plot in 1953 that overthrew popularly-elected Iranian Prime Minister Mohammad Mossaddegh and restored the Shah to power.

The Iran hostage crisis, as it is known in the U.S., was significant in the development of U.S.-Iran relations as well as in the political evolution of the Islamic Republic of Iran. Throwing his support behind the hostage takers—in contrast to his strong and immediate opposition to Communist students briefly seizing the U.S. embassy earlier in the year—Imam Khomeini and his followers used the crisis to purge their less radical, political rivals and consolidate their grip on power.

In light of this, the hostage-taking has been an annual celebration in Iran ever since, where it is called National Day of Campaign against Global Arrogance (a name Iran uses to refer to the U.S.), Students’ Day and 13 Aban or November 4, the date of the initial embassy takeover. This week Iran celebrated the 34th anniversary of the event and, in the context of ongoing negotiations with the U.S. and P5+1, the Islamic Revolutionary Guards Corps made a larger than usual effort to bring out crowds for it.

13 Aban this year also took place in the context of the ongoing leaks by Edward Snowden about the U.S. National Security Agency’s global spying operations. Many Iranian officials addressing crowds for the anniversary drew a direct linkage between the Iranian students seizing the U.S. embassy and hostages and the recent revelations that the NSA was using U.S. embassies worldwide to spy on host countries, a practice that is widely if not universally practiced by nation states.

Foremost among those making this connection was Supreme Leader Ali Khamenei, the most powerful official in the Islamic Republic of Iran. In a speech to university students to commemorate the 34th anniversary of the crisis, Khamenei reportedly remarked:

“The faithful and courageous student youths who captured the American embassy in [1979] discovered the truth and real identity of this embassy, which was in fact a spy nest, and put it out there for the people of the world to see…. On that day, our youth named the American embassy the spy nest, and today, after the passing of more than three decades, American embassies in European countries that are America’s partners have been named spy nests. This matter demonstrates that our youth were more than thirty years ahead of the world’s calendar.”

His office later took to Twitter, which is technically banned in Iran, to reiterate this message. Tweets sent from Khamenei’s official account read: “At this moment, Leader’s meeting with students: 30 years ago, our young people called the #US embassy #DenOfSpies… Today, #US embassies in closest countries to the US are called “#DenOfSpies”; it means that our young revolutionaries are 30 yrs ahead.” Hours later a picture carrying quotes from Khamenei’s speech was also posted on Twitter (see below). 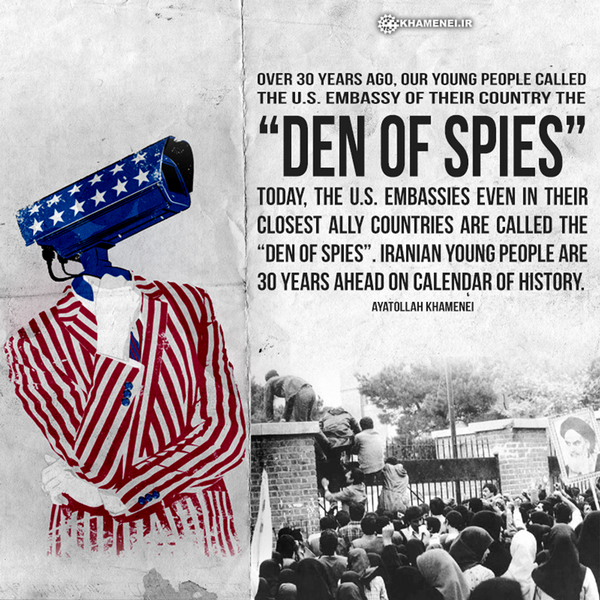 A number of senior Iranian officials seemed to following Khamenei’s lead on arguing that the NSA revelations vindicated the hostage-taking.

Former nuclear negotiator and presidential candidate, Saeed Jalili, was quoted in the Iranian press as saying: “The Iranian nation announced 34 years ago that the US mission is a place for espionage and (hatching) plots…Today after 34 years, the US friends have admitted the reality that Imam Khomeini had noticed (i.e. the US embassies’ espionage operations against their countries) and they are even protesting at it now.”

“34 years after the seizure of the (US) spy den in Tehran, now that the White House's shameful wiretapping of conversations and spying on the statesmen and officials of the other countries has been exposed, calling the US embassies in the world countries, especially its European allies, as spy dens has become a global issue, and nations consider the negligence and unintelligent trust of their governments in Washington as the main cause of the violation of their citizenship rights and infringement of their privacy.”

The Chief of Staff of Iran’s Armed Forces Hassan Firouzabadi also reportedly echoed the sentiment that the Snowden leaks vindicated the students’ decision to overrun the embassy and hold most of its staff hostage for well over a year. Firouzabadi also was quoted as defending Iran’s “Death to America” chant, while clarifying that it didn’t apply to 99 percent of the American people but only the 1 percent who are “arrogant, capitalist and Zionist Americans.” Jalili also used his speech to clarify that “Death to America” only applied to one percent of Americans.

This is not the first time in recent memory that Iranian officials have tried to draw direct parallels between Iran’s Revolution and current events. Early on in the Arab Spring Supreme Leader Khamenei said the revolutions in the Arab world that had toppled leaders like Hosni Mubarak in Egypt were natural extensions of and had been inspired by Iran’s own 1979 revolution. His comments at the time were derided by Egyptians. Nonetheless Iran lobbied Egypt relentlessly to re-establish diplomatic relations with Iran following Mubarak’s ouster. The Mohammad Morsi administration finally agreed to allow Iran to station a charge d' affaires in Cairo, but his residence was stormed nearly immediately upon his arrival by radical Salafists protesting the decision to establish ties with Shi’a Iran.

To no one’s surprise, NSA documents that Edward Snowden has leaked have shown that Iran is one of the agency’s most targeted countries.

Iran and the United States Locked in Cyber Combat

A recently published N.S.A. document reveals an ongoing cyber war between the United States and Iran.

Hagel: Pentagon 'Will Maintain Approach of Restraint' in Cyberspace

Hagel's remarks supporting the National Security Agency will do little to ease international tensions over cyber-space.

Despite their own religiosity, American politicians express alarm at the theological nature of Iran’s political system.

The whistleblower behind the NSA leaks has come forward. Will Beijing decide his fate?

The state’s disturbingly high rate of Indigenous incarceration is a direct result of punitive measures that push people – including minors – into the prison system.

Toru Kubota, 26, was arrested in July while photographing and filming an anti-coup protest in Yangon.

The worries echo a litany of complaints made by U.S. military officials about the fifth-generation fighter.

Taiwan and the ‘Origin’ of the Normalization of China-Japan Relations

Why the current issues in the relationship can be traced to the 1970s.

Aung Moe Myint and his Dynasty International company are accused of procuring Russian-made arms from Belarus for the military.