Have you heard of the James Shoal (Zengmu Ansha in Chinese)? Do you know where it is? My last blog article talked about the perception gap between China and its neighbors. The story of James Shoal is a good example of this huge difference in perception.

For anyone who received an education in China, Zengmu Ansha (James Shoal) is a very familiar name. For example, in the current eighth grade geography textbook published by People’s Education Press, a map of China with the nine-dashed line can be found on page 4. For identification purposes, the editors used an arrow to point out James Shoal. Also, the map has a call-out box with a note: “The southernmost point of our country’s territory is Zengmu Ansha in the Nansha (Spratly) Islands.” Students are asked to use a ruler to measure from the northernmost point of China to Zengmu Ansha and then to calculate the actual distance based on the scale of the map. The correct answer is 5,500 kilometers (3417 miles). 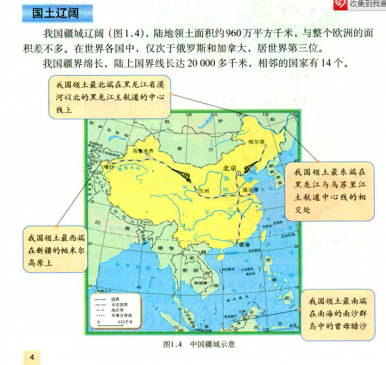 James Shoal is a small bank in the South China Sea, lying under the water at a depth of 22 meters (72 feet). It is located about 80 km (50 mi) from the Malaysian coast and about 1,800 km from the Chinese mainland. Both the PRC and ROC officially claim the shoal as the southernmost feature of China. Malaysia also claims the shoal. As the bank is under the water, there is no way to erect a sovereignty stele. On April 20, 2010, however, the Chinese Marine Surveillance Ship-83 came to the water around the shoal. Several officers of the ship threw a sovereignty stele into the water. The stele is a big and heavy marble engraving with the Chinese characters Zhongguo (China). Another report from 2013 tells the story of Chinese naval officers and soldiers participating in an oath-taking ceremony on waters off Zengmu Ansha, pledging to safeguard China’s territorial integrity and marine interests.

This narrative about Zengmu Ansha as China’s “southernmost point” is not some new propaganda from the CCP. China’s first official South China Sea map with interrupted lines was published in 1948 (though drawn in 1947 for internal purposes) by the Republic of China’s (ROC) Kuomintang (KMT) government. There are also documents reporting that a map created by cartographer Bai Meichu in 1936 used solid lines to encircle the Paracel Islands, the Macclesfield Bank, and the Spratly Islands. This 1936 map marked Zengmu Ansha in the Spratly Islands as China’s southernmost boundary in the South China Sea. Since the 1940s, generations of Chinese have learned from their geography textbooks that Zengmu Ansha is the southernmost point of China’s territory. Different generations of Chinese have also conducted a similar exercise in their middle school geography classes: the students use a ruler to measure the distance from the northernmost point of China (Mohe, near the Amur River, at the latitude of 53° 29′ north) to Zengmu Ansha (at the  latitude of 4° 15′ north) and then feel very proud of their country’s vast territory.

In an article in the June 2013 issue of China National Geography, Shan Zhiqiang, the executive chief editor of the magazine, wrote the following statement:

During my sabbatical leave last year, I taught a course at one of China’s top universities as a visiting professor. I once asked my class whether they agree with this statement by Shan Zhiqiang, most of the students raised their hands.

In many territorial disputes, maps have been used by the claimants as important tools to give justifications for safeguarding or recovering the disputed territories. Maps are also used in the educational system to forge the younger generations’ concept of national boundaries and sovereignty. Map and textbooks are among the most important discourses of identity and worldview for a nation state, and China is not alone in making use of them. In recent years, we have seen that many South China Sea claimant countries have paid new attention to education and narratives for the purpose of strengthening their citizens’ perceptions about their own territorial claims, including the revisions of maps and textbooks. For example, the Philippines officially renamed the South China Sea waters off the country’s west coast the “West Philippine Sea” in September 2012. Vietnam is also now calling the South China Sea the “East Sea.” The Vietnamese “patriotic education” and social narratives regarding the South China Sea disputes in the past one or two decades have also directly contributed to the rise of anti-China sentiment in today’s Vietnam. The recent protests and riots are among the direct consequences.

Perception, not anything else, is the most dangerous thing in the South China Sea.

Zheng Wang is the Director of the Center for Peace and Conflict Studies at Seton Hall University and a Global Fellow at the Woodrow Wilson Center.

Taiwan Will Not Cooperate With China in South China Sea

Plus, reactions to Pyongyang's nuclear ambitions and Chinese views of Malaysia after Flight 370. Friday China links.

The US Announces a New Position on Maritime Claims in the South China Sea: First Takeaways

In a welcome development, the revised U.S. position brings American policy in line with the July 2016 arbitral tribunal ruling.

Both sides are emphasizing the disputed waters, but for different reasons.