When Kim Jong-un took power at the end of 2011, the then twenty-something North Korean leader became the youngest president of the world. Although his tender age might have suggested a radical shift was on its way, in fact the last two and a half years has kept the system largely intact, with only modest change in evidence.

“If people hoped for a major shift after the death of Kim Jong-il, they have not gotten it. We have seen modifications and minor changes, but Kim Jong-un seems to have more or less followed the formula set by his father and his grandfather with a few twists here and there,” sums up Adam Catchart, professor at the University of Leeds and editor-in-chief of Sino-NK, a website specializing in North Korean issues.

Some of those minor changes have taken place in the economy. Although accurate numbers are hard to come by, Chen Xiaohe, an expert on North Korea from Renmin University in China, estimates that GDP has grown since 2011 at between 1.7 and 2 percent. “This is a small economic improvement, but if we compare it with his father Kim Jong-il, the economy is today more stable and there is some economic development,” he says.

On the streets of Pyongyang, the minor “adjustments” – North Korean politicians don’t like the word “reform” because they consider it too daring – are easy to spot. The last few years have seen a host of cranes and building activity.  The Ryugyong Hotel, which started construction in 1987 and wasn’t finished until 2011, now stands as a modern landmark in the capital. “Kim Jong-un has been spending a lot of money. They’ve been building a lot in Pyongyang and also along the border with China, where you’ll see new roads, some houses and new statues,” says Catchart, who has serious doubts about how long they can keep with the construction boom. 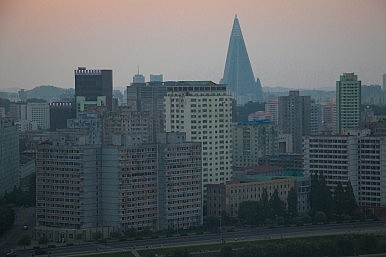 The economic growth has allowed for improved living conditions for most North Koreans, especially for those at the top. Kim Jong-un has gotten rid of his father’s austerity policy and Pyongyang has seen an increase in the number of privately run restaurants, luxury stores, and cellphones users. Four years ago it was difficult to spot a car in the North Korean capital, but today there are small traffic jams during rush hour.

The increasing wealth of some North Koreans is connected one way or another with the trade with China. Travelling to Pyongyang by train from Dandong, a Chinese city on the border of North Korea, one of the toilets of the wagon was out of use to make room for products coming from China – mostly ventilators, electronic devices, pots and pans, toilet paper, and beer. In the evenings, roughly twenty trucks an hour could be seen crossing the bridge that connects Dandong and Sinouju, on the North Korean side.

While the economy has seen some modest gains, there has been upheaval in ruling party politics, most notably the execution of Kim’s uncle Jang Song-thaek. His purge in December 2013, along with that of other officials in the army and the Party, is without doubt the most important political event in North Korea since Kim Jong-un took power. Most experts agree that it was a move by Kim to consolidate his power and eliminate any internal opposition.

Outside North Korea, Jang was widely regarded as the most experienced politician in dealing with the special economic zones (SEZs) along the border with China. Although not all of these projects have been cancelled and there has even been an increase in the number of SEZs, the purge of Jang seems to have sent a clear message that Kim Jong-un is not willing to follow the Chinese model established by Deng Xiaoping in the late 70s. “Presently North Korea has declared around 25 special economic zones, which on the surface sounds great and it’s a lot more than they had under Kim Jong-il, but only a handful of them are actually operating and have electricity or investors,” says Adam Catchart.

The SEZs are the perfect laboratory to evaluate how far Kim Jong-un will go with his economic adjustments, but the limits appear to be imposed by the nature of the regime. “North Korea is very keen on foreign investment, but unwilling to accept the political consequences of opening up the economy. For example, I don’t think the North Koreans are prepared to accept the reliance on an export economy that comes with the establishment of SEZs. The Juche concept of self-reliance is still a very strong aspect of their domestic ideology,” says Edward Schwarck, a research fellow in the Asia Studies Department of the Royal United Services Institute.

The purge of Jang Song-thaek has damaged North Korea’s relationship with China, the only country remotely close to an ally that Pyongyang had left in the international community. In recent decades, the uncle of Kim Jong-un had been an important interlocutor with Chinese authorities and had frequently visited the country. Chen Xiaohe calls him “a good friend of China.” With Jang’s execution, North Korea slammed shut one of it’s few remaining doors to the outside world.

The increasing distance and mistrust between Beijing and Pyongyang became clear when Chinese President Xi Jinping visited Seoul in July 2014. This made him the first leader of the People´s Republic of China to go to South Korea before visiting the North. Moreover, Kim Jong-un has not yet been to Beijing, and it seems nobody is waiting for him at Zhongnanhai. “In more than two years, Kim Jong-un has not yet been to China, and that’s a problem. Last year, when North Korea went ahead with the third nuclear test, the government didn´t listen to the Chinese warnings. So China is not happy,” says Chen Xiaohe.

In the military arena, Kim Jong-un has proved himself to be at least as hardline as his predecessors, and by and large there has been no improvement in relations with North Korea’s neighbors. In February 2013, the third nuclear test in the last seven years made clear to the international community that North Korea is not changing its military plans under the new president. “The nuclear program is very much going ahead. There is no question in my mind, and in most peoples minds, that the nuclear program is non-negotiable. A nuclear deterrence was now written in the state constitution, and they see it as absolutely essential to provide them with security from a potential attack from the U.S.,” says Schwarck.

The youthfulness of Kim Jong-un has proven to be more relevant, at least according to North Korean standards, in the promotion of a more modern and liberal society. Women, especially in Pyongyang, are wearing shorter skirts and higher high-heels, similar to those worn by North Korean girl-group Moranbong Band – and approved personally by the new president. At the bottom of Mansu Hill, where North Koreans start to queue up to pay tribute to Kim Il-sung and Kim Jong-il, today it is not difficult to find elegant women with short hair styles that wouldn’t be out of place in New York, London or Tokyo. 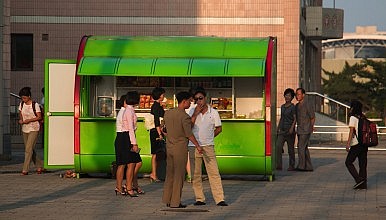 Kim Jong-un started this social transformation several months after he took power, when a performance broadcast on national television started showing Walt Disney characters and playing American songs like Frank Sinatra´s “My Way.” His wife, Ri Sol-ju, known for her taste in Dior handbags, is another example of the more cosmopolitan and modern look of the regime. “The first lady is a good example of trying to put a younger face on a system run by a lot of very conservative old men,” says Adam Catchart. 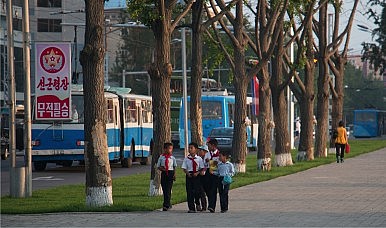 On the streets of Pyongyang there is some feeling of change, but nothing close to a rupture or collapse. The old buses continue to rumble along the big avenues, teachers attend school every morning on time, and officials don’t miss a day at work. On TV, North Korea remains a country proud of its communist purity and the fight against American imperialism. “I think Kim Jong-un believes the applause he gets. He seems to think that North Korea is a pretty great country, he is in charge, and things are going great,” says Adam Catchart.

Daniel Mendez is a multimedia journalist based in Beijing.

What if Pyongyang is using nuclearization as a means to alter the terms of its relationship with China?

North Korea has adopted creative new ways to export coal and other commodities to fund its WMD and ballistic missile program.

Opposition Leader Lee Jae-myung at the Center of Criminal Probes

In an unprecedented move, the leader of South Korea’s main opposition party has been summoned for questioning.