Benedict J. Tria Kerkvliet on Speaking Out in Vietnam

What Does the China-India Standoff in Ladakh Mean for Pakistan?

There are ghosts on the National Mall in Washington D.C.

Or, at least, that’s the way the Segway tour guides describe the beautiful and haunting Korean War Veterans Memorial. Last week, for the first time in my posting here, I went to see the memorial at night. The 19 silent figures are lit from below, giving them a spectral appearance. And they are reflected in the polished black granite wall behind them, suggesting a squad of 38 soldiers. This signifies the 38th Parallel, the original border between North and South Korea (I stood there earlier this year when I visited the DPRK). It was a moving experience.

On December 3, the United Kingdom – the second-largest troop contributor of the 21 allied combatant countries in the Korean War – unveiled its own permanent memorial to the 81,084 British servicemen and women who deployed to Korea between 1950 and 1953. The Duke of Gloucester, representing HM The Queen, and the Republic of Korea’s Minister of Foreign Affairs Yun Byung-se, led a ceremony on the banks of the River Thames in central London. It was attended by British Defence Secretary Michael Fallon; Foreign & Commonwealth Office Minister of State Hugo Swire; Republic of Korea’s Ambassador to the Court of St. James, H.E. Sungnam Lim; and 320 British veterans of the Korean War. 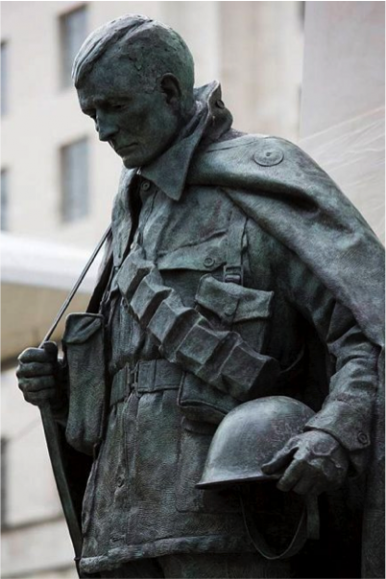 Thanking the government of the Republic of Korea for donating the memorial, Defence Secretary Fallon said that we must never allow the notion of a “forgotten war” to take hold, and that we would never forget the sacrifices made by our soldiers. Foreign & Commonwealth Office Minister of State Hugo Swire, reflecting on the “profound friendship” forged in war between the UK and the Republic of Korea, announced the first ministerial U.K.-ROK Strategic Dialogue, hosted by Foreign Secretary Philip Hammond.

As we reflect on the sacrifices made by women and men from around the world, participating in the UN’s defense of the Korean Peninsula more than 60 years ago, it seems appropriate to survey what we are doing today to ensure peace, stability and human rights in one of the world’s most heavily militarized areas.

Together with the other countries which sent troops to fight in the Korean War, the U.K. continues to support the United Nations Command in Seoul, monitoring developments on the Peninsula and ensuring readiness in case of increased tensions. The Korean War, we must remember, never formally concluded, coming to a halt only with an Armistice on July 28, 1953.

Though not a member of the Six-Party Talks process, which seeks the freezing, reversing and dismantling of the DPRK’s nuclear program, the U.K. shares America’s concern at Pyongyang’s continued efforts to develop nuclear weapons. Along with our European partners, we enforce a range of UN and other sanctions to slow its progress. Meanwhile, we use our diplomatic contact with the North Korean government to urge restraint, and to convey the concerns, ideas and values of the outside world, from which many officials in Pyongyang would otherwise be isolated.

And our small diplomatic presence on the ground in the DPRK affords us a perspective which several Six Party Talks participants, including the U.S., do not have. I hosted a group of British colleagues here in Washington recently, who visits annually to discuss their observations and analysis of the situation on the Korean Peninsula with a range of U.S. officials and academics.

And we are proud to be among those nations most actively engaged in responding to the damning conclusions of the UN’s Commission of Inquiry into human rights in the DPRK. The report, led by Australian judge Justice Michael Kirby, found evidence of a range of egregious, systematic abuses of the North Korean people by their government. Two of its recommendations were referral of the issue to the Security Council and to the International Criminal Court. A recent European Union- and Japan-led resolution at the United Nations General Assembly encourages the UN Security Council to consider these steps.

So next time you are on the National Mall in Washington, D.C., or on the Victoria Embankment in London, I would encourage you to pay a visit to the Korean War Memorial. Consider, while you are there, that there is far more hard work to be done for Korea. It is being done by those of all nationalities working for lasting peace on the Korean Peninsula. It is being done by diplomats and government officials in Pyongyang, Seoul, Washington, New York, London and elsewhere, working hard to find solutions to the ongoing challenges which are the sixty-year legacy of that awful war. And it is being done by the dedicated human rights activists, NGOs and charities’ trying to shed light on what remains the most opaque place on earth.

And of course, let those ghosts remind us of the veterans’ sacrifices, made in the defense of freedom on the other side of the world more than sixty years ago.

The Problem With Travel in Southeast Asia and COVID-19

A Carnival on the City’s Margins: The Sonepur Mela of Bihar

Vietnam’s success in containing COVID-19 provides a chance to to use earned legitimacy as a springboard to reforms.

A proposed Korean War memorial in Delhi will recall India’s role, which ranged from high politics to individual stories.

Thinking the Unthinkable: Central Europe at War With North Korea

By Tomáš A. Nagy

The “soft” and “light” military capabilities of Central European armies could come in handy if war erupts on the Peninsula.

Why Trump Should Beware the North Korea Double Freeze Deal

The administration must keep in mind limitations of a proposal that has been gaining momentum.

China must square up to its responsibility in the North Korea nuclear crisis.

Detective work is at the heart of efforts to fight the pandemic. Will it be enough?

The scope and level of North Korea’s next move will be determined by the extent and type of the benefits it expects.

China to the Rescue in Turkey?

As Turkey battles debt and a currency crisis, can Chinese investment save the day? Or will it just create more problems?

A Magnitsky Act would allow the effective targeting of individual human rights abusers without the collateral damage of sweeping sanctions.

The implications of the new law for Hong Kongers and the world.