Within minutes of news breaking that police had violently broken up a peaceful student protest in downtown Yangon earlier this month, Salai Suanpi set to work. The cartoonist, who by day is employed by non-profits but spends his nights poking fun at the powerful with biting illustrations, drew a typically irreverent sketch and uploaded it to social media. Dozens of his colleagues did the same. 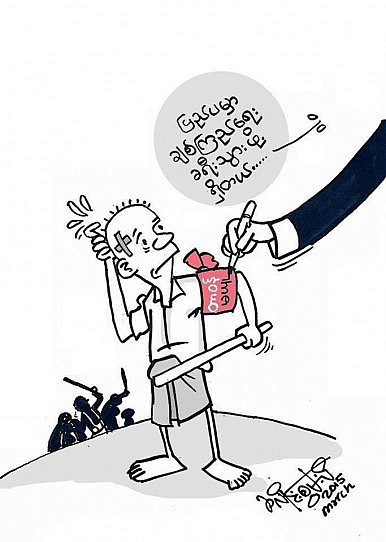 The images, depicting the thugs who were employed to disperse education reform demonstrators, were shared thousands of times. Some painted the thugs, a loathed civilian branch of police known as Swan Ar Shin who wore red armbands emblazoned with the word “duty,” as an ugly threat to democratic transition. The following morning, more were splashed across the newsstands. It was a powerful statement in a country in which, until three years ago, independent media did not exist.

Since the abolition of censorship in 2012, shortly after military rule gave over to a quasi-civilian government, cartoonists in Myanmar have enjoyed new freedoms. It’s not a way to make a living – journals and newspapers typically pay just $10 per image – so most of the cartoonists have other jobs. But, published under pen names like “Loudspeaker” and “The Greatness,” their stinging pictures have won them thousands of fans.

“People have so many feelings that they didn’t have an outlet for during the past four decades under the junta,” said Myint Kyaw, the secretary general of the Myanmar Journalists Network (MJN). “The cartoonists understand these feelings, and people applaud them.”

Cartoonists, who have been publishing in Myanmar since the 1930s, have escaped some of the scrutiny applied to other media professionals. Surprisingly, for an occupation that skewers authority in a deeply paranoid and, for generations, wholly authoritarian state, there have been no defamation cases brought against them in recent years, according to the MJN. And with the proliferation of daily newspapers in the country and the advent of social media, they now have more platforms than ever on which to disburse their pictorial commentary. Facebook pages like Brainwave collate and share the cartoons to tens of thousands of followers.

Salai Suanpi, a diminutive, high-spirited 27-year-old who wears rectangular glasses, a small goatee and a stud in his left ear, is one of the best-known of the younger generation. He sells images to local media but focuses most of his attention online. “I use a lot of my energy on social media,” he said. “They say we are in the global village now, right? This way, my cartoons will be seen around the world.”

But as cartoonists explore their post-censorship boundaries, enthusiasm has been dampened by fear. In the past year, more than 10 journalists have been jailed. Last October, a freelance reporter was shot dead in the custody of the Burmese army. In February, a photojournalist was arrested after posting a satirical image of a military battle on Facebook. He was later released but the episode left many unsettled. Cartoonists routinely practice self-censorship.

“I don’t believe in media freedom 100 percent now, so I create my cartoons very carefully,” said Kyaw Thu Rein, a 30-year-old who contributes to local publications like The Irrawaddy. “I take care to create cartoons not to anger the government, just to make them know what is happening in real life.” 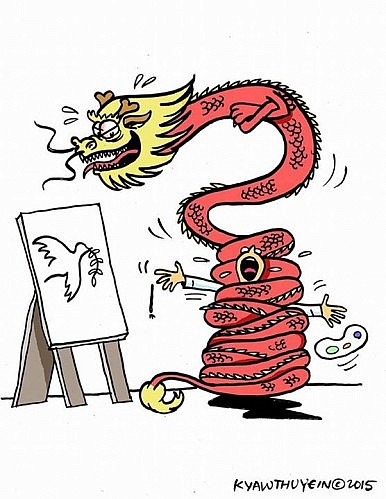 Some issues – namely religion – are simply off-limits. “It is not possible to draw Charlie Hebdo cartoons in our country,” said Kyaw Thu Rein, whose online portfolio features illustrations expressing sympathy with the Paris-based magazine that was the victim of an Islamist terror attack in January. Religious tensions in Myanmar have escalated in recent years as an extreme strain of Buddhist nationalism has gained followers. This week, a New Zealand bar manager and two Burmese colleagues were sentenced to two and a half years in prison for posting an image of the Buddha wearing headphones on Facebook.

When Yangon-based cartoonists get together in teashops and beer halls, they swap stories that include disturbing episodes of intimidation. In 2013, Salai Suanpi drew a cartoon for a Burmese-language journal that showed up the military. In response, he got an email threatening him with jail time. “They are always watching our cartoonists,” he said, referring to the authorities. “If you write down text, a lot of people won’t read it. But if you do cartoons they see it…They say there is freedom, but still this kind of thing is happening to a lot of cartoonists in Myanmar.”

It’s a familiar scenario for Aw Pi Kyeh, 56, one of the country’s most beloved cartoonists. Throughout his career, which began in the 1970s, he has had more than 300 cartoons banned. Most of the time, government lackeys simply ripped the pages out. “If they understand, they censor; if they don’t understand, they censor,” he said, with a toothy chuckle. “The other cartoonist, on the back of my cartoon, he is unlucky.”

When he talks about how the rules have changed since pre-publication censorship was abandoned, Aw Pi Kyeh likes to use football metaphors. Before the end of censorship, Aw Pi Kyeh said, “we need to use a corner kick – we kick and the audience must think, using their head, to shoot to the goal,” he said, in an interview at his Yangon home. “Now, we can kick penalties. But they have the red card. And we are afraid of that.”

The younger generation are far more prolific, though less skilled, than their old masters, in Aw Pi Kyeh’s view. “When we were young we had no space, because the older famous cartoonists got all the pages. But now there is more space than cartoonists so they draw a lot,” he said. “The quantity will change to the quality over the next two or three years.”

Nonetheless, after the recent response to student protest violence, Aw Pi Kyeh was impressed. “The [written] journalism came quite late, but when the cartoonists saw the news they started drawing and, five or ten minutes later, the images popped up on Facebook,” he said. “I thought, ‘they are very good people, they are dutiful.’”

Salai Suanpi taken up the mantle in a fluctuating environment. He doesn’t know where the limits lie. “Maybe the cartoonists are clever, or maybe the government doesn’t want to arrest them,” he said. “But I don’t know what will happen tomorrow – it can change, day and night.” And so, day and night, Salai Suanpi, who says he does his best work in the hours between 11 p.m. and 5 a.m., will work to keep up. “I am lucky, because the time is changing, and I have to catch it.”

Poppy McPherson is a freelance journalist in Southeast Asia.

Photojournalist Killed in Custody in Myanmar Amid Press Crackdown

Reporters Without Borders estimates that 53 journalists remain in the military's custody.

The Military Junta Has Driven Myanmar’s Journalists Back Underground

While deploying violence in the streets, the generals have been unrelenting in their attacks on the country's journalists.