This article is part of an ongoing series surveying archeological and historical sites across Asia. For the introduction to this series, please see here.

As mentioned in the introductory article to this series, one of the biggest problems facing many historical sites in Asia is a lack of funding and interest. However, there are also exceptions to this. One such exception: sites from the prestigious Indus Valley Civilization (IVC), which generates enormous interest in South Asia. The oldest archaeologically attested civilization in South Asia, roughly on par chronologically with ancient Egypt and Sumer, the IVC is considered the fount of ancient Indian civilization and its heritage is claimed by both Pakistan (where many IVC sites are now located) and India.

The IVC was discovered in the early 20th century by the Archeological Survey of India, then run by the British. At that time, the two largest IVC sites were Harappa and Mohenjo-Daro; the IVC is also sometimes known as the Harappan Civilization. Since then, subsequent discoveries have upended assumptions about the IVC’s chronology, geographical range, linguistic characteristics, and demise. Initially, the IVC was assumed to have lasted at most about a thousand years, with a mature period dating from around 2600 B.C.E. to 1900 B.C.E. Furthermore, the range of the civilization has steadily expanded with new discoveries. While nearly all scholars agree that urban civilization in South Asia began in the northwest of the subcontinent (modern Pakistan and parts of northwest India), the IVC seems to have extended further west, south, and east than initially suspected, as far as the Indian states of Maharashtra and Uttar Pradesh and the Pakistani border with Iran. This definitely makes the IVC larger in area than other ancient civilizations. However, nothing is certain about its political organization and it was probably comprised of independent cities rather than states or empires.

These discoveries call into question whether the civilization’s nexus was in fact in the central Indus valley of modern Pakistan, which may have merely been better preserved due to the dry climate of that region. Rakhigarhi, in Haryana, India, has been determined just this week to be the largest–ever IVC site. This has led to speculation that the IVC reached its mature phase farther east than previously thought.

Nonetheless, sites like Mohenjo-Daro in Pakistan are among the most extensively excavated and are fairly large. Mohenjo-Daro features some of the earliest water management and sewage systems ever found in the world.

Another question raised by these discoveries regards the fate of the civilization. It is unlikely that such a large and long-lived civilization simply collapsed, as previously thought. Rather it seems to have evolved into a more agriculturally oriented civilization, away from a mercantile urban civilization, as is spread eastwards into India. At some point during this process, it was assimilated into the expanding Vedic culture, which according to archaeologists started around 1700 B.C.E. in northwest South Asia, and also spread east. 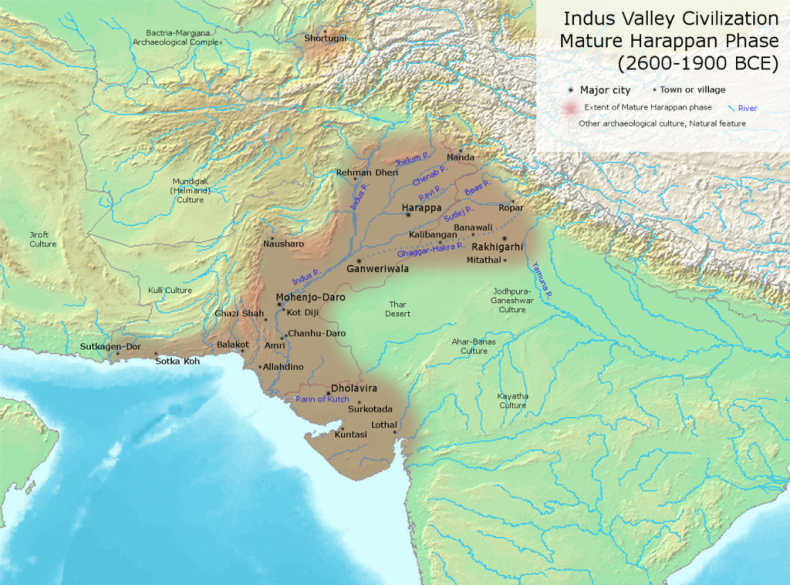 New discoveries in the Indian state of Haryana, underscore many of these trends. Bhirrana is now considered the oldest discovered IVC site, with some of the oldest mounds dating back to 7500 B.C.E. Previously, Mehrgarh, in the Pakistani province of Baluchistan, dating from around 7000 B.C.E. was considered the oldest IVC site. Of course, it is debatable where the arbitrary distinction between ancient agricultural sites and civilization lies. Traditionally the advent of writing has been key in making that distinction, but if we use a different qualifier, civilization in the sense of urban sites could well extend back almost ten thousand years, and not just in South Asia. Some sites in the Middle East, like Jericho, date back to almost 9,500 B.C.E. What is clear is that the chronology of human civilization is being pushed back.

Some of the most interesting IVC sites are from the coastal Indian state of Gujarat and include Dholavira and Lothal. Lothal is home to the world’s earliest known dock and saw trade between the IVC and Mesopotamia, a fact known through Sumerian records. Many sites in Gujarat have been thoroughly excavated and explored by the Indian Archaeological Survey, which wanted to further explore the IVC after many of the previously more famous sites ended up in Pakistan after the partition of British India.

One of the greatest mysteries in archaeology, however, is still in need of further exploration — the Indus Valley Script has yet to be deciphered, and all attempts at doing so have proved elusive. Till then, speculation about the language of the Indus Valley people remains just that: speculation, though theories abound. Whenever the script is cracked, it will go down in history as one of the most important archaeological discoveries ever.

Revealed: The Truth Behind the Indus Valley Civilization’s 'Collapse'

New evidence offers unique insight into the collapse of the Indus Valley Civilization.

South Asia or India: An Old Debate Resurfaces in California

Should the subcontinent be referred to South Asia or India, especially in the historical sense?

A Brief History of Balochistan

How did the Baloch nation come to be?

When it comes to India-Pakistan dialogue, what comes first: Fixing the overarching bilateral relationship or discussing Kashmir?