Last week, The Diplomat featured an interesting piece about the border between Turkmenistan and Afghanistan, noting that the Amu Darya, the river that forms a part of the border between the two countries, has been “steadily pushing southward,” leading to confusion and border disputes. This brings to mind the history of Afghanistan’s northern border, much of which was steadily pushed southward in the 19th century by the Russian Empire, and lies within today’s Turkmenistan.

In fact, this week — March 30 to be exact — marks the 130th anniversary of the infamous Panjdeh Incident, when the Russian Empire seized the then-northwestern corner of Afghanistan in 1885. If one observes a map of the northern border of Iran and Afghanistan with the countries of Central Asia, it is evident that it fairly evenly follows a straight west-east gradient from the Caspian Sea to China, except for an area where southwest Turkmenistan seems to plunge into Afghanistan. The western Afghan city of Herat is relatively close to the border with Turkmenistan today, but used to have a larger northern heartland. To see what Afghanistan looked like before 1885, observe this map and compare it to a modern map: 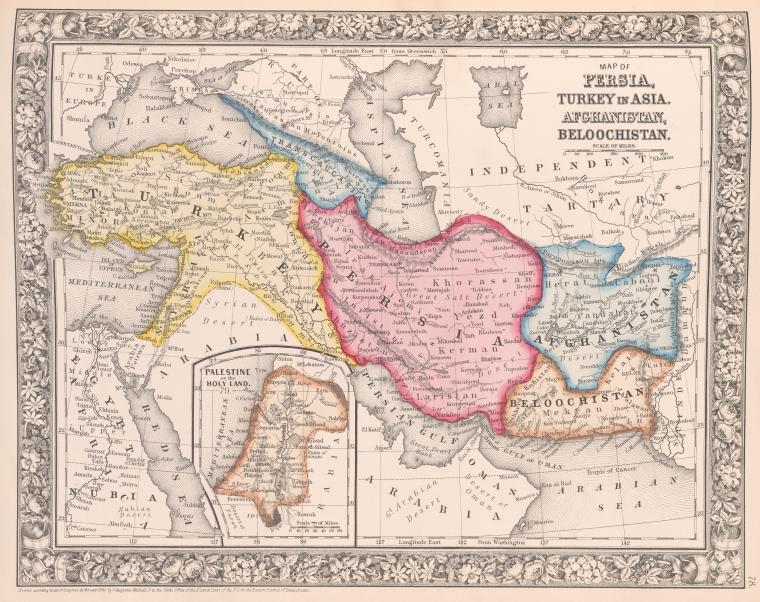 Afghanistan’s borders fluctuated greatly throughout the course of the 19th century, mostly due to the machinations of the British and Russians during their “Great Game” to dominate inner Asia. Modern Afghanistan was founded as a conquest empire in 1747 on the backs of the collapsing Persian and Mughal empires by one Ahmad Shah Durrani, an Afghan (then synonymous with Pashtun). By the end of the 19th century, however, Afghanistan was mostly a buffer state between British India and the Russian Empire, with weak administrative control over much of its territory.

Afghanistan began to weaken in the early 19th century when the Punjab region in the eastern part of its empire broke off and formed the Sikh Empire. The Sikh Empire then seized Peshawar, the winter capital of Afghanistan in 1818 (all Sikh territory was annexed by the British in 1849). The British attempted to intervene in Afghanistan several times during the course of the 19th century, sometimes to the benefit of that country and sometimes to its detriment, but always because they feared the growth of Russian power in the direction of their empire in India.

While the disastrous invasion of Afghanistan from 1839-1842  is well known (and is the subject of an excellent study, Return of a King: The Battle for Afghanistan, 1839-42 by William Dalrymple), Britain also succeeded in hiving off much of eastern Afghanistan through the establishment of the Durand Line in 1893. Britain also enabled Afghanistan to stretch further west than its administrative capabilities could handle by preserving its de jure control over the western city of Herat, which really functioned as a de facto independent principality for much of the nineteenth century. Herat had been the most important eastern Persian city for many centuries before Afghanistan seized it. Persia tried several times to regain Herat in the 19th century, only to be thwarted by British action again (1838) and again (1856).

It was in this loosely controlled northwestern corner of Afghanistan that Russian encroachment on Afghanistan’s northern border began. North of Afghanistan lay three Turkic-controlled Central Asian khanates: Khiva, Bukhara, and Kokand. While their raids annoyed their northern neighbor Russia for many years, Russia decided to conquer them once and for all to compensate for its loss in the Crimean War and regain its pride. The three Central Asian khanates fell in due course in the 1860s and 1870s. The conquest of Central Asia also brought Russia closer to British India and, as a bonus, to a warm water port, the ultimate dream of the Russian Empire.

After the Second Anglo-Afghan War (1878-1880), the British installed a sympathetic ruler on the Afghan throne, fearing Russia’s southward expansion, which reached the northern border of Afghanistan after the conquest of Merv (now in Turkmenistan) in 1884. The British demanded that the Russians halt any further southern advance and both the Russians and British agreed to a delineation committee for determining the border between Afghanistan and Russia. However, before the committee could meet (the Russian commission was conveniently delayed), Russian forces decided to push their advantage to the last extent possible by attacking an Afghan garrison on the west bank of the Kushk River on March 30, 1885. Over 600 Afghan soldiers were killed and the Russians seized the Panjdeh oasis south of the river. These lands were south of the traditional borders of Afghanistan and the entire region’s traditional boundary with Central Asia.

The British were alarmed and there was talk of war, but a final boundary agreement was hammered out and the Russians were allowed to keep Panjdeh after promising to stop any further encroachment on Afghanistan. Later on, in 1895, Afghanistan was compensated with some new territory on its eastern frontier, including Wakhan, the strip of land that connects the rest of Afghanistan to the Chinese border, preventing the British and Russian Empires from actually touching. Afghanistan did not want Wakhan but accepted it as a “gift” arranged by the British Empire.

Therefore, if you have ever been left wondering about the origins of Afghanistan’s strange borders, they are mostly a product of British and Russian imperial vagaries, leftover from their Great Game. The Panjdeh Incident epitomizes the extent to which British and Russian interests shaped contemporary borders.

Turkmenistan says it is COVID-19 free, but the virus, analysts say, is impacting the country whether Ashgabat admits its presence or not.