For her latest project, it was imperative that Kathy MacLeod spent plenty of time in Bangkok’s seediest bars, taking reference photos of the sleaziest patrons of the carnivalesque red light district, Soi Cowboy. MacLeod, an illustrator born and raised in the city, was working on Build Your Own Bangkok, a vast cartoon tapestry styled after Where’s Wally (known in the United States and Canada as Where’s Waldo), featuring portraits of the city’s many colourful archetypal characters. She recently exhibited the work at WTF Gallery in Thonglor.

Poppy McPherson spoke to her about Bangkok’s ‘vibe of self-worship’, the hipster invasion, and her obsession with sexpat culture.

Hi Kathy. The style of your work is deliberately cutesy, almost naïve. But some of the cartoons are quite sad. Was that deliberate?

I feel like I can get away with drawing a sad or creepy situation if on first glance it’s funny and cute. It’s interesting to consider why some people come to Bangkok, what they’re looking for, and what happens on their quest to find it: if they get it and still aren’t satisfied, or if they are satisfied and then end up totally losing themselves in it. 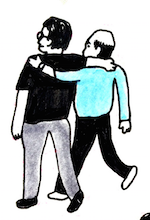 “Two men walking arm in arm, just having a great time and enjoying being there with each other. True comraderie!” from Soi Cowboy 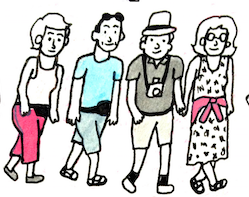 Were there any characters that you were particularly attached to?

I liked the people on Soi Cowboy the most. I’m kind of obsessed with sexpat culture. I read sexpat blogs and forums from time to time and watch the many YouTube channels that are out there. Even if they’re super creepy, there tends to be something childlike about them in their search for pleasure. It was fun for me to draw them in a way that was cute and almost innocent. Soi Cowboy is also an interesting place because it’s not actually that intimidating – it’s almost like Disneyland. There are a lot of people who go there just to have a drink and gawk at the whole scene, who aren’t actually part of the “lifestyle”. I know I depicted it as a playground, and do see it as one, and I have a lot of complicated feelings about it, but I think I’m more fascinated by it than frustrated. I just want to know what it feels like to have that option available to you at all times – to feel lonely and then make yourself not be lonely any more.

As an observer of the city, how do you think Bangkok has changed in recent years?

An American hipster aesthetic has really spread through Bangkok like wildfire – Kinfolk magazine, minimalist-industrial decor, fixed gear bikes and potted plants – to the point where tons of new bars and cafes are opening, but they all have the same look. Lots of food trucks and farmer’s markets now. I remember the first time a hip, locally-sourced, farm-to-table type of place opened in Bangkok like five years ago. My friend was really excited about the fact that they served quinoa. Now you’ll never feel a lack of quinoa in your life.

This is a pretty clichéd complaint at this point and it’s not like I’m immune to it, but the endless development of giant malls and condos is really depressing to me, especially when amazing decades-old establishments like the Rex Hotel are torn down because of it.

And mobile technology has gotten to this point where if my 12-year-old self could see it, she would find it terrifying and disturbing. I think Bangkokians have always placed a lot of value on surface image and the rise of social media has fed into that. Places become popular if they have things or walls to take selfies in front of, or if they serve things that are photogenic. There’s just this pervasive vibe of self-worship and image-worship that’s hard to ignore in Bangkok nowadays. 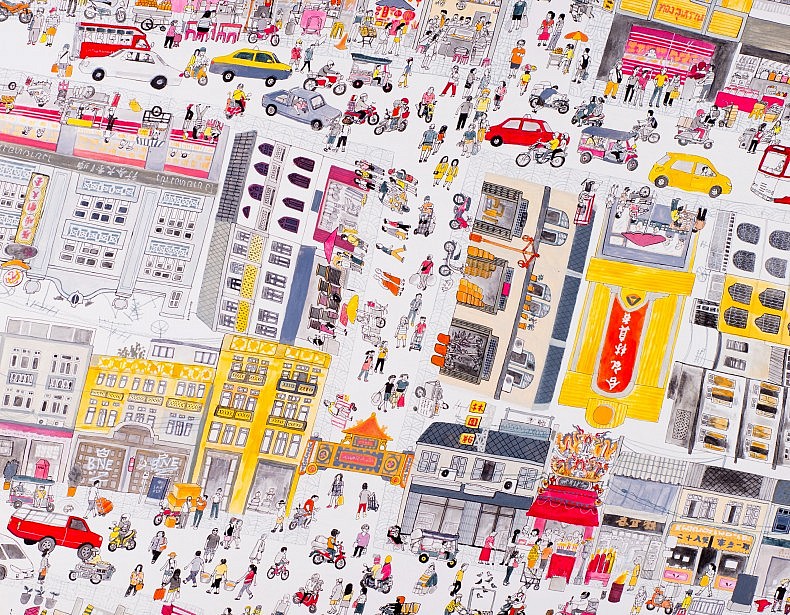 How have the people changed?

In the past few years I’ve noticed more hipsters and creative types who aren’t here to experience the sex trade or the spiritual side (or whatever it is that backpackers are looking for here) but rather the art scene and whatever is “cool” about Bangkok. The “coolness” has definitely increased here, whatever that means. More stuff geared towards hipsters, the aesthetic that people here like to link to Brooklyn. I think that maybe before it was an exotic and mysterious place, and now it’s more just cool like all the other cool places (with more exotic offerings).

All images in this piece were used with the permission of Kathy MacLeod.

The Sleuth on the Sukhumvit: 25 Years of Noir Fiction With Christopher G. Moore

Bangkok may be World Book Capital for 2013, but support for independent bookstores and publishers lags.

Bangkok has supplanted London as the world’s hottest destination, with a little help from the movies.

Prime Minister Kishida's emphasis on unity with NATO over Russia paid off with recognition of China as a challenge to NATO's interests and security.