Many bankers and economists have been looking at shadow banking in China. But what happens when debtors fail to pay their debts or challenge the lending arrangements?  When parties to shadow lending end up in dispute resolution, it raises unique issues for the institutions that hear those cases.

Government recognition of internet lending and peer-to-peer (P2P) lending, now at an early stage, likely means that many more shadow lending disputes are destined for the already stressed court system.

What are shadow banking disputes?

In China, shadow lending is most often called 民间借贷 or 民间贷款 (literally, private lending), and involves lending outside the formal banking system. One of the vice presidents of the Supreme People’s Court commented that this is not a legal term, and regulators and judicial authorities have different views of it.

Regulators consider loans made by persons or entities other than commercial banks to be “private lending,” even if they are made by microfinance companies and pawnshops, which have approval to make loans. A former China Banking Regulatory Commission official contacted in connection with this article commented that regulators want to stay far away from the messy complexities of private lending. Because debtors often default on these loans, the courts have become the regulator of last resort. 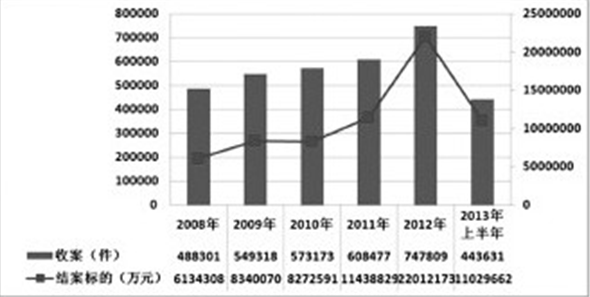 The bars represent the number of private lending cases per year; the line represents the monetary amounts involved.

The chart to the left, compiled by the SPC, graphs the numbers of private lending cases, excluding those between companies (because it has considered them illegal), from 2008 through the first half of 2013, and total amounts in dispute.

A comparison of the number of private lending cases in 2014 for four Chinese provinces, based on local court data.

A report by a Qingdao city court published at the end of last year noted that private lending cases accounted for about half of commercial cases and the amounts of disputes and complexity were escalating.

Data from Sichuan, contained in the two graphs below (both from People’s Court Newspaper, 人民法院报), show that both the number of private lending disputes and the amount of money involved have increased dramatically since 2008. 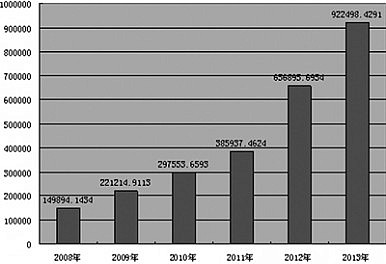 Total amount of money (in RMB) in dispute for Sichuan’s private lending cases, 2008-2013

Legislation on private lending is another headache for courts hearing private lending cases. The legislation has to be pieced together from multiple sources, because regulations on loans are only applicable to financial institutions. Moreover, the SPC’s policies on private lending have shifted. The SPC was originally hostile toward loan contracts between companies (upholding PBOC regulations on the subject), but more recently has started to change its position in the last two years, as the government has started to recognize P2P lending and internet lending.

In the areas of China where the private sector is strongest, there have been the most private lending disputes. To provide some certainty to local judges (and any of the local companies with legal counsel), those local courts (usually at a provincial level, such as Zhejiang, Jiangsu, but also Shenzhen) have issued lengthy guidance on and reports concerning these disputes. Still, the provincial courts are looking to the government and the SPC to provide more comprehensive guidance.

Private lending cases are fraught with legal issues for the judges trying to deal with these disputes.

The number one problem: finding the debtor. In China, the courts serve by process, but in many private lending cases, the defendant has disappeared, leaving the court to serve by notice. According to statistics from a Qingdao court, only about 20 percent of cases could be served directly. If the debtor is nowhere to be seen, settlement or mediation, which Chinese judges prefer as the best way to dispose of cases, is impossible.

Further complicating things, many private lending cases are based on IOUs or other sketchy evidence, or the loan was made in cash rather than by a bank transfer.

Once a case is decided, it’s hard to find assets with which to satisfy the judgment. In addition to the problem of absent debtors, there are many problems with the security for these loans. Very often, the mortgage or other security has not been registered, or the guarantor hasn’t provided contact details or is simply fraudulent.

There’s another level of complexity to many of these cases as well. Private lending has become a business, with many SMEs, micro-credit companies, investment companies, guarantee companies, and chains of companies (as described in this recent King & Wood Mallesons client alert), involved, along with increasing amounts of money. Many listed companies are establishing microfinance companies so that they can earn the maximum legal interest that the courts will uphold (which is four times the bank rate) rather than engage in their traditional business. But the legislation and guidance does not given anyone certainty.

A big concern for the courts is private lending disputes as evidence of criminal activity. Some loans are used as a cover for gambling debts or transactions in the illegal drugs trade or prostitution. Many private loans exceed usury limits. Judges need to puzzle out whether the lender is engaging in “illegal fundraising” (described here), which can result in criminal liability.

As has been written about elsewhere, the soft economy means that many private companies (which provide much of the employment in China) are looking to shadow or private loans to keep themselves afloat. In December, 2014, the SPC came out with a policy document with positive language about private lending. The head of the No. 2 Civil Division said that “we shall take a permissive attitude toward these guarantee or innovative [lending] practices. By hearing these cases, the financing difficulties of entities of non-public sectors of the economy might be improved or solved.”

The lower courts (and parties to private lending arrangements) are looking for more legal certainty rather than a mere “permissive attitude.” Under reforms implemented this spring, lawsuits are now easier to file. If P2P and internet lending cases are headed for the courts as well, the flood of cases and the chaotic state of the law, combined with the forthcoming lifetime responsibility system for mistaken cases, may lead even more judges to leave the bench.

Private Lending in China: Out of the Shadows?

Will China Learn From Its Biggest COVID-19 Mistake?

Amid the Shanghai lockdown, government efforts to silence and prosecute critics have received more public attention – and sparked increasing outrage.

Taiwanese Morrison Lee Remains Detained in China, Even After Finishing His Jail Term

The case of Lee, who was detained after taking part in the Hong Kong protests in 2019, sparked concerns about new legal precedent.

By Jerome A. Cohen

Extradition from Western democracies to China is unpalatable, legally and morally. So what alternatives exist to see justice done?