His back to us, the People’s Liberation Army (PLA) soldier is seen running towards a building that bears a striking resemblance to the Japanese-built Presidential Office in Taipei. Following a collage of tanks and artillery firing rounds of ammunition, the scene switches back to infantry, which is seen approaching and eventually entering what is, presumably, the same building.

According to reports in Chinese media, those scenes, featured in a three-minute video clip aired on state-run CCTV on July 5, come from Series C of this year’s live-fire Stride 2015 Zhurihe (跨越-2015·朱日和C) military exercises, which commenced at the Zhurihe Training Base in Inner Mongolia last month. 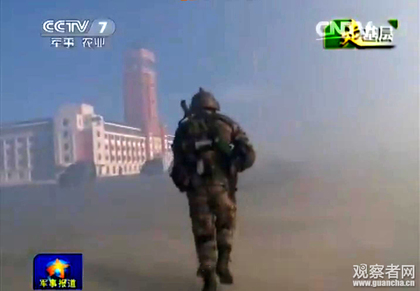 Screenshot from the CCTV broadcast (via 观察者)

Unnamed military experts cited in the reports inform us that the five-story structure, which is ostensibly computer generated, is of about the same height as the Presidential Office in Taipei, which has led to speculation that the object of this years Zhurihe’s exercise is to develop the skills necessary to resolve the “Taiwan issue” by force. The PLA Daily reported on July 21 that the exercises aimed to practice “winning a battle to gain control of major urban stronghold.” Citing PLA brigade head Ding Chao (丁超), the PLA Daily reported that the C exercise simulated urban combat sites copied from real city environments.

Although the reports have understandably sparked some concern in Taiwan, the release of the footage should be taken in its proper context. Above all, given the sensitivity of the matter, and since it was aired on the CCTV 4, it is almost certain that the decision to air the segment, and to do so now, required the approval of senior officials in the Chinese Communist Party (CCP). Although not everything that appears on CCTV or Xinhua is necessarily controlled and approved by CCP officials, something as controversial as a simulated assault on the seat of government in Taipei certainly falls in the category of material that does necessitate a green light from above.

Therefore, we should pay close attention to the propaganda value of the segment, which aired at a time when Beijing’s favorite counterpart in Taipei, the Chinese Nationalist Party (KMT), looks likely to be defeated in the January 16, 2016, presidential and legislative elections. As it has done before in the past, Beijing is sending a signal to voters in Taiwan to make the “right” choice (vote for its favored candidate, Hung Hsiu-chu of the KMT) and warning of the consequences should they fail to comply (by voting for the opposition Democratic Progressive Party’s Tsai Ing-wen). Only this time, rather than bracket Taiwan with live missiles as it did in 1995-96—which backfired and forced the Taiwanese to rally ’round the flag—Beijing is using simulated combat in an environment that is intimately known to the Taiwanese: downtown Taipei, which is much less abstract than bodies of water off Kaohsiung and Keelung. Look, the video says, we have become so powerful that we can take the battle to the street level.

Consequently, rather than treat the video as portraying a serious drill in which PLA soldiers are practicing urban warfare in a Taiwan context, it should instead be regarded as an exercise in political warfare, something that the CCP is rather adept at. We should always keep in mind that China would much prefer to defeat Taiwan without having to resort to force, especially if this risks a U.S. intervention. The political warfare component of its strategy is therefore at least as important as is the PLA’s ability to fight.

Furthermore, recent research into PLA literature suggests that the Chinese military remains very concerned over whether it could launch military operations against Taiwan and succeed. Never mind what angry Chinese generals argue in their op-eds: Despite the balance of force having undeniably shifted in Beijing’s favor in recent years, an amphibious assault against the island—which would be necessary to put boots on the ground and to equip PLA soldiers with the heavy equipment they’d need to implement an occupation—remains an extraordinary challenge, one that would impose heavy material costs on Beijing, not to mention the serious harm done to its reputation internationally. In other words, the most onerous part of an assault on Taiwan—crossing the Taiwan Strait and storming beaches that are particularly inhospitable to an amphibious assault—appears to have been skipped in the exercise.

Thus, if the footage from Stride 2015/C is, as it seems to suggest, a simulation of an assault on Taiwan’s Presidential Office, it should be assessed from the perspective of what the PLA can realistically hope to achieve. While urban warfare is likely part of PLA training programs, reaching the point in a Taiwan scenario where PLA soldiers are crossing Ketagalan Boulevard and storming the Presidential Office is rather far-fetched. Much more likely is the possibility that the segment was aired when it did in order to sow fear among Taiwanese voters and help Beijing’s “ally” in the polls.

The author is an employee of the Thinking Taiwan Foundation, a think tank launched by Tsai Ing-wen in 2012. The views expressed in this article are the author’s alone and do not necessarily reflect the official positions of the institutions with which he is affiliated.

The Chinese aircraft encircled Taiwan and returned to China through the Miyako Strait.

Many analysts have focused on the potential political calculations behind the meeting between Xi Jinping and Ma Ying-jeou. Time to look at the bigger picture.

Beijing’s Games in the Taiwan Strait

The Great Chinese Lie About Taiwan

Taiwan wants many things. War isn't on that list.