Recent satellite imagery of Fiery Cross in the Spratly Islands reveals that China’s construction of facilities on the reef is more ambitious than previously appreciated, with one of its building complexes on track to rival the Pentagon in size. The complex, located in the midsection of the manufactured island a thousand kilometers off China’s coast, has a current footprint of approximately 61,000 square meters, not including large adjacent tracts where additional foundations are being laid. As a benchmark, the Pentagon has a footprint of 116,000 square meters, not including its interior courtyard. 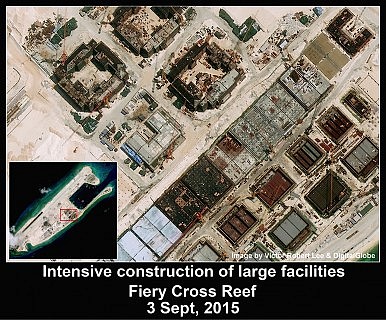 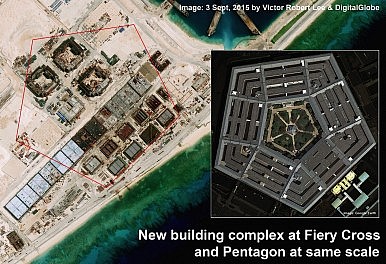 Increasingly sophisticated installations have appeared on Fiery Cross since an image was taken on July 13, including a circular antenna array and a likely radar tower rising from what was a bare sector of sand two months ago. Construction of the new military base at Fiery Cross appears to have suffered some setbacks and changes to plans, however. 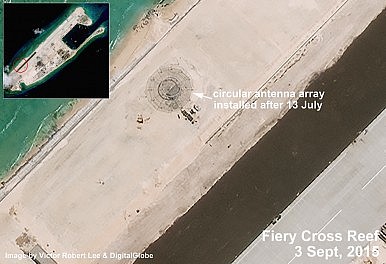 The primary runway in the July 13 image shows seven locations where the concrete has been removed and replaced (three of the alterations appear to have been made to accommodate conduits beneath the main runway, possibly for drainage, irrigation, or sewage outfalls). All of the runway retrofitting was completed and no longer visible by early September, and the runway was quickly extended by 60 meters on each end, with a current length of approximately 3,125 meters. 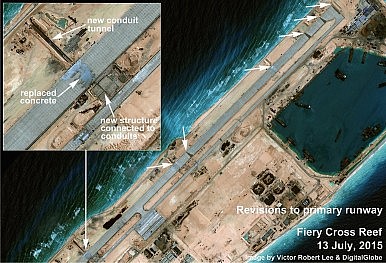 A new dark strip appearing in September images, paralleling the southern third of the primary runway, has been interpreted by some analysts as the paving of an additional airstrip, but it is more likely an agricultural buffer zone, according to Professor J. David Rogers, of the Geological Engineering program at the Missouri University of Science & Technology, who has familiarity with military installations in the Pacific region. 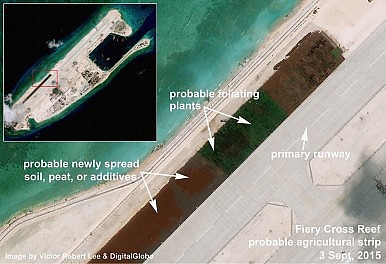 Rogers, who is a former U.S. Navy intelligence officer, points out in an email interview the “tillage/planting rows, perpendicular to the main runway axis” visible at higher resolution. He adds that a cultivation zone could “semi-stabilize the seaward side of the main runway, helping to reduce storm-induced erosion,” as well as potentially provide fresh produce. 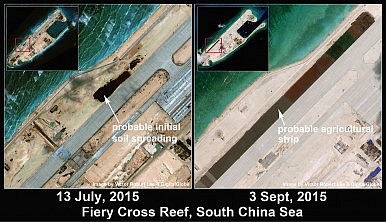 The July 13 image of Fiery Cross reveals what appear to be piles of imported topsoil additives dumped by trucks alongside the runway, to be spread and graded. Ribbed patterns now seen on parts of the dark strip are probably agricultural fabric row covers. 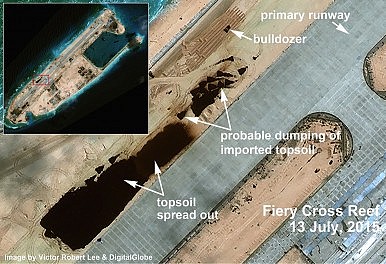 Fiery Cross Reef, Subi Reef and Mischief Reef are China’s largest military installations in the Spratlys, but they are still under construction and do not exhibit the more sophisticated defensive capabilities now present at China’s smaller bases on four other reefs in the Spratlys: Cuarteron, Gaven, Hughes, and Johnson South. These facilities are being equipped with state-of-the-art sensor towers, weapons tracking and firing platforms and tracking/firing guidance radars, as well as an array of electronic sensors and satellite communications infrastructure. For example, a satellite image taken August 23 shows that Cuarteron has a new antenna farm that Rogers considers reminiscent of Australia’s Jindalee over-the-horizon radar network, which has a range of up to 3,000 kilometers. 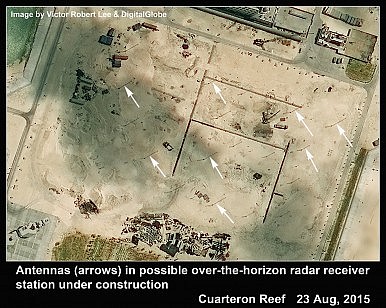 Cuarteron’s sensor array, still under construction, appears to be a matrix of pole antennas up to 19 meters high, as estimated by shadow analysis. Over-the-horizon radar has been cited as one system the PLA could use to cue the launch and trajectory of China’s so-called “carrier killer” missile, the DF-21D, which featured prominently in Beijing’s military parade in early September and is a potential threat to U.S. Navy warships. An over-the-horizon radar system positioned at Cuarteron, more than a thousand kilometers from China’s nearest coastline, could significantly extend the theater for the PLA’s anti-ship ballistic missiles as well as provide redundancy if satellite or airborne guidance is compromised. 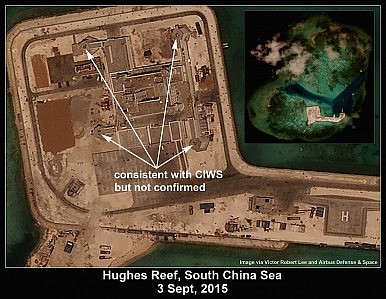 The new bases at Cuarteron, Gaven, Hughes and Johnson South additionally all have what appears to be a substantial billeting/command-control-communications building on the order of eight to ten stories tall, with elevated polygonal platforms that may eventually serve as weapons pads; the four platforms on the central building at Hughes show raised features consistent with a radar-controlled CIWS (close-in weapons system), but this cannot be confirmed at the resolution of the current images. 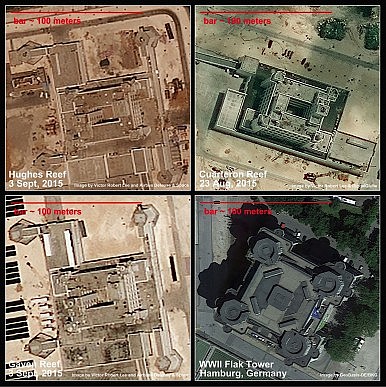 The size, shape and likely purpose of these buildings is evocative of a structure not seen anew since World War II: flak towers, some of which still grimly stand, due to the difficulty of destroying them, in Vienna, Berlin and Hamburg. The Pentagon, dating from the same wartime years, was frenetically built on wetlands using millions of cubic yards of trucked-in earth and 700,000 tons of sand dredged from the Potomac River – not unlike the massive and much larger undertaking now visible at Fiery Cross Reef.

It's Official: Xi Jinping Breaks His Non-Militarization Pledge in the Spratlys

In China's own words, Beijing is now building what it sees as "necessary military facilities" in the South China Sea.

The grisly video may have been purposefully leaked in order to terrorize civilians and deter them from supporting anti-regime resistance forces.

Ordinary people are struggling to keep pace with precipitous increases in the price of petrol, cooking oil, and other basic necessities.

What Do High Oil Prices Mean for Clean Energy in Southeast Asia?

Net energy importers may be forced into a quicker transition, but the same is not true of nations with a large amount of oil and gas at their disposal.

The government-led initiative should spearhead an effort to review and renegotiate the city-state’s social compact.