On May 14, Ramnariam Barma woke up determined to end his life. He had long been pondering this decision, and the government’s refusal to compensate him for the loss of his harvest was the straw that broke the camel’s back. “We had been losing money for four years because of the drought, but this winter’s heavy rains and hail have left us with nothing. I had borrowed 140,000 rupees ($2,200) from the bank and 130,000 more from other loan sharks to pay for seeds and for my oldest daughter’s dowry, and I knew I could not repay them.”

So Barma took a rope, told his wife he was going to the field with the buffaloes, and went instead to a high voltage tower near the hectare of land that he owns. He climbed onto the metal skeleton, knotted the rope, and when he put it around his neck some neighbors saw him. “Think of your six children! What will your wife do without you?” Police also soon arrived, and together they convinced Barma not to hang himself.

But the idea lingers. Now he fears the time when moneylenders, who have stepped up their pressure on him to pay, fearing he will soon commit suicide, will visit him at home with more than threatening words. “Someday they will come to torture me. But I have nothing to pay them, and nobody wants to buy my land because it has proven to be quite barren. The government has promised me 9,000 rupees ($140) as compensation, but that cannot pay for feeding or schooling for my children.” Barma’s youngest child, only 18 months old, stares at his father while he talks. He is barefoot, dressed only in tattered underwear, and shows a worrying lack of activity for a child of his age. His swollen abdomen indicates severe malnutrition. His mother, Shyambae, holds the baby on her lap and warns Barma: “If you kill yourself, I see no reason to continue living.”

In the small Indian village of Tendura, a set of dusty streets and mud houses that accommodate some 8,000 people in the northern province of Uttar Pradesh, the drama this family is experiencing comes as no surprise. In fact, in the first five months of this year, as many residents killed themselves. And everyone in the village is convinced that the number will continue to rise, because the harvest has been particularly bad and it adds to four years in which agricultural production has been hampered by another endemic problem: drought. “Most of the farmers have contracted debts that they now can’t repay. Many don’t see another way out, and just between March and May this year 65 people have committed suicide in the Banda district alone,” said Raja Bhaiya, director of Vidya Dham Samiti, an organization funded by ActionAid that is launching a grain bank “so that farmers can at least eat.” 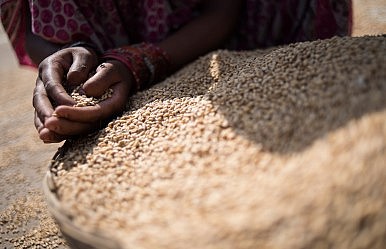 A farmer spreads wheat to dry in the sun in rural Uttar Pradesh. More often that not, extreme weather devastates the crops, leaving farmers and families to struggle. (Source: Miguel Candela)

Uttar Pradesh is not the only state affected. In fact, suicides have become the deadliest epidemic in India since the country decided to liberalize the agricultural sector in the 1990s. According to official statistics – which numerous NGOs say underscore the magnitude of the problem because they don’t include many cases stamped as doubtful –  more than 300,000 farmers have taken their lives since 1995. And although the Indian economy is experiencing a golden age, the weight of agriculture in the country’s GDP is falling steadily – currently at 13 percent despite providing jobs to about 50 percent of the workforce – and 2015 is becoming by far the worst year in the past two decades. “The number of suicides has doubled in most of the towns in the state. In some it has even tripled,” says K. S. Singh Yadar, health superintendent in the city of Lalitpur. Some specialists forecast that this year the toll will top 20,000. 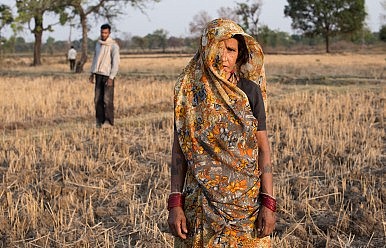 An Incentive for Suicide

For now, the only thing the government is doing to stop this crisis is to grant a controversial 700,000 rupees ($10,700) compensation to the families of farmers who take their lives, which many consider an incentive for farmers to take their own lives. And sometimes it is. Bhagunte Prajapati, a 37-year-old farmer, knows that well. Last March he found his father, Boothe Prajapati, hanging in the family barn. Boothe was 60, and he believed that the economic boost provided by the compensation after his death was the only way to help his family survive after the loss of almost all their crops.

“He had had two taciturn days, barely speaking. I found him dead when I brought him some food. I understand his desperation, because 28 family members depend on the harvest and we only managed to save around 300 kilos out of the six or seven tons we used to collect. That’s not even enough for our own consumption,” says his son, the eldest of six siblings and himself father of a further three kids, while holding the graphic image a local newspaper used to illustrate the event. “So now we barely have enough to eat and we will have to ask for another loan to cultivate the land next year. If we don’t get it I don’t know what we can do.” 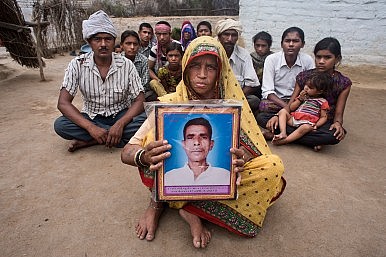 Surrounded by her family, the widow of Boothe Prajapati holds a photo of her husband. (Source: Miguel Candela)

The Prajapati family has already begun the complicated procedures to apply for the government compensation, but they don’t know if it will be granted. “We are expecting the bank to write off the debt of my father, but he didn’t tell us how much he had borrowed from local loan sharks, which generally accumulate an interest of 10 percent per week. We will have to negotiate with them when we are given the compensation.” If they actually get it, that is, because the government does everything possible to prevent suicide cases from being certified as such. “We aren’t worried because the autopsy showed that he hanged himself and the press has published his photograph, but other people have taken their lives in vain.”

A doctor at the public hospital in Lalitpur, who requested not to be named, acknowledged the hurdles. “It is difficult to deny the obvious when someone has hanged himself or cut his wrists, but it is easier in cases of poisoning.” And many of the farmers, around 40 percent of those who commit suicide, choose to do so by drinking pesticide or hair dye. Brijmohan Shukla was one of them. On April 10 he decided to drink the PPD Indians often use to darken their hair. He was only 28 years old. “Some kids found him lying on the side of the road. He had been vomiting something black, and was already dead,” recalls his mother, Parvati Shukla. “But at the hospital they said he died of natural causes.” The autopsy attributes his death to a cardiac arrest, and that’s why Brijmohan’s parents will not receive any compensation.

“It is true that intentional poisoning can eventually cause death from a heart attack, but it is also true that there are some families trying to pass a natural death off as suicide to collect the compensation,” says Singh Yadar. Parvati, however, claims they are not trying to take advantage of the law. “My son was under too much pressure. The bank had begun to send notifications to demand repayment of a loan, and we had arranged his marriage to a girl from a nearby village. But the harvest had been much worse than expected and we have not received any help. A few days earlier he had told me he did not want to live like this, but I thought I had convinced him not to do anything stupid,” she recalls, unable to contain her tears. “This is how the land collects our debts here.”

Zigor Aldama is the Far East correspondent for Vocento, the largest media group in Spain, and a contributor to El País newspaper, and is based in Shanghai. Miguel Candela is an award-winning Spanish photographer based in Hong Kong. Follow him on Twitter @miguelcandela_.