D.S. Hooda on the Lasting Impact of China-India Ladakh Standoff

Can the US and China Cooperate in Africa?

A 1936 Coup Attempt in Japan Holds Lessons for the US

Past Imperfect: The Future of India’s Farmer Protests

An End in Sight for the Philippines’ Maoist Insurgency?

The FC-31, China’s ‘Other’ Stealth Fighter

Did China Build a Spy Network in Kabul?

Since December 5, a phrase “[it] mainly depends one’s aura of elegance” has gone viral on major Chinese social media platforms. The trigger was a crossover-style photo from the latest album of a Taiwanese singer, in which she dressed and posed elegantly while holding a burger. On Sina Weibo, China’s largest Twitter-like service, the phrase is the top trending topic, attracting almost a million posts of discussion. Similarly, many WeChat users find their Moment Update dominated by the phrase, often along with the sender’s selfie. But while many lighthearted Chinese Internet users and celebrities are joining the trending hashtag and posting pictures of themselves, a number of enterprising commenters and cyber-essayists have employed the phrase to praise former Chinese President Jiang Zemin as “the man of elegance.”

This instance is a partial reflection of the recent wave of nostalgia for Jiang, which seems to have gained momentum, particularly since late last year. It started primarily as satire mocking Jiang’s toad-like presence and lingering influence over politics, but it has somehow developed into a sense of respect for Jiang’s achievement and talents. According to Baidu Trend analysis, the search frequency of “Elder,” a nickname Chinese Internet users often to refer to Jiang, has surged since late 2014. Underlying the sense of “toad worship” is a mix of critique of the political inefficacy and inaction during the Hu-Wen period and the rigid style of current President Xi Jinping, combined with seemingly growing admiration for Jiang’s outgoing personalities.

“(It) mainly depends on your aura of elegance.” In a WeChat Moment update, the author of a newly launched WeChat public account that mainly writes articles about Jiang, posted the simple phrase along with a profile picture of the former leader in suit. “The Moment update has been approved by hundreds of ‘Hasi’ and they invited me to write a report,” explained the author, “That’s why I compiled the ‘Worship Guidelines for The Developing Trend of the Yangzhou Sage’s elegance’ (Yangzhou city in Jiangsu province, southeast China is Jiang’s birthplace).” “Hasi,” which translates as “toad fan,” is what Jiang’s worshippers called themselves. While the ugly-looking “toad” (“haha” or “hama” in Chinese) is often used to refer to Jiang, “sage” is another friendly nickname for the 89-year-old Jiang, together with “Elder.” 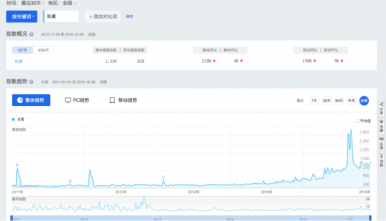 Graph showing the search frequency of the term “elder” or “长者” in the past two years on Baidu.

In the “guidelines,” published on December 6 in the WeChat public account, the author asked subscribers to “see how elegant President Jiang is.” Old photos of Jiang’s impromptu performance at a music show when visiting the United States in 1997, playing “Aloha Hawaii” on a ukulele in Honolulu, or floating in the Dead Sea wearing his signature high-waisted swim pants and goggles are included. Within a day, the post attracted over 16,000 views and 156 likes. The account was officially launched less than two months ago on October 26 as “a platform to improve ourselves through Jiang’s extensive and profound knowledge.

It is not alone. In 2014, a WeChat public account named “Seminar on the Selected Essays of Jiang” came out. Although the articles were text-based and written in a more serious and academic language than many other Jiang-related posts on the Internet, the account quickly attracted much traffic, mostly from media practitioners and other liberal-minded Chinese. On Zhihu, China’s Quora-like question-and-answer platform, a post asked “How to make sense of all the online birthday wishes to Elder?” Not long ago, a Weibo account named “Has Elder Died Yet” was set up, which updates with only one identical post per day: “No!”

Unsurprisingly, these accounts and posts were soon taken down by censors. But the sense of nostalgia and worship persists. Well-researched articles or videos depicting Jiang as a normal person with a human touch who speaks eight foreign languages and has emotional ups and downs are still widely shared on the Internet. One article featuring Jiang’s music talents, written by a Chinese cyber-essayist, was published on August 17, Jiang’s birthday, and has been viewed over one million times on Sina Weibo. One commentator said, “I am already in love with this artistic man.”

Underneath the nostalgia for Jiang, however, is not necessarily a genuine worship of Jiang or approval of his hawkish ruling style, but rather disapproval of the current leader Xi Jinping. Education-wise, Xi spent little time in the classroom for nearly a decade during the Cultural Revolution, later receiving his education in the ideology-ridden Tsinghua University, which is said to have increased his belief that the “born red” – children of the party elite – had earned the right to inherit the highest power, encouraging his authoritarian style. Jiang, on the other hand, developed his love for music – be it Western or traditional Chinese – and mastered English and other foreign languages while at school. This more liberal education helped shape Jiang as a relatively flashy (by the standards of Chinese leaders) but cosmopolitan and lively person who sang karaoke on state visits and recited the Gettysburg address to foreigners. In contrast, to many liberal-minded Chinese, the current Chines leader is a “chairman of everything” who has publicly lashed out at foreigners, launched a harsh crackdown on the Internet, introduced the infamous Document 9, put activists behind bars, and brought increasing censorship to academia. “Power has been centralizing since Xi Jinping took office. The rising neo-statism and aggressive foreign policy direction are all alarming to liberals,” observes Zhang Boshu, a Chinese constitutionalism scholar.

The partly contrast explains why more and more ordinary Internet users and even liberals identify as “hasi.” Shi Feike, a veteran Chinese journalist, for example, concluded that “The nostalgia wave for ‘ha’ is a natural outcome of the comparison with ‘bun.’ But actually, there is nothing to be nostalgic about. The trend in the past three decades has always been that each leader is less accomplished than his predecessor.”

Still, it may be a stretch to conclude that the only reason Chinese people are positive on Jiang is they are dissatisfied with their current leader.

“I think part of the group (referring to “hasi”) do that because they don’t like Xi. But others just genuinely find Jiang’s outgoing personalities adorable. At first, they joined the group just to mock him. But as they learned more about Jiang, they begin to genuinely like him,” explained a China-based journalist.

In a WeChat conversation and later in a publicly-accessible WeChat post, the authors behind the WeChat account said that they started the account solely because of their admiration for Jiang and had no intention of criticizing anyone. Said one, “We want to attract more followers and build a knowledge-sharing platform. At some point, we’ll have to move on and focus on more diverse topics.”

Note: Some time earlier, “Seminar on the Selected Essays of Jiang” was shut down by censors following a New York Times report. At the request of the owner of the Wechat account mentioned in this article, the name of the account and links to the relevant articles are omitted.

Lotus Yang Ruan (@lotus_ruan) is a M.A. Candidate in Asia Pacific Policy Studies at the University of British Columbia. She writes on China’s current affairs and studies social media. Read her portfolio or follow her blog here.

John Burgess on the Modern Life of Angkor Wat

Cambodia's wondrous temples reflect the various stages of the country's history, from colonialism to revolution to the present era of mass tourism.

D.S. Hooda on the Lasting Impact of China-India Ladakh Standoff

The Illusions of Post-Nazarbayev Kazakhstan

China is keeping its vaccination campaign homegrown -- despite some reservations from the public.

In the wake of the national security law, public trust in the government has reached new lows. That is inevitably impacting Hong Kong's pandemic response.

Ahead of the 19th party congress, news regulations put the focus on individual Chinese netizens.

Tencent, Baidu, and Sina are being investigated by the Chinese Cyberspace Administration.

Democratic artificial intelligence principles are an essential guardrail in the age of great power competition.

Farmers in Pakistani Punjab plan to take to the streets next month, hoping to generate some of the noise that their Indian counterparts have created.

To understand what motivated this month's coup in Myanmar, you need to understand the army's history and cloistered worldview.

The two sides initiated a disengagement along the banks of Pangong Lake in Eastern Ladakh. What happens next?

Myanmar After the 2021 Coup: Internal Security and Geopolitical Consequences

How will the February 1, 2021, coup in Myanmar affect the country’s internal security and foreign relations?

The Indian Army’s Pivot to the North

What’s behind the Indian Army’s reorientation of its Mathura-based 1 Corps toward China?

Can Europe Make a Difference in Myanmar?

How the EU reacts to the coup is litmus test not only for its support of democracy in Myanmar, but also for its capacity to adjust to new systemic challenges in the region.

Climate Cooperation With China Can Power the World – Sustainably

The Belt and Road is accused of exporting China’s coal addiction. But it could also be a platform for spreading green energy around the world.

The February coup in Myanmar should serve as a wake-up call when it comes to Sri Lanka.