Last year, the Air Force achieved a little-noticed aviation milestone: the first-ever drop of a winged, precision guided aerial mine. Almost fifty years after Texas Instruments slapped a laser guidance kit on a M117 dumb bomb, the Air Force added a guidance kit to a dumb mine, and greatly expanded the potential for aerial mining. The late arrival of precision capabilities to the antiship mine is no less revolutionary than it was for the advent of precision bombs in the first place, allowing precise placement of mines and improving the survivability of the employing platform. This development has the potential to revitalize aerial mining and add immeasurably to joint countermaritime operations. 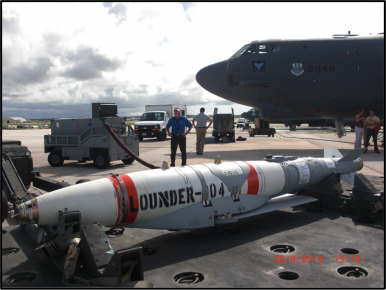 Since Vietnam, the standard naval bottom mine has been a variation of the 500-lb. Mk-82 or 1000-lb. Mk-83 General Purpose bomb. The same bomb bodies are used for Laser Guided Bombs (GBU-12 and GBU-16) or JDAMs (GBU-38 and GBU-32). The change that turns a bomb into a mine is the replacement of the fuze (which detonates the bomb on or just after impact) with a target detection device (TDD), which detonates the mine when a ship passes within lethal range. Mine assembly is completed with the addition of a safe/arm device in the nose and a parachute-retarder tailkit in the back (see Fig. 2), turning a 500-lb. Mk-82 into the Mk-62 Quickstrike and the 1000-lb. Mk-83 into a Mk-63 Quickstrike. All Quickstrike mines are air-delivered. 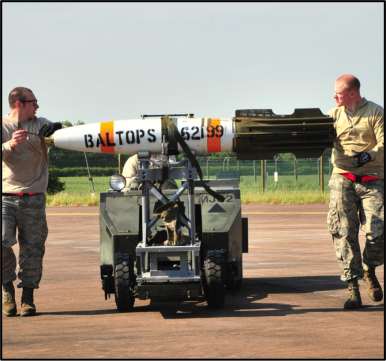 Quickstrike mines are bottom mines, meaning that they are laid in relatively shallow waters and sit on the bottom waiting for a target. Mine TDDs control the detonation of the weapon based on preset conditions and sensor inputs. The legacy Mk-57 TDD is a magnetic/seismic mine, meaning that a ship must have a magnetic signature and generate pressure waves appropriate to the target settings. The newer, microprocessor-driven Mk-71 TDD is magnetic/seismic/acoustic and is both more selective and more resistant to minesweeping than the Mk-57.

Figure 3: Component breakdown of the Mk-62Mod0 Quickstrike Mine (US Naval Academy)

The delivery of mines has proven to be the greatest challenge. Air delivery of mines was first accomplished in 1939, when the Luftwaffe attempted to mine the Thames estuary. The effort met with little success as most of the mines landed on mud flats and were recovered by the British, compromising their German-invented magnetic fuze. British mining efforts, called “gardening,” were designed to block canals, rivers and coastal traffic, pen in U-boats, and make inshore operations around the British Isles very challenging for enemy submarines. By 1943, U.S. Army Air Forces were mining in the Pacific theater. Operation STARVATION, a four-month mining effort by USAAF B-29s, essentially shut down Japanese maritime traffic in and around the home islands in 1945. B-29 drops occurred at all altitudes with mines dropped in strings, and about half of the mines dropped landed within a half mile of their intended placement.

Aerial mining was used in Vietnam, and was one of the key factors that led to the Paris peace accords. Operation POCKET MONEY kicked off with a mere nine aircraft – and shut down North Vietnamese maritime traffic until the end of the war. Mine drops were conducted entirely at low altitude, which while not particularly accurate, were far more so than the mines delivered by B-29s against Japan. Mine delivery was risky in that it required low altitudes and relatively slow airspeeds, increasing the vulnerability of minelaying aircraft. In DESERT STORM, this vulnerability was highlighted when the first aerial mining mission from USS Ranger resulted in the loss of Jackal 404 and its crew, presumably to hostile fire. No combat aerial mining missions have been flown since.

The first enhanced Quickstrike mine was demonstrated in VALIANT SHIELD 14, when the Air Force B-52J and Marine F-18A+ employed the weapons for the first time. The enhanced Quickstrike comes in several variants, all of which are essentially assemblies of off-the-shelf equipment. The Quickstrike-J is a JDAM conversion of the Quickstrike and will come in 1000-lb. and 2000-lb. variants. The Quickstrike-ER is a conversion of a winged JDAM-ER, and will come in 500-lb. and 2000-lb. variants. Quickstrike-J has the same range as any other JDAM, while Quickstrike-ER is a glide weapon with a substantially extended range. Both variants are fully compatible with existing aircraft software and any aircraft that can employ the base JDAM can employ an enhanced Quickstrike. The benefits to the minelaying aircraft are substantial. Instead of making multiple slow passes at low altitude, aircraft can release all of their mines in a single pass from any altitude and need not directly overfly the minefield. Winged mines will greatly reduce the standoff, allowing minelaying sorties to remain outside the envelope of short range air defenses of the type that downed Jackal 404. No additional crew training is required, because there is no difference between hitting a set of surface coordinates on land or a set at sea.

The impact on precision minelaying cannot be overstated. Instead of laying a random pattern of mines in a loosely defined container, mines can be laid directly into harbor mouths, in shipping channels, and into canals, rivers and inland waterways. This will greatly reduce the number of mines required to have a significant effect, and will increase the possibility of blocking ship transit corridors. The standoff range of the Quickstrike-ER will allow “flyby” mining, whereby the adversary may not have any idea that a minelaying mission was conducted. Precision mining also allows a degree of target selection in that small minefields can be placed in the approaches to naval bases, potentially limiting the impact on other shipping. The reverse is also true.

Mines are obviously an antiship weapon but historically their primary target has not been warships. The primary targets of antiship mines are transport and bulk fuel vessels. While it is certainly true that the tactical intent of a mine is to sink a ship or submarine, the strategic impact of minefields is to interrupt the transport of supplies necessary to maintain an economy or sustain a war rather than to disable individual warships. Under the Hague Convention, all minefields must be declared, but not all declared fields must actually be mined. The hidden nature of the weapon means that the first confirmation of the presence of the minefield is often the detonation of a mine. Even though the US gave North Vietnam a 72-hour delay in mine activation, no metal-hulled warship or transport braved the minefields until after operation END SWEEP was completed after the war’s end. END SWEEP resulted in the detonation of one mine – at the end of the war the North Vietnamese coast was interdicted by the threat of mines only, most of them having “sterilized” themselves at the end of a specified time.

The addition of precision and standoff to aerial mining capabilities represents an aviation first for the United States. The implications of this new capability for countermaritime efforts are substantial in that a single fighter aircraft with a relatively light payload can emplace a militarily significant mine threat from range. The off-the-shelf nature of the enhanced quickstrikes should ease certification of the weapons on multiple aircraft and greatly expand the number and type of aircraft capable of becoming minelayers at need. The long range and responsiveness of US airpower, especially our long-range bomber force, means that minefields can be laid theaterwide on relatively short notice. The mix of long range aircraft and stealthy, persistent weapons will greatly increase the US conventional deterrent at a relatively low cost, giving our adversaries cause for concern. It is truly a new wrinkle in maritime warfare.

Col. Mike “Starbaby” Pietrucha was an instructor electronic warfare officer in the F-4G Wild Weasel and the F-15E, Strike Eagle, amassing 156 combat missions and taking part in 2.5 SAM kills over 10 combat deployments. As an irregular warfare operations officer, Colonel Pietrucha has two additional combat deployments in the company of US Army infantry, combat engineer, and military police units in Iraq and Afghanistan. The views expressed are those of the author and do not necessarily reflect the official policy or position of the Department of the Air Force or the U.S. Government.

The Antiship Mine Gets New Wings

Last used successfully in the Vietnam War, the air-delivered antiship mine is making a comeback.

The Antarctic Treaty System is vulnerable. As a signatory, what can Australia do?

In the last two years, the COVID-19 pandemic and the China-U.S. trade war have forced the New Zealand government to diversify its trade and diplomatic relations.

What’s Next for the Long-Awaited China-Japan-South Korea FTA?

Will RCEP be able to accelerate the negotiation process for the China-Japan-South Korea free trade agreement?