The Soviet railways system spun outward like a web from Moscow. Thousands of kilometers of broad-gauge tracks were laid in Central Asia during the Soviet period and later inherited by the newly independent states of the region. But the system was designed to serve the Russian homeland and independent Central Asia, while remaining solidly within Moscow’s sphere, has interests to the east.

Modern projects–largely funded by and intended to benefit China–are in the works but progress has been uneven.

By 1936, the Soviet Union had finished shifting the borders and composition of the Central Asian republics. With the inclusion of the former Karakalpak Autonomous Oblast into the Uzbek Soviet Socialist Republic in 1936, the modern map of the region took shape. The administrative divisions between the republics were not mirrored by the region’s railways. The Soviet Ministry of Railways operated regionally using four bureaus: the Alma-Ata Railway, Tselinnaya Railway, West-Kazakhstan Railway, and the Central Asian Railway. The first three covered Kazakhstan and northern Kyrgyzstan and the latter the rest of the region. 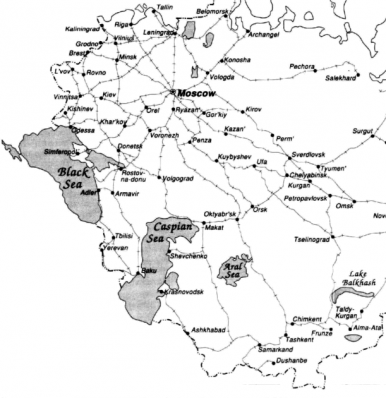 With the end of the Soviet Union, the rail systems inherited by Central Asia were cut off from their primary destination (Moscow) by a new international border and deprived of the Soviet expertise that had built and maintained them. A 2011 Crisis Group report on regional infrastructure noted that, “[t]he equipment is wearing out, the personnel retiring or dying. Post-independence regimes made little effort to maintain or replace either, and funds allocated for this purpose have largely been eaten up by corruption.”

It’s no surprise that Kazakhstan inherited the majority of the Soviet Union’s rails in the region. Kazakhstan merged the three bureaus covering its territory into one in 1997. Kazakhstan has over 14,000 kilometers of railways, followed by Uzbekistan (3,500 km), Turkmenistan (2,900 km), Tajikistan (680 km) and Kyrgyzstan (470 km)

One of the biggest problems with Central Asia’s railways is the gauge. The Soviet Union purposefully used a different gauge (1.520mm, now known as Russian gauge) than common in Europe at the time of construction and now internationally the standard (1435mm, known as Standard gauge). The result is that Soviet era railroads end at the borders of the former Soviet Union and in order to link up with other rail systems, such as Chinese (which use predominantly Standard gauge) they must undergo what is called a break-of-gauge. In order for trains, goods and passengers to continue over a change in gauge they must either be converted (there are, for example, engines and wagons designed with modular chassis systems that can be removed and replaced with a new set at the new gauge), or transloaded (transferred to a new form of transport like a truck or a different train). This adds delays and costs and can be inconvenient.

Still, the countries of Central Asia see railways as part of their larger development plans. In 2014 Kazakhstan, Turkmenistan and Iran opened a rail-link long anticipated because it connected landlocked Central Asia to the Persian Gulf. The Kazakhstan-Turkmenistan link opened the year before and led to a noticeable boost in trade. Kazakh exports to Turkmenistan doubled between 2013 and 2014, from $177 million to $353 million.

China–with its One Belt, One Road initiative–stands to benefit the most from Central Asia’s rail developments both as a destination and as a construction partner and financier. One of the snippets of news to come out of Kazakh Prime Minister Karim Massimov’s visit to China in December was an agreement for China Railway Group to help build 22.4 km of light railways in Astana.

China has projects in the works in both Uzbekistan and Kyrgyzstan, though the latter has been accused of delaying progress at times. In 2013, China agreed to spend $350 million on a railway tunnel in Uzbekistan. At the time bne Intellinews wrote that “[t]he tunnel will end Uzbekistan’s dependence on a Soviet-built stretch of line through Tajikistan…The existing line from the Fergana Valley, where most of Uzbekistan’s agricultural land as well as cities including Andijan, Fergana and Namanjan are located, to other parts of Uzbekistan runs through Tajikistan – a potential problem given the worsening relations between the two countries.” It was seen as the first step in connecting Uzbekistan to China and is allegedly nearing completion.

The Kyrgyz Prime Minister Temir Sariev, following his own December visit to China, said the country was developing cooperation with China in three areas: rail, roads and taking on excess Chinese production capacity. But Fozil Mashrab, writing in November, cast doubts on Kyrgyz commitment to its role in connecting Uzbekistan and China:

Despite apparent benefits as a transit country, Kyrgyzstan’s government has been slow and indecisive in implementing its part of the China–Kyrgyzstan–Uzbekistan railroad, while the country’s president, Almazbek Atambaev, keeps changing his mind on the project. In 2012, Atambaev called this railroad “the single most important infrastructure project,” which he strongly desired “to see implemented” (Azattyk.org, May 24, 2012). However, by late 2013, he reversed his position and dismissed the project as being of “little use for Kyrgyzstan itself and [solely benefitting] neighboring countries” (Azattyk.org, December 19, 2013).

A key concern is how Kyrgyzstan’s Eurasian Economic Union membership will impact its transport projects (especially rail) with China. Entry into the EEU has hit Kyrgyzstan’s formerly bustling re-export business hard and will elevate costs of transporting goods into Kyrgyzstan from China–now on the other side of both an international border and customs union. The benefits, however, will likely outweigh that concern. Kyrgyzstan, like the rest of Central Asia, needs to integrate into global markets and for a small, landlocked state, becoming a stop on China’s planned road to Europe is an opportunity not to be missed.

The seemingly benign commemoration of a Soviet-era youth organization speaks to bigger debates about Kyrgyzstan’s identity.

What's Next for the Belt and Road in Central Asia?

A Soviet Legacy: Solving the Problem of Nationalities