A European nuclear plant built and operated by China? Unimaginable, one might say, as China still has to prove to be a reliable partner in operating critical infrastructure, meeting strict safety requirements, and managing the complex technology. Yet, nuclear reactors are about to be built with Chinese participation in the United Kingdom. And that is just the beginning. Chinese power corporations are initiating new projects all over the globe and have the potential to become the next big civil nuclear technology suppliers for several countries (see the map below). As this trend is assuming shape, the next decade will be critical to ensure that Chinese technology is safe and that China adheres to non-proliferation agreements. 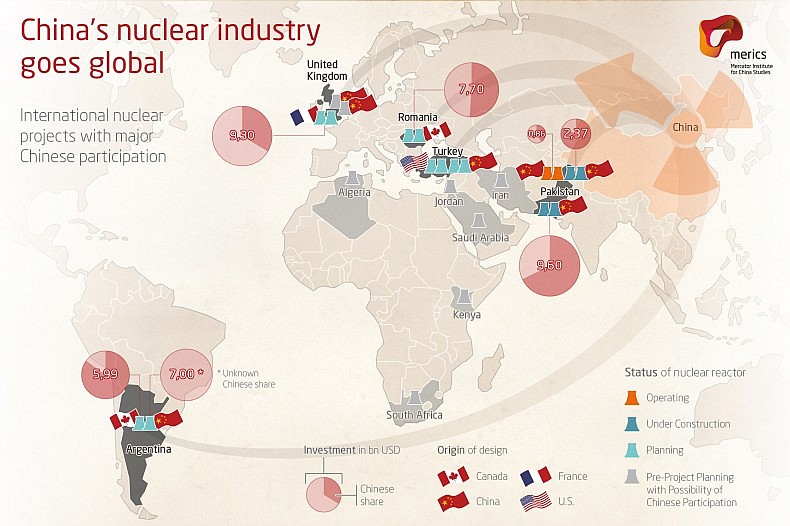 There is a strong desire among Chinese leaders to base future economic growth on innovation and to become a global supplier of high-tech commodities “created in China.” The objective is to seize strategic industries — photovoltaics, high-speed railways, computer chips and the like — and their global markets. The “One Belt, One Road” strategy is intended to shape global economic integration and trade by Chinese terms, advancing nuclear technology as one of China’s new high-tech export brands, as railways before. The business opportunities are tremendous, as building one nuclear power plant equals the value of several hundred thousand car exports.

Acting as salesmen, China’s leaders use any possible state visit to negotiate new nuclear deals, for which they promise generous financial backing. At home, everything has been in preparation for the “going out” years ahead. On basis of foreign technology and own original research, China has developed its own third generation reactors. The advanced reactors Hualong-1, CAP1400, and a high-temperature gas-cooled reactor design (HTR) are supposed to conquer international markets. To achieve that, the government is coping with combining the design development and global activities of the vigorously competing nuclear corporations.

China’s nuclear export ambitions coincide with an increase in market opportunities. As if the Fukushima incident did not happen, nuclear power is developing rapidly as countries around the world seek energy security and low-carbon power generation. And China wants a slice of that pie. However, China is fighting an uphill battle in a global nuclear market divided among the well-tested technologies of Canada, France, Russia, South Korea, and the United States. As Chinese home-grown technology does not yet enjoy a comparable reputation, the entry point for Chinese companies are projects that use foreign-built reactors, but use Chinese money and construction expertise.

All this is only the first step. These projects are intended to create overseas experience for the Chinese companies and build trust among current and potential customers. Ultimately, China seeks to sell its own reactor designs, especially the Hualong-1 and CAP1400. This strategy seems to have bright prospects for success.

The nuclear enterprises base additional Hualong-1 projects on preceding projects with foreign technology. The deal with EDF to build the reactors at Hinkley Point C also includes an agreement to collaborate towards constructing a Hualong-1 reactor at Bradwell. The UK government has yet to make a decision on the project. The Argentinian government already agreed to build a Hualong-1 at the Atucha site in Buenos Aires province.

China’s third largest nuclear enterprise, the State Power Investment Cooperation (SPIC), is in negotiations with the Turkish government about the construction of two CAP1400 reactors. CNNC’s most advanced projects are in Pakistan, with two Chinese small-sized reactors already in operation and two more under construction. In August 2015, the first Chinese overseas construction project for Hualong-1 started in Karachi.

How can China enter a market dominated by others for decades? Chinese firms offer a complete package including state of the art technology, financing, and construction services. With 30 nuclear plants in operation and 21 under construction at home, China has gathered plenty of knowledge about how to build and run a plant. In addition, the government supports the oversea projects with generous concessional loans (see table).

With these resources, the nuclear enterprises are able to initiate and revive projects that had previously stalled due to financial shortfalls. Before the participation of CGN, the Hinkley Point C projects ran out of funds despite a U.K. government loan guarantee of 2 billion pounds. Similarly, the Cernavoda project in Romania was on the verge of failure before when GDF Suez, CEZ and RWE, and other major shareholders withdrew from the project.

Nuclear power is never going to be 100 percent safe, but with its untested technology, China’s nuclear industry is under particular pressure to prove its reliability. Xing Ji, the chief designer of Hualong-1, claims that the reactor is among the safest in the world. However, China itself just began building its own demonstration projects for Hualong-1 in Fujian and Guangxi. Every future foreign project that might deploy technologies developed in China, and in particular the Karachi project in Pakistan already under construction, will be an adventurous experiment.

It will be essential for China to convince its prospective customers of its technology. In this regard, it made a step forward as the Hualong-1 passed the IAEA’s Generic Reactor Safety Review in December 2014. However, the greatest challenge will be to pass the European Utilities Review and similar procedures in the United Kingdom. This will not only take approximately five years and a lot of funding, but also put the reactor design through thorough examinations. If the Hualong-1 can obtain these core approvals, it will experience a real boost on global markets. The results of these assessments will critically decide the success of Chinese overseas ambitions. The assessments will have to be very strict, in order to avoid any possibility of a Chinese reactor experiencing a negative incident in Europe or anywhere else.

Chinese-built reactors in countries with a mature nuclear regulatory framework will hopefully be as safe as the existing reactors in these countries. However, Chinese nuclear enterprises also try to tap markets without much previous nuclear experience such as Kenya, Jordan, and Algeria. Chinese nuclear regulators, already grappling to supervise the rapid domestic nuclear build-up, will hardly be able to ensure the safety standards of exported nuclear equipment. China’s future customers will likely also have insufficient regulatory regimes to assess the safety implications of nuclear projects.

China will also face pressure to comply with non-proliferation regimes as it expands its nuclear energy trade. In Pakistan, China has the most favorable conditions for testing its technology abroad, and no competition from other suppliers. Pakistan is currently the most important buyer of China’s home-grown nuclear technology. For the CNNC, which builds these reactors, its Pakistan activities are central for its global strategy.

However, these deals may undermine global regimes intended to control the spread of nuclear weapons-related materials and technologies. The Nuclear Suppliers Group, which unites the most important supplier countries of nuclear technology, prohibits the supply of nuclear equipment to non-signatories of the Treaty on the Non-Proliferation of Nuclear Weapons such as Pakistan. China is undermining this rule with its activities at the Chashma and Karachi sites. These engagements can further aggravate the security situation in Southern Asia.

Thirty years from now, we will possibly see dozens of reactors outside of China built by Chinese companies and possibly even using Chinese designs. It is therefore of the highest interest for both China and its foreign customers to make sure that the technology is safe. The experiences with the demonstration projects of Hualong-1 in Fujian and Guangxi may decide China’s success in the global market.

If Chinese technology turns out not to be safe, international customers may refuse to buy Chinese technology despite the fact that it will be offered with generous financial support. China has a lot homework to do if it really wants to become a major global supplier of nuclear technology. A pivotal step to demonstrating the reliability of the technology is a more transparent nuclear industry and safety regime within China itself.

Jost Wübbeke is head of the economy and technology program at the Mercator Institute for China Studies (MERICS) in Berlin. Guan Ting is a visiting academic fellow at MERICS.

Ramping up growth in the nuclear industry will be crucial to achieving China's emissions goals.

After Huawei, the Nuclear Question Looms Large for China-UK Relations

Planned Chinese investment in the British nuclear sector is the next big sticking point for London and Beijing.

China may scale down plans for nuclear power because of slowing demand for electricity and construction setbacks.

Is nuclear power the answer to China's clean energy quest?