I met Matthew Hartzell, the author of “Matt Hartzell’s China Blog,” in Kunming in early 2014. Once a Harvard history student, he lived in Yunnan for six years, until 2015, and while there one of his hobbies was mapping the region. He’s since moved to San Francisco to prepare for grad school, and has recently made a few fascinating posts concerning his use of the Chinese survey site Zhihu, which is analogous to Quora (zhihu means “do you know?”). 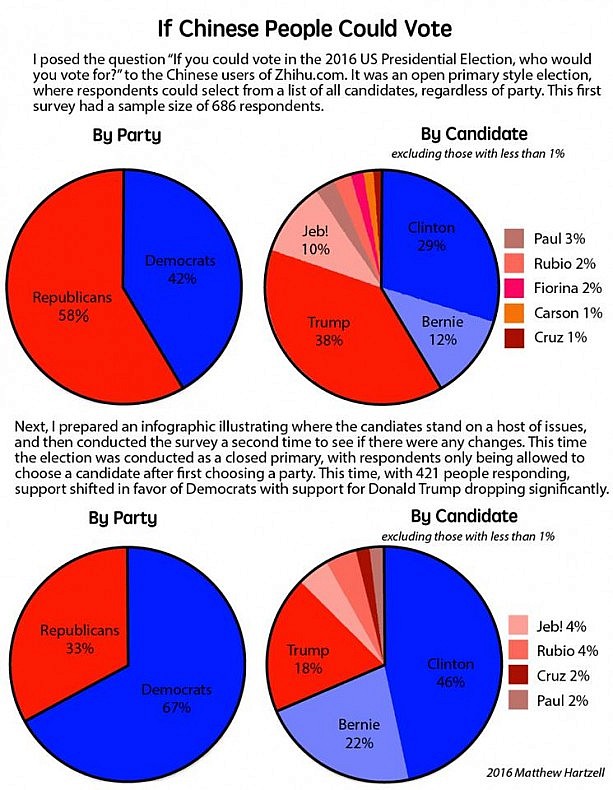 Then Hartzell created an infographic (in Chinese), explaining where the candidates stand on a host of issues (21 in all) such as abortion, gay rights, gun control, and marijuana legalization. This time, he ran the survey as a closed primary, so that respondents could only choose a candidate after having selected a party.

Once his readers were better informed, they voted quite differently. Republicans had captured 58 percent of the vote in the first survey, but only managed to hold 33 percent in the second. Trump was the big loser, falling by 20 percent, while Clinton and Sanders benefitted the most, jumping 15.35 and 12.6 percent, respectively.

Finally, Hartzell had readers complete a 10-question political compass quiz (which he admits was designed by a Libertarian activist group in Berkeley and may be somewhat biased). He’d previously tried the much longer quiz by the website The Political Compass, but says many of the questions fail to translate into Chinese culture, only a handful of Zhihu users replied, and also, the entire post was eventually deleted.

“I figure that this one will get deleted at some point, too,” he says. “That tends to happen on Zhihu with political content. But sometimes the censorship is arbitrary and hard to predict. I’ve had political content on there for months that’s never been deleted, while other things get deleted within days. You’re never very sure where exactly the ‘line’ is, and I think they keep it that way on purpose.”

Hartzell received 2,500 responses to the quiz, and the results were surprising. Most respondents turned out to be “moderate,” with significant numbers of more extreme “communist,” “liberal” and “libertarian” respondents, but almost none in the “conservative” category. 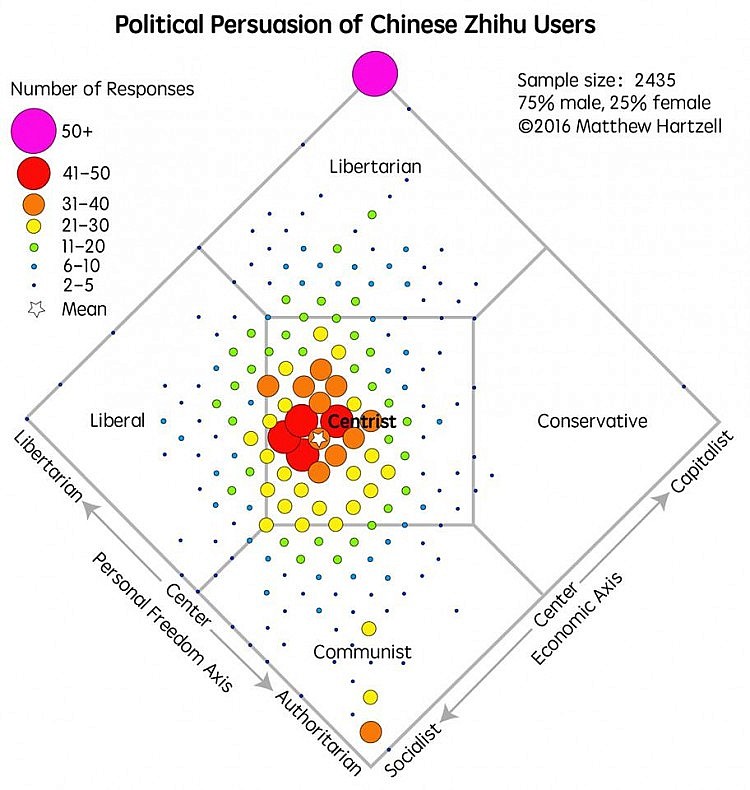 “The high number of responses at the two extreme corners seems like an error,” Hartzell comments, “but respondents are telling me they’re not in error. That’s just China for you.”

He is, however, careful to emphasize that this is not a scientific survey and that the sampling pool was not random.

“I’d say the biggest conclusion one could draw from this is that the vast majority of Zhihuers who answered my survey are slightly left-leaning moderates,” he notes. “I’d previously gotten into some arguments with other users on Zhihu and I’d assumed they were coming from a conservative point of view (I’m a liberal), but now I see that they were probably libertarians or authoritarians. Although I’m more liberal than moderate myself, I think it’s pretty heartening to see that this many folks are this moderate. Of course, if you expanded the sample size, it’s hard to say what would happen. You’d probably see a lot more authoritarians.”

When I ask him what inspired him to do this, he replies that he’s a social scientist with an interest in politics who, because of Chinese censorship laws, doesn’t get a lot of opportunities to discuss such matters online with Chinese. Talking about U.S. politics is one way of jumping that hurdle while gaining some insight into how Chinese think about certain issues.

“I invested a lot of my time and energy in China and care about its future,” he says, “and so understanding the mindset of young, educated Chinese today is meaningful to me.”

He adds that perhaps one reason why his activity hasn’t garnered more attention is because the majority of his content is decidedly apolitical, and that he often likes to pose questions that have no objectively correct answer, instead allowing respondents to describe their own perspectives. His next idea for Zhihu? Chinese sexual behavior.

“The media likes to say that the young Chinese generation (those born in the 90s) is much more promiscuous than those born in the 80s and earlier, and I kind of want to test if that’s true.”

If Chinese Could Vote in US Presidential Primaries, Who Would They Choose?

In an informal online survey, Donald Trump does well – until the respondents learn about his actual positions.

Watching the US Presidential Election From China

What has China thought of the bitter campaign between Hillary Clinton and Donald Trump?

What China Is Missing as It Watches the US Presidential Campaign

The worst aspects of Trumpism are already entrenched in China.

The hire is a clear recognition by Cambodia's government that it needs to repair its ties to the U.S. But will it work?

How Does Jokowi see Indonesia in the Post-Pandemic World?

There are signs that the COVID-19 pandemic has shifted the Indonesian president's view of his country's role in the world.

Has China Encroached into Nepali Territory in Humla District?

Prime Minister Deuba has ordered a "study" into the long-standing allegations.

The U.S. withdrawal from Afghanistan underscores the need for an enhanced diplomatic approach to the region.