The Chinese Internet has spoken: this year’s Chinese New Year Gala was the worst on record, and the main reason was a toxic dose of communist propaganda.

Every year, China Central Television (CCTV) spends up to six months perfecting the routines of thousands of performers for the gala, and Chinese Communist Party (CCP) officials sign off on every line to make sure it fits the government’s pro-regime message. Nevertheless, previous galas offered enough legitimately comic material to allow viewers (around 900 million last year) some enjoyment.

Unfortunately, this year’s agenda was inundated with propaganda aimed at inculcating viewers with “core socialist values,” and pushing Xi Jinping’s blueprint for successfully developing the country, the “Four Comprehensives.”

Perhaps the favorite target of Chinese netizens to attack was an elaborate rendition of the classic, “Without the Communist Party There Would Be no New China”: 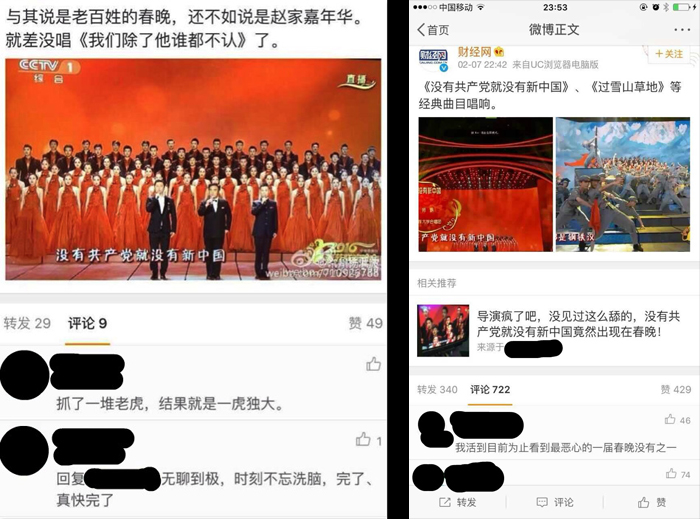 “After catching a heap of tigers, the result is one massive tiger.”

“Boring to the max, they haven’t even forgotten to brainwash us for one moment. It’s over. It’s really almost over.”

“The director must be crazy, I’ve never seen such sucking up, Without the Communist Party There Would Be no New China can even appear in Chinese New Year Gala!”

Wang Sicong, the outspoken son of Wanda Group’s CEO Wang Jianlin, made no effort to hide his disgust:

“I remember saying that last year’s gala was the worst garbage. It seems that I am still young. There’s no way I can watch this year’s gala without wearing the right items, I’m going to find my red scarf and Party pin.”

Others relied on imagery to get their point across: 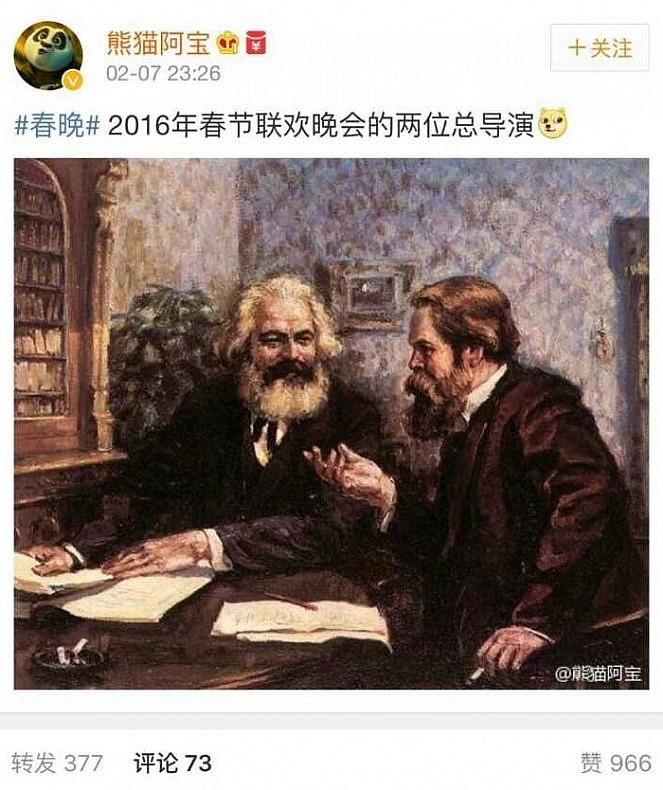 It seems that gala propaganda did not have the intended result, given that most Chinese viewers were bored out of their minds: 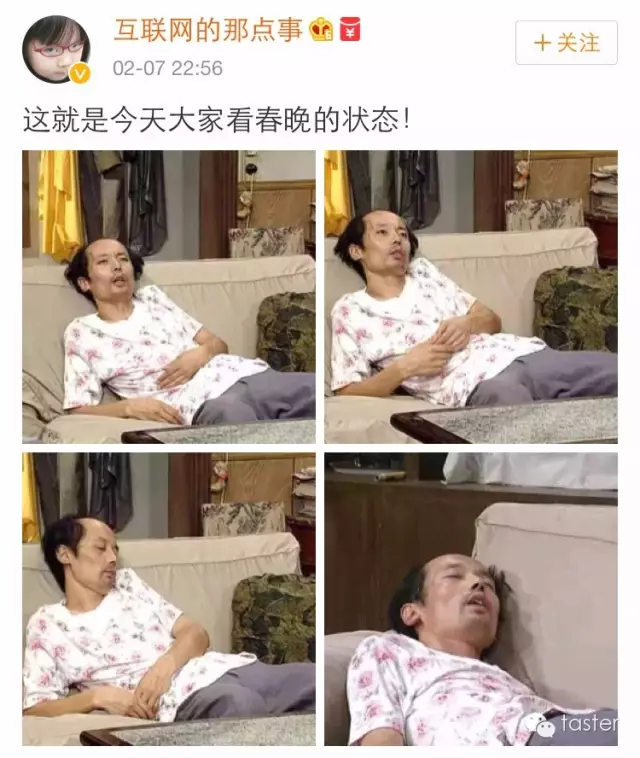 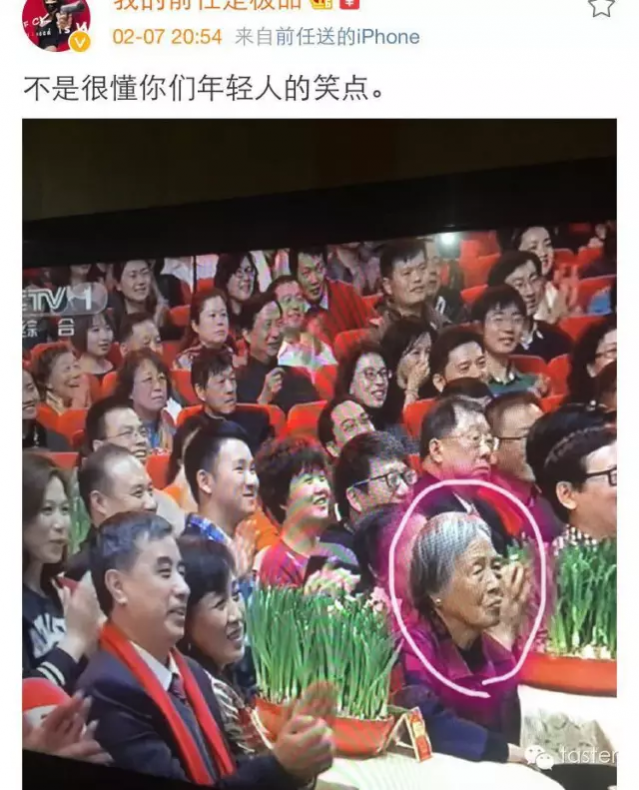 According to one image circulating online, Kang Kang, the monkey mascot of this year’s event, even considered ending it all: 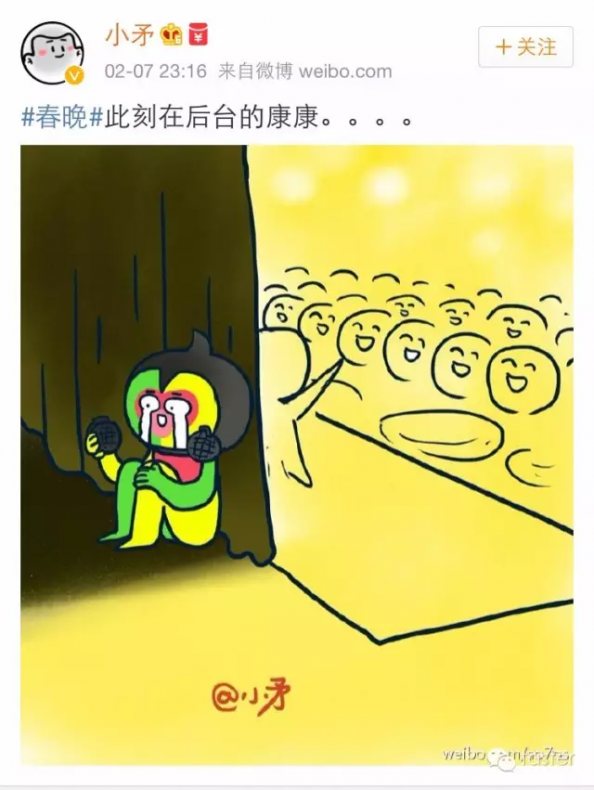 “Kang Kang back stage at this moment”

Given the Xi Jinping government’s ongoing efforts to indoctrinate its citizenry, we can only expect next year’s event to get worse. It will be telling to see if the 2017 gala will draw fewer viewers given this year’s disaster. China’s censorship machine is already hard at work trying to deal with this year’s fallout – a key source for this article was scrubbed from the Internet because the content was found to “violate relevant laws and regulations.”

David Gitter is an independent research consultant on Chinese politics and foreign affairs.

Can China's Propagandists Be the Emperors of Cool?

Further reflections on the changing -- and unchanging -- nature of Chinese propaganda.

The party-state is using its extensive information control toolbox to artificially amplify its version of Russia’s invasion.

The Great Translation Movement Shines a Spotlight on China’s Propaganda