Timur, or Tamerlane, is one of Central Asia’s most famous historical figures. Born around 1336 (though some place his birth in the late 1320s) amid the squabbling remains of the Mongol Empire, Timur would eventually claim an empire of his own stretching from South Asia to the Middle East, extending all the way from Delhi to Aleppo. Using tactics borrowed from the Mongols, Timur razed cities from Khwarazm to Iraq, slaughtering millions in the process and sending the skilled–artisans and craftsmen–back to his capital at Samarkand. For a man engaged in warfare for most of his life, Timur did not meet his end on a battlefield. 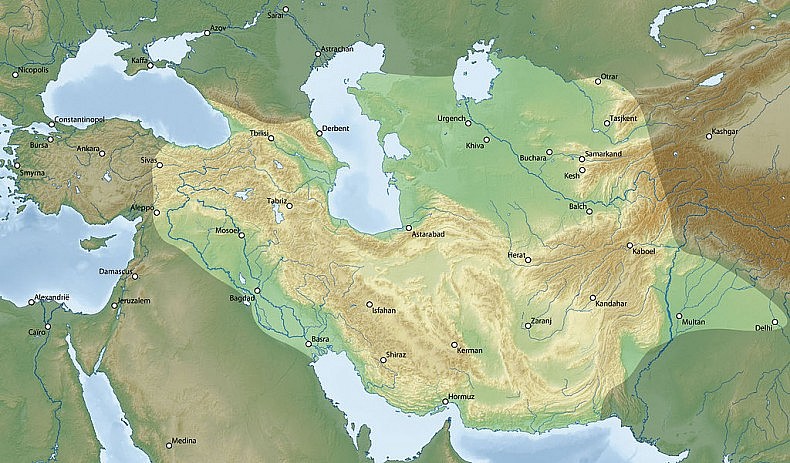 Timur’s empire at the time of his death.
Source: Wikimedia Commons/Stuntelaar

During a campaign in the Middle East lasting several years, Timur sacked Aleppo and Damascus and is said to have built a pyramid of heads in Baghdad. He exchanged challenge-laced and insulting letters with Sultan Bayezid I of the Ottoman Empire. In 1402 Timur defeated and captured  Bayezid. Bayezid had been in the west, preparing to lay siege to Constantinople, when Timur invaded from the east. Bayezid’s defeat at the Battle of Ankara, and his death in captivity a few months later, touched off the 11-year Ottoman civil war.

Shortly after Ankara, Timur decided to return back home. But upon his return to Samarkand he did not settle in to rule. Throughout his conquests Timur had capitalized on a powerful legacy, that of the Mongol Empire which he sought to restore. The Mongol Empire was fragmented and in decline by Timur’s time, but as historian Beatrice Forbes Manz noted “the empire remained ideologically vigorous.” Timur set out to take China back from the Ming dynasty, which had superseded the Yuan (itself the successor to the Mongol Empire in China, having been established by Kublai Khan, the grandson of Genghis).

In 1395, the Ming had sent an official embassy to Samarkand. But the letter Fu An carried from the Hongwu Emperor treated Timur “as a typical vassal of the Chinese court,” as historian Morris Rossabi phrased it. Timur detained the embassy and a second embassy sent in 1397. Some accounts say Timur had the 1,500 men sent with the first embassy executed.

Sharaf ad-Din Ali Yazdi, a Persian historian writing two decades after Timur’s death and drawing heavily upon the biography (Zafarnama) penned by Nizam ad-Din Shami, a contemporary of Timur, casts Timur’s designs on China as nothing short of divinely inspired, even if they led him to his death. Timur, upon returning to Samarkand, “form’d a design to make war on idolaters of China, hoping by that to obtain pardon of God for his former crimes.” Yazdi says “It was fitting that so great a hero as Timur shou’d die in the bed of honor, and that this inevitable accident shou’d happen during a journey he undertook for God’s glory…” Granted, Yazdi’s biography had been commissioned by a descendant of Timur from remains of his empire, which fractured soon after his death.

Divinely inspired or out of anger at an insult dealt by a far off emperor, Timur returned from his conquests in the Middle East and figured it was time to deal with the Chinese. He set out in early February 1405 amid a harsh winter. Timur, if he was born in 1336, would have been nearly 70 at the time. But as he gathered his army, estimated at more than 200,000 men, Timur became sick–whether from a cold, pneumonia or the plague is history’s secret. He died in the city of Otrar, now in modern Kazakhstan. As Rossabi wrote, “the Ming court had no conception of dangers it faced” but Timur’s death “saved the court and prevented the disruption of the state.”

Marlowe, Timur and Tamburlaine the Great

A Central Asian conqueror ended up starring in a play by one of Shakespeare's contemporaries.

A major exhibit in Washington, D.C., showcases the world's many Qurans.

The Silk Road, a “cultural artery," brought to the region all kinds of foreign influences.

Nothing substantive came from the single day visit, but an interesting historical footnote was brought up.