In the middle of the 1970s, if someone wanted to discuss Japanese popular culture, undoubtedly the conversation would revolve around its science fiction film icon Godzilla. No offense to the flying turtle Gamera and its loyal legion of followers, but Godzilla films not only ruled Japanese popular culture, but were shown around the world to much acclaim and sometimes good-natured derision. Today, in 2016, when one wants to discuss Japanese culture, the topic immediately turns to anime, and among anime titles, none permeates Japanese society like the franchise Mobile Suit Gundam.

Gundam birthed the so-called realistic robot show, where teenagers and adults alike climbed aboard 60-foot tall war machines and fought for or against a war for independence taking place in earth’s orbit among giant space colonies. The show became incredibly popular in reruns after an early cancellation due to the good, bad, and gray characters inhabiting its detailed world. Its first series aired in 1979-1980, and after three movie compilations and huge sales of model kits, sequels and new versions of the show have aired almost continuously or at least every other year since 1985. Mobile Suit Gundam: Iron Blooded Orphans currently airs as the franchise’s nineteenth series; in addition there are countless comics, a number of home video series, and some films to extend the stories. 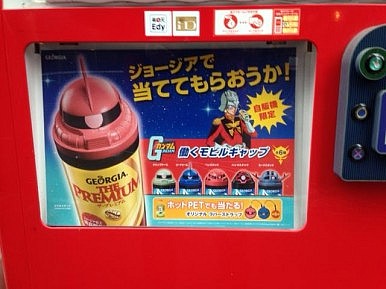 The best way to explain the pervasiveness of Gundam, especially the original series dubbed “First Gundam” to distinguish it from its sequels and alternative universes using the Gundam title, is to say it is something like combining Star Wars and Star Trek in the United States popular culture-wise. Everyone in Japan knows of Gundam, and almost all under the age of 50 have seen some of the episodes, if not one or more complete series. Comedians have made a career out of repeating dialogue or making jokes at the expense of characters. Toyota released a car fashioned after mobile suits piloted by First Gundam’s dashing villain. Gundam has sold a variety of products, from Cup Noodles to Pepsi products.

On my current trip to Japan, I found Gundam advertising within one block of my first two hotels. The first, in Yokohama, was an advertisement for a First Gundam-themed pachinko game; the other, in Kobe, was for First Gundam collectibles topping cans of coffee sold hot from vending machines.

The reason I am in Japan currently is to attend the first Tokyo Mechademia Conference. The Asian popular cultures academic conference (anime, manga, and video games) is normally held in Minnesota at the Minneapolis College of Art and Design, but this year the college sponsored two conferences: the first on the Aoyama Gakuin University campus March 18-20, 2016. I’ve come to Tokyo with my writing partner, Dr. Shinataro Mizushima, a lecturer at Doshisha University in Kyoto, to give a presentation called “The Influence of 9/11 and America’s Wars in Afghanistan and Iraq on the Mobile Suit Gundam Franchise.” In this paper we show that 9/11 and the subsequent U.S. wars had profound effects on the Gundam franchise, from the corporate decisions on the content best to broadcast in America in the years after the watershed events to how current events influenced creators of new Gundam series.

For example, after 9/11, the Cartoon Network cancelled First Gundam in the midst of its run. Bandai, the corporate owner of the franchise, then worked to create Gundam television programs that down-played the usual war-story made famous by the franchise, doing so in one case by focusing on a child under the age of ten living in an idealized future with antagonists played in over-the-top fashion like mustachioed 1920s film villains. In another Gundam anime, competitions between model-kit builders in the near future use advanced computer technology to pit these pretend weapons against each other in an arcade video game. In terms of content, post-9/11 writers and directors have created Gundam stories that deal with amputee veterans, snipers, and powerful pseudo-nations that declare war on any other state that dared to use violence against other peoples or nations. Other presenters in our panel discuss the anime Neon Genesis Evangelion and how its deconstruction of the mecha genre affected its fans, and the interweaving, rightly and sometimes wrongly as they are separate media, of anime studies and manga studies in the academy.

Scholarship on anime and manga has come a long way since the publication of Frederik Schodt’s book Manga! Manga! The World of Japanese Comics in 1983, as the Mechademia Conference’s very existence on two continents shows. Our presentation, in fact, is but a brief glimpse into the work on the Gundam universes we have been doing so far. This research, if all goes well, will culminate in a book-length manuscript that does two things. First, it interprets the sources and meanings behind the different Gundam television shows, films, and home video series; as with any good science fiction, it uses the present to portray the future. Secondly, it uses the different stories to examine changes in Japanese culture from 1979 to the present, especially the changes in gender roles. These changes have perhaps not occurred fast enough for Japanese women demanding career equality with men, but have been happening nonetheless. We hope to publish our completed work in time for the fortieth anniversary of First Gundam in 2019.

William B. Ashbaugh is professor and chair of the History Department at SUNY Oneonta.

Demand for bluefin tuna is such that any progress in restoring its depleted population draws pressure for bigger catches.

The missing Japanese make up about half of the 2.4 million soldiers who died overseas during Japan's military rampage across Asia.