Like all professional militaries, the Chinese People’s Liberation Army (PLA) instills in its troops an understanding of and dedication to the vital missions and finest traditions of its forces. In the past, the PLA published a compendium of this knowledge called The Soldier’s Handbook. Reading a copy from 1992, it becomes clear that while the PLA’s missions have grown along with China’s interests, its traditions have endured. Over the next several articles, I will examine how this basic PLA knowledge applies today.

The information in the Handbook runs the gamut: military history and geography, famous generals, soldiers, and battles, and institutional structure and purpose. It begins with the great Marshal Nie Rongzhen’s workmanlike calligraphic dedication: 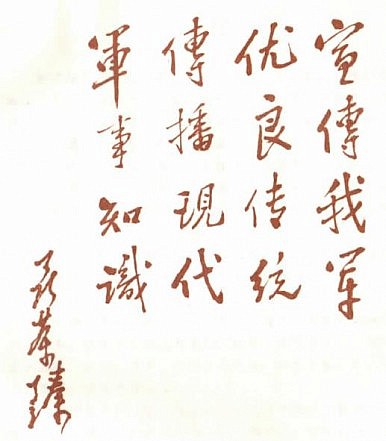 With this terse command, soldiers begin to learn about the PLA’s structure and purpose. The Central Military Commission was and is the highest command authority, under which fall the main offices and services. These however have undergone significant reforms.

While the PLA’s main mission is warfighting, it is also expected to support civil efforts such as disaster relief. The PLA was further expected to conduct economic activities on its own such as farming and industrial work. Once a source of public funds, these side businesses grew corrupt as commanders reaped personal gain from them. A divestment campaign in the late 1990s removed many of the businesses, but incentives for corruption have remained.

PLA missions today have added a number of military operations other than war, such as humanitarian assistance abroad, counterpiracy, and peacekeeping. Hu Jintao dubbed these tasks Historic Missions in the New Period, which Western analysts half-jokingly termed the New Historic Missions.

Chinese citizens have a duty to serve in their military and may be conscripted. Practically speaking, however, military work is attractive enough to lure more volunteers than are needed. Those who do well and are willing to stay on after their first enlistment become noncommissioned officers (NCOs), the military’s frontline leadership. The PLA has consistently attempted to improve the quality and expand the responsibilities of its NCOs, but much work remains.

In addition to the officers, NCOs, and enlisted members common to all militaries, Deng Xiaoping in 1988 established the corps of civil officers. They are considered cadres (officers) without rank, although they are graded just as officers are (see the Field Guide: The Culture of the Chinese People’s Liberation Army, page seven for a description of the grade system). They frequently serve in positions such as medical and technical experts. President Xi’s wife, PLA entertainer Peng Liyuan, was also a civil officer.

After learning about the overall structure, we have the service member’s oath:

I am a member of the People’s Liberation Army. I promise that I will follow the leadership of the Communist Party of China, serve the people wholeheartedly, obey orders, observe strict discipline, fight heroically, fear no sacrifice, work hard to improve my fighting ability, prepare for battle at all times, and under no circumstances will I ever betray the Military or the Motherland.

We will conclude this week with the PLA Military Anthem, heroic, rousing, and political (full lyrics here):

We are the sons and brothers of the workers and farmers
We are the arms of the people!
Fearless and unyielding, to fight bravely
Until we exterminate all counter-revolutionaries.
The banner of Mao Zedong flutters high!

The Chinese made-for-export VT5 tank is getting a new active protection system.

What Are China’s Military Recruitment Priorities?

The recruitment priorities of China’s military reflect, among other things, its growing technological sophistication.