The ballot held in Myanmar last November brought the first fair and peaceful transition of power seen by the country since the military seized power in 1962. Wracked by numerous insurgencies waged by separatists, social problems resulting from the large domestic drug trade, and anti-Muslim pogroms in the west staged by ultranationalist Buddhist monks, the victory of Nobel Laureate Aung San Suu Kyi’s National League for Democracy (NLD) is one of the few positive developments Myanmar has seen in recent decades.

The previous three elections held in Myanmar since the NLD’s founding, in 1990, 2010 and 2012, saw it either excluded from participation or its victories reversed by the military, leaving many in Myanmar and the international community with little hope of seeing a clear and uninterrupted transfer of power in the country.

This time, the NLD won an overwhelming victory, ending the pro-military Union for Solidarity and Development Party’s (USDP) domination of the country. It was the culmination of efforts over half a century to return to civilian government. The NLD secured an absolute majority in the landslide elections and gained enough seats in the upper and lower houses of parliament to overcome the mandatory 25 percent guaranteed to the army, allowing them to install NLD member and Suu Kyi confidant Htin Kyaw as the new president on March 30. (Suu Kyi was barred from holding office herself due to a constitutional clause restricting anyone married to a foreigner or having foreign children assuming the presidency, a policy created by the army and believed by many to specifically target her because of her marriage to the late David Aris and their two sons, all three being British citizens.)

Despite the overwhelming progress inspired by the NLD’s victory and the relatively balanced and fair nature of the 2015 elections, one aspect has left many of Myanmar citizens disenfranchised. Myanmar’s Muslims were excluded from running as candidates on the 2015 ballot, and the Rohingya, one of the country’s most oppressed and persecuted ethnicities, were not allowed to vote. Stripped of their citizenship and viewed as foreigners by many in the Buddhist majority country, the Rohingya have found themselves living in concentration camps in Myanmar’s westernmost state for the last four years.

Forced out of Rakhine’s (also known as Arakan) state capital Sittwe in 2012 after sectarian riots, 140,000 Rohingya now live in poorly maintained camps ringing the city or are allowed to remain in a cordoned off Aung Mingalar neighborhood. Policemen and soldiers man checkpoints surrounding the camps and deny the Rohingya freedom of movement. The camps suffer from inadequate medical care, food shortages, and rampant unemployment. Though a return to democracy presents an opportunity for the Rohingya to reclaim their rights, the future may still be bleak. The NLD purged itself of Muslims before last year’s elections, as reported in the International Business Times, and the stateless inhabitants of Rakhine have yet to see an improvement in their dire conditions. A senior official working for the United Nations who asked not to be identified due to the sensitive nature of the issue, told The Diplomat “This is worse than anything I have seen in my previous assignments. Everyone is on edge here and we have to tread lightly in order to maintain our activities.” 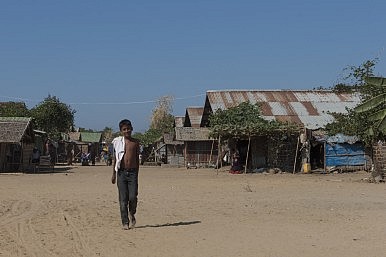 A Rohingya boy walks in the Sithmagi IDP camp outside of Sittwe. Jan 2, 2016  Source: Adryel Talamantes

Views about the election among Rohingya throughout Myanmar are mixed. Some voice optimism regarding the change of government, “We wish well for the NLD-led government and its president in regard to their relationship with the country’s marginalized minorities, including the Rohingya,” said Mayu T., a Rohingya from Maungdaw, a Muslim-majority city in Rakhine’s north. “Many are in ghettos now while others set sail en route to Malaysia.” Recently overshadowed by the European migrant crisis, refugees in Southeast Asia -many from Myanmar-remain problematic. According to the United Nations High Commissioner for Refugees (UNHCR), over 25,000 Bangladeshis and Rohingya paid smugglers to bring them to other countries in the first three months of 2015 as reported in The Guardian. Ironically, the opponents of reform in Rakhine insist that the Rohingya are immigrants from Bangladesh who seek better opportunities for employment; in fact, they face persecution in both countries, and many Rohingya would prefer to seek asylum in Muslim or Western countries.  The recent “No Rohingya” protest in Yangon held by Buddhist ultra-nationalists on April 29 illustrated the viewpoint clearly – that there are no Rohingya in Myanmar, only Bangladeshi immigrants. 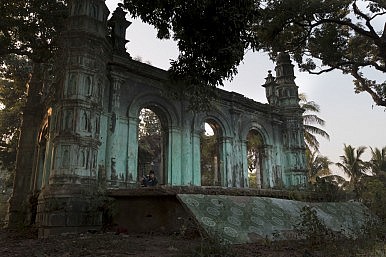 A Rakhine youth sits in the ruined Yenasu mosque that was destroyed during the 2012 violence, Rohingya no longer being allowed to visit it’s location in Sittwe. Jan 4, 2016  Source: Adryel Talamantes

A Rohingya asylum seeker in Malaysia offered his opinion. “I don’t think that Rohingya should return to Myanmar,” said Aktar Ismail, “but, if they do accept us, we should get all the opportunities that other ethnicities receive. I expect that the situation will change. It will change for the Shan and the Kachin [Buddhist and Christian minorities in Myanmar], not the Rohingya.” Prior to the NLD’s assumption of power, the prior pseudo-civilian government had been negotiating a series of ceasefires and peace agreements with separatist rebels in Myanmar’s east, north, and south. Notably, these attempts at conflict resolution have not extended to the west, where anti-Muslim Buddhist paramilitaries are leading an insurgency of their own. Earlier this year the Arakan Army killed several Myanmar soldiers in more than 15 battles as reported in The Gaurdian.

These insurgents hold an ambiguous relationship with the local politicians who continue to control much of Rakhine’s local government and who oppose the NLD. “My opinion on the NLD government is very positive,” asserted Myo Win, a Rohingya activist in one of the concentration camps, “but we are very much concerned about Rakhine State as the Arakan National Party won in the election. There was a 90 percent Arakan National Party (ANP) victory in Rakhine State, so there will not be any changes there.” The ANP worries that the NLD’s reformist agenda, popular with the Rohingya despite its apparent sectarian flaws, will bring demographic changes to Rakhine in favor of the Muslims. 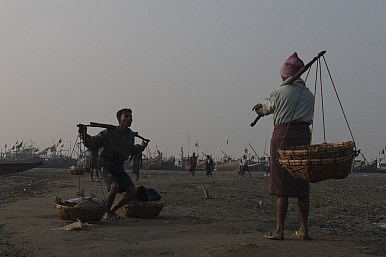 Rohingya men talk as they take a break from carrying fish from the fishing boats in Theychung village, the only area in the IDP zone where fishing is permitted by the authorities. Jan 4, 2016  Source: Adryel Talamantes

Ultimately the NLD will likely face challenges at the local and national levels in any potential confrontation over the Rohingya crisis. In addition to Rakhine’s Buddhist ultra-nationalists, remnants of the military government may oppose sectarian reforms. Less positive opinions are also present, “The NLD government is only able to change the country under limitations because 25 percent of the upper and lower parliament and administrative departments are with the military junta according to Myanmar constitution,” observed Sham Shu Anwar, a Rohingya from Maungdaw, “but we Rohingya believe in zero percent of the NLD government as its members always keep silent on the Rohingya crisis.” Position reception from the Rohingya has not been universal in the NLD, it would seem.

Two Rohingya leaders in Yangon, one an activist and the other a politician, seemed to have reservations about the new government. Former political prisoner Wai Wai Nu, once persecuted because of her father’s political activities summed it up briefly, “It’s good that we have changes, but it’s still too early to comment.”

Tayub Uddin, a Rohingya politician and vice president of the Democracy and Human Rights Party, gave The Diplomat a more detailed explanation: “It is good that we got a civilian government after more than 50 years. Certainly, changes will be there, but it will take time. The military is still too powerful. The three powerful ministries – Defense, Interior, and Border Affairs – are controlled by them.” All three play a part in the continuing suffering of the Rohingya. The Ministry of Border Affairs and its armed agents are feared by Muslims in the west of the country due to a long history of harassment by the government body, and are integral to the restriction of movement policy the Rohingya currently endure. He continued, “In the NLD itself, there are hard-liners. We do believe in Daw Aung San Suu Kyi. Let us see how things unfold, it is still too early to say. But one thing we are quite sure of is that strong international pressure must be there for a durable peace in Arakan.”

Adryel Talamantes is an American photography currently based in Southeast Asia. Austin Bodetti has been awarded a Mizna Fellowship and an Advanced Study Grant to conduct research in South Asia. Their work has been published in The Daily Beast, Global Post, USA TODAY, Vice, War Is Boring and elsewhere.

The iconic figure has signally failed the oppressed minorities who need her most.

The Mad Monks of Myanmar

In this photo essay, The Diplomat offers a close-up look at the anti-Muslim 969 movement on the rise in Myanmar today.