The words spoken by President Barack Obama in Hanoi, Vietnam in May resonated loudly with the people of Timor-Leste. The president reminded all that “Nations are sovereign, and no matter how large or small a nation may be, its sovereignty should be respected, and its territory should not be violated. Big nations should not bully smaller ones.”

Obama expressed this conviction in the context of the South China Sea territorial feuds, urging States to resolve disputes “peacefully… through legal means, in accordance with international law.”

As the president spoke, a miniature version of the South China Sea row is playing out in a corner of Southeast Asia between Australia and Timor-Leste. And setting a precedent, Timor-Leste in April became the first country in the world to activate Compulsory Conciliation – a dispute resolution mechanism under the United Nations Convention on the Law of the Sea (UNCLOS) – to compel Australia to settle permanent maritime boundaries in the Timor Sea.

In so doing, Timor-Leste made itself a test case for an approach to addressing maritime territorial disputes that can potentially be applied to the South China Sea and elsewhere. 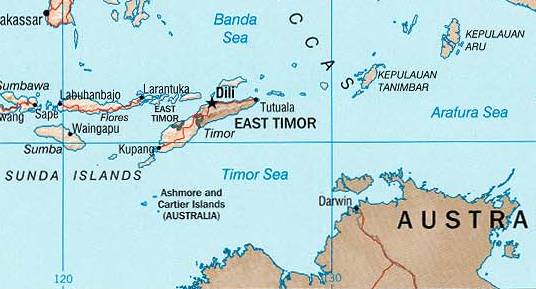 Just as the strategic location of the South China Sea and the natural resources beneath it have drawn great interest and competing claims, the rich hydrocarbon deposits under the Timor Sea – described by some as “the North Sea of the South” – have been one of the major factors that has shaped Timor-Leste’s difficult history.

Flanked by two giant neighbors, Timor-Leste endured a 24-year occupation by Indonesia during which a quarter of its population – some 200,000 souls – perished. More recently, it has faced skulduggery and espionage, with Australian spies planting listening devices in the Timor-Leste prime minister’s offices during treaty consultations.

The cumulative upshot of these machinations is Timor-Leste currently has provisional arrangements – namely, an oil and gas joint development and production agreement with Australia – in a swathe of the Timor Sea that should be the country’s Exclusive Economic Zone under international law.

Timor-Leste accepted these temporary arrangements under duress in the early years of its traumatic birth as an independent nation, with the expectation and understanding that Australia would subsequently enter into bilateral negotiations to settle permanent maritime boundaries.

It has now been more than 14 years and Canberra has persisted in its refusal to draw that line in the Timor Sea – the final 2 percent of Australia’s territorial perimeter. A boundary delimitation at the median line in accordance with the UNCLOS principle of equidistance would allocate most, if not all of the known oil and gas reserves in the joint production area as Timor-Leste’s sovereign territory.

It is still early in the process, but both Australia and Timor-Leste are now engaged in the preliminary steps of the proceedings.

The beauty of Compulsory Conciliation is that the process takes a relatively short 12-18 months, resulting in clear boundary lines being prescribed by a commission of Law of the Sea experts. A five-member conciliation commission comprising respected, independent experts on the Law of the Sea will seek to understand each State’s position, taking into account the letter of the law as well as other relevant elements such as historical factors and the presence of natural resources. The goal is to go beyond interpreting the law to help the parties to forge an equitable and sustainable agreement that reflects the principles of international law.

In the event no agreement is reached, the commission will submit a report to the Secretary-General of the United Nations, with recommendations to assist resolution. While the report is not binding, the States are obliged to engage in bilateral negotiations in good faith on the basis of the commission’s report.

As a half-island nation for whom the sea is of crucial importance, Timor-Leste currently has no permanent maritime boundaries with either of its two neighbors. Clear boundaries will provide the certainty needed to attract international investment for the development of the country’s economy.

The post-independence relationship between Timor-Leste and Indonesia has been excellent. Demarcation of Timor-Leste’s land border with Indonesia is almost finished, and Jakarta has committed to complete the drawing of maritime boundaries.

Despite the disagreement over the delimitation of maritime boundaries, the ties between Timorese and Australians remain strong and warm.

Earlier this year, thousands of Timorese demonstrated peacefully in front of the Australian embassy in Dili, in Manila, Jakarta, Kuala Lumpur and in cities across Australia, where they were supported by locals, including many Australian students and veterans.

Australian veterans remember a “debt of honor” toward the Timorese for their sacrifice during World War II when a proxy war was fought on Timorese soil by Australian soldiers and their Timorese friends against the Japanese Imperial Army. This kept the war largely off Australian soil, but led to the deaths of tens of thousands of Timorese.

For many Australians, this is also a matter of fair play. It upsets Australians’ inherent sense of fairness and decency to take advantage of Timor-Leste’s vulnerability, and for their government to have extracted deals from a much smaller and poorer neighbor under questionable circumstances.

On the Timorese side, passions run high when it comes to the issue of sovereignty. Timorese feel they paid in blood for independence – for sovereignty over their land, as well as their seas. Virtually every Timorese family has lost family members to the conflict and privations of occupation from 1975- 1999.

Fourteen years ago, U.S. President Bill Clinton and world dignitaries gathered in Timor-Leste to celebrate the country’s independence – the newest country of the 21st century – pledging help and support.

Fourteen years later, Timorese perk up their ears at the words of President Barack Obama, and look to America’s leadership to put substance to words, to uphold international law, to ratify UNCLOS, and to encourage the United States’ friends and allies to do the right thing in order to build – in the words of President Obama – an international order of mutual security rooted in rules and norms.

Grace Phan is a former investment banker and award winning broadcast journalist. She is currently a special advisor to the government of East Timor. The opinions expressed in this article are the author’s own.

What the rest of the world can learn from the first compulsory conciliation case under a multilateral treaty.

The agreement made at the Permanent Court of Arbitration in The Hague settles an old dispute.

Challenges and Opportunities: The View From Timor-Leste

"Now into its second decade as a sovereign state, Timor-Leste is ready to take its place in the community of nations."