BISHKEK — A Moscow printing warehouse was the site of a tragedy over the weekend. A fire resulted in the deaths of 17 workers trapped in a room with no emergency exit. Four were rescued and one later died, bringing the death toll to 17. Earlier reports said all 17 were Kyrgyz workers, but Kyrgyz media is now reporting that three of the dead were Russians.

In both Moscow and Bishkek, emotions were raw.

RFE/RL reported that a witness told Rossia 24, “There is a woman crying, her daughter died, she was only 18… [They did not escape] because there was no emergency exit.”

Abdygany Shakirov, a representative of the Kyrgyz diaspora in Russia told Reuters, “The incident happened when people were changing shifts at the printing house. It is very hard for us.”

A vigil was in Bishkek on August 28 and President Almazbek Atambayev declared August 29 a day of mourning. The day of mourning was also for nine Kyrgyz who died over the weekend in a road accident on the route between Bishkek and Osh. Around the capital, the many Kyrgyz flags fluttering in the wind in anticipation of the upcoming independence celebrations were lowered. And while entertainments were canceled, construction work continued across the city.

The government has promised to provide support to the families of those killed and injured and ensure that an independent investigation be conducted. Authorities in Moscow have reportedly launched a criminal investigation to check if fire codes were followed.

The head of Moscow’s emergency services, Ilya Denisov, told reporters that the fire began with a faulty lamp on the warehouse’s first floor and then spread up an elevator shaft to the locker room where the women were. The fire apparently happened during a shift change. 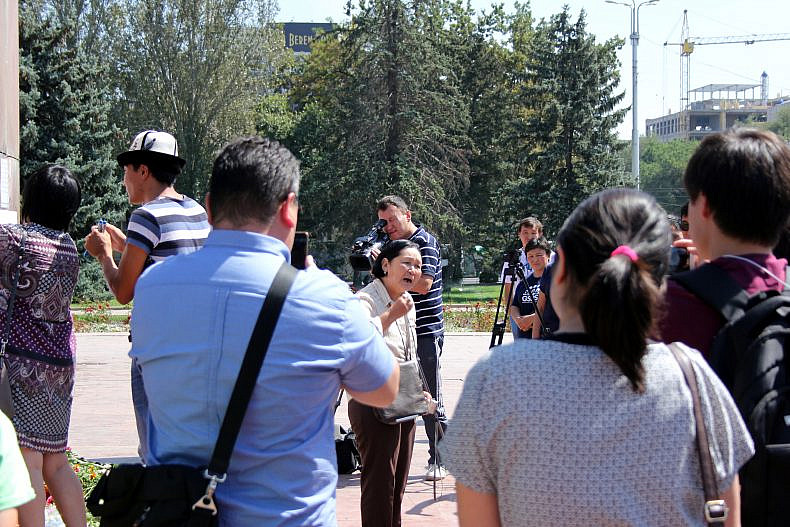 A woman speaks before those gathered at the base of the monument to the Martyrs of the Revolution during an August 28 vigil. Photo by Catherine Putz.

Some hoped the August 28 vigil, at the foot of the monument to the Martyrs of the Revolution, would be a silent one but a handful of politicians and others made statements before a gathering of mourners and a gaggle of local press while others laid flowers and wrote notes. Deputy Prime Minister Gulmira Kudaiberdieva, Farid Niyazov (the president’s chief of staff), and the leader of the Ata Meken party, Omurbek Tekebayev, made statements.

24.kg published photos and information about the 14 women killed in the fire. They ranged in age from 17 to 45 and were from all over the country. Surely many Kyrgyz families see in their faces those of relatives. More than 500,000 Kyrgyz citizens work in Russia where working conditions are often poor and migrants mistreated. Fire is a particular hazard in many of the warehouses and factories that employ migrant workers in Russia. Some witnesses accused the Moscow fire and rescue service as moving too slowly.

Both Russian and Kyrgyz leaders have made statements about investigations, working groups, and holding those responsible for poor safety conditions to account. But unfortunately, if history is any precedent, the problems that sparked this tragedy are unlikely to be fixed soon. As many news outlets have included in their stories about this tragedy, in January a fire at a Moscow clothing factory killed 12, including three children.

Kyrgyz Authorities Try to Head off Protests With Restrictions

Kyrgyzstani authorities are restricting protests about Russia’s war in Ukraine, but some public servants are speaking out.

Russia as a first destination for a Kyrgyz president is no surprise; it’s essentially tradition.

What About That Proposed Second Russian Base in Kyrgyzstan?

“It is up to Russia," said Kyrgyz President Jeenbekov in reference to suggestions that Moscow open a second base in the country.

President Sooronbai Jeenbekov made a working visit to Moscow less than a week after taking office.

What’s Behind China’s Ban on NFTs?

Chinese authorities have made it clear that they do not welcome financial elements of the new economy, including NFTs.