PURSAT, CAMBODIA: The first rainfall this year did not arrive until early June to Pursat, a province located in the northwest of the country, where land looked bare and thirsty at the height of the planting season. The devastating drought, which the government has described as the worst since 1979, adds to poor rainfall last year, when peasants had to dip into the drinking water dispensed by the government to irrigate their crops.

Soy Hourn and her neighbors in Pursat say they do not remember anything like this in more than a decade. “The radio said this year it would rain more than the previous [year], so we keep trying,” explained Phaly, a 27-year-old farmer. Her family and the dry land surrounding her small wooden shack were waiting impatiently for precipitation.

In Southeast Asia, the year is divided into two periods: the dry season and the rainy season, which usually reaches Cambodia in May and lasts until October. The arrival of the rains is key for farmers in the region — it’s when they start planting and wells for the rest of the year are filled.

After six months of the dry season, the months before the monsoon are usually difficult for farmers in the area, but conditions worsened dramatically in 2015 and 2016 with the arrival of El Niño, a weather phenomenon that causes excessive heat and decreased rains, in addition to food shortages. On average, El Niño occurs at intervals of two to seven years and can last up to 18 months. According to the predictions of climatologists, the 2015-16 phenomenon could become the strongest ever recorded.

Even with the arrival of the rains, there is no respite for farmers. Scientists now fear the arrival of La Niña, a weather phenomenon with opposite effects from El Niño. La Niña, which brings floods, could come in September, coinciding with the second planting season. The alarm recalls 2011, when heavy rain arrived after a prolonged drought. The combination caused flooding, displacement, agricultural losses, and the deaths of 2,000 people in the region.

Already, the consequences of the late arrival of rainfall this year have been disastrous. According to official data, about 2.5 million people have been affected across the country by the lack of water. By April, 19 of the 25 Cambodian provinces were classified as being in serious condition, requiring government intervention. Animals also have been strongly affected by the heat and lack of water and many farmers across the country have reported the deaths of fish, monkeys, and buffalo.

The economic consequences are unknown to date, with analysts still taking stock of the July rains. Rain in July is critical to the development of rice, and thus to the 60 million Cambodian farmers that depend on rice production. According to  the Food and Agriculture Organization of the UN (FAO), last year, rice production was 9.3 million tons, unchanged from 2014. The corn crop, however, was 400,000 tons, almost 30 percent less than the previous year. 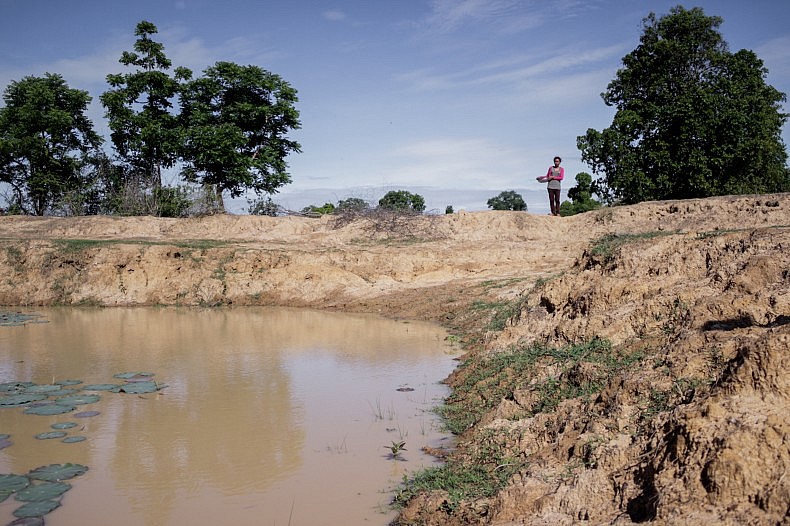 Phaly on the land surrounding her home in Pursat late June. Photo by Ana Salvá.

Delayed rains are not the only headache for farmers along the Mekong river, which meanders through China’s Yunnan province, Myanmar, Laos, Cambodia, Thailand, and Vietnam. According to International Rivers, revived plans to build 11 dams along the Mekong in order to obtain hydropower could pose a serious threat to the ecology of the river and endanger the welfare of millions of people.

“China’s dam construction on the Upper Mekong has already caused downstream impacts, especially along the Thai-Lao border where communities have suffered declining fisheries and changing water levels that have seriously affected their livelihoods,” the organization says.

Sopheak Meas, communications officer of the secretariat of the Mekong River Commission (MRC), explains that in some circumstances dams located upstream could help increase the flow of water in the downstream countries during the dry season when there is coordinated action among countries.

This happened recently when China released water from its Jinghong station to help alleviate drought in the  lower Mekong countries. The emergency release ran from March 15 to April 10, 2016. Still, as Meas points out, “If there is not enough rainfall during the rainy season, these dams will not be able to release as much stored water as needed to ease the effects of a drought, and they may also be forced to reduce their production of electricity.”

El Niño this year has also caused consequences in other Southeast Asian neighbors such as Thailand, the largest exporter of rice in the region followed by Vietnam, where at least 21 people died during a heat wave.

Vietnam, home of the Mekong Delta, in April saw the largest saltwater intrusion in 90 years due to low water levels. The effect of salt water in the rice fields is similar to pour boiling water on crops; along with the drought, it affected the livelihoods and food security of 2.3 million people in the country, according to OCHA, the UN Office for the Coordination of Humanitarian Affairs.

The drought also affected Laos, although to a lesser extent. “In Laos, the decrease in water has fewer effects on farmers than in the other countries, except in southern Laos where there is almost no irrigation and farmers rely heavily on rainfall and natural ponds,” says Meas of MRC.

In Pursat and other Cambodian provinces, organizations like Oxfam are trying to help farmers to increase the productivity of rice with less water. Recommendations include using a system of rice intensification to help farmers adapt to climate change and the cultivation of some vegetable species that are more resistant to drought and floods. Still, in Southeast Asia many farmers continue to use conventional practices that are not resistant to drought.

“Given that rice is a major staple for many in the world, decline in rice production could impact trade opportunities, causing a negative impact on livelihoods, and less food for consumption,” explains Minh Le, Oxfam’s Global Agriculture Advisor.

Other farmers in Pursat have been forced to give up their livelihoods entirely. Some have migrated to other provinces in search of work, or have even crossed into Thailand, a higher income country, to work on the construction boom.

The Last Farewell to the Mighty Mekong

The shrinking Tonle Sap, the river's “beating heart,” is the latest wake-up call of the damage wrought by dams.

Did Vietnam Just Doom the Mekong?

A policy reversal on Mekong dams has put Hanoi’s credibility – and the river’s fate – on the line.

Grading the Southeast Asian states on their environmental efforts so far this year.