September 28, 2016, marks the second anniversary of the Umbrella Movement – the peaceful protests that embodied a generation of frustration at the hands of a belligerent China. It was dubbed as Hong Kong’s version of the Arab Spring, and it perhaps came with the same kind of hope and determination.

The initial sit-in demonstrations were held at the Legislative Council building at Tamar Park, with hundreds of student in attendance. They were a direct response to China’s Standing Committee of the National People’s Congress’ decision on Hong Kong’s electoral reforms, which required the screening of candidates by the Chinese government. This gave rise to the slogan “We Want Real Universal Suffrage,” which was widely painted in Chinese on yellow Banners.

The Chinese government and its various mouthpieces initially denounced the protests, labeling them illegal and warning of death and injury if the people of Hong Kong did not obey the law. This was soon replaced by censorship, with all forms of reporting, or even social media mentions, banned across Mainland China. 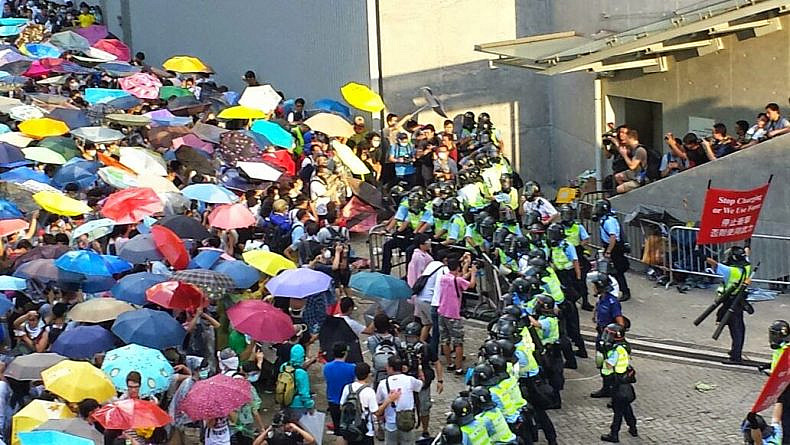 Protesters square off against police during the Umbrella Movement. The red sign on the right reads “Stop Charging or We Use Force.” Image by Cal Wong.

The Umbrella Movement was also a turning point in police-citizen relations in Hong Kong. The Hong Kong Police force — once regarded the finest in Asia due to its low levels of corruption and high levels of efficiency — were criticized for their use of force during the protests. It was the police that initially thoughtlessly forced the peaceful protesters out of Tamar Park on September 26, 2014, expecting them to leave. Instead the sheer number of students were forced onto the busy thoroughfares of Hong Kong’s central business district into the early morning. The Hong Kong authorities were shell shocked at the response, and were underprepared for the return of thousands of students the next day. On September 28, at a loss, police started firing tear gas at protesters. With nothing but umbrellas due to the drizzling weather, the students shielded themselves from the tear gas canisters — thus giving rise to the term Umbrella Movement.

Miscalculating their steps again, the police had inadvertently encouraged Hong Kong’s youth to mobilize. Within days, other groups had joined the student leaders, and a sprawling city of tents enveloped the streets, surrounding the legislative council, choking up the main thoroughfares and cross harbor tunnels, and forcing authorities to barricade police headquarters. For over two months, more than 100,000 people from across all sectors of society occupied several business districts of Hong Kong. It was not always peaceful, however; the government (either the Chinese or Hong Kong) was accused of colluding with criminal gangs, known as triads, to cause violent havoc in the tent city. Labor and union groups loyal to Beijing, such as the Taxi Drivers Unions, and even some clan societies clashed with protesters. Most notably was the police violence against protesters, either in the form of mandated forced removals, which were largely unsuccessful, or illegally in dark corners of the city. The most notable was the incident filmed by several public TV outlets showing seven police officers kicking and punching a handcuffed social worker and activist as he lay prone on the ground.

But after 79 days, the protest had run its course. Through a combination of lack of coordinated planning, and the Hong Kong government’s eventual sit and wait approach, the majority of protesters lost their faith in the movement, the government, and the police of Hong Kong.

No concessions were offered by the government, but it did give rise to a political awakening, as evidenced by the recent Legislative Council elections.

An organizer of the 2014 Occupy Central protest explains how Hong Kong keeps the spirit of Chinese democracy alive.

Tensions Over Pro-Independence Posters at a Hong Kong University Escalate

Multiple student unions jointly declare their intentions to defend the freedom of speech.

The slow erosion of Hong Kong’s civil and political rights has reached a pivotal juncture.

That judgment comes over two years after a police brutality case that scandalized Hong Kong.