China on the Sideline as Japan Plays Bigger Role in Kosovo

The Strategic Implications of Indian Corruption

CHOLPON-ATA — The handful of adventurous Americans who agreed to fly, with only two weeks notice, to Kyrgyzstan to play an ancient, brutal game were branded as a troop of Wyoming cowboys. They were among the more interesting guests at the 2nd World Nomad Games (not counting Steven Seagal, of course.) While only some were actually from Wyoming, and only one had ridden rodeo before, they all played the part on the U.S. Embassy’s stage in the Kyrchyn jailoo–a yurt camp set into a mountain pasture about 45 minutes from the hippodrome. The group entertained a crowd of Kyrgyz at the jailoo with “cowboy songs,” lasso lessons, and a hands-on whip-cracking experience that seemed somewhat unwise (the best Kyrgyz whip cracker was an ancient man with one tooth and a big grin; the worst swung the whip wildly amid a crowd of people and horses.) 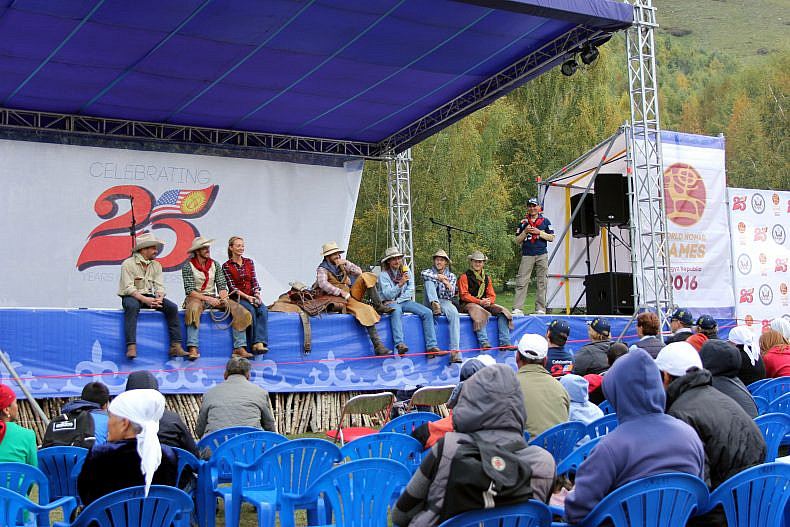 The Americans’ appearance at the jailoo may have been mostly performance–some of the cowboys are actually actors, after all–but when they took to the kok-boru field in the Cholpon-ata hippodrome it was the real thing.

The stars and stripes were an unexpected sight in the hippodrome. While a group of Peace Corps volunteers played the Kyrgyz version of mancala and a bone-tossing game called ordo, and a handful of wrestlers competed in the Gazprom building, the American kok-boru team was a true hit. The announcer, one photographer kindly translated for us on the sidelines, was particularly amusing. At one point telling the crowd, “If I spoke English, I’d be speechless.”

The head cowboy, Creed Garnick, had been to Kyrgyzstan four years ago on a cultural exchange program–introducing Kyrgyz horsemen to rodeo and learning a little about kok-boru–but none of the others had ever played the game.

Despite never having played the game, the Americans said they all said yes immediately to the idea. “Let’s go play a game we’ve never played, in a language we don’t understand, where you could possibly die. Sounds great, good,” one said. 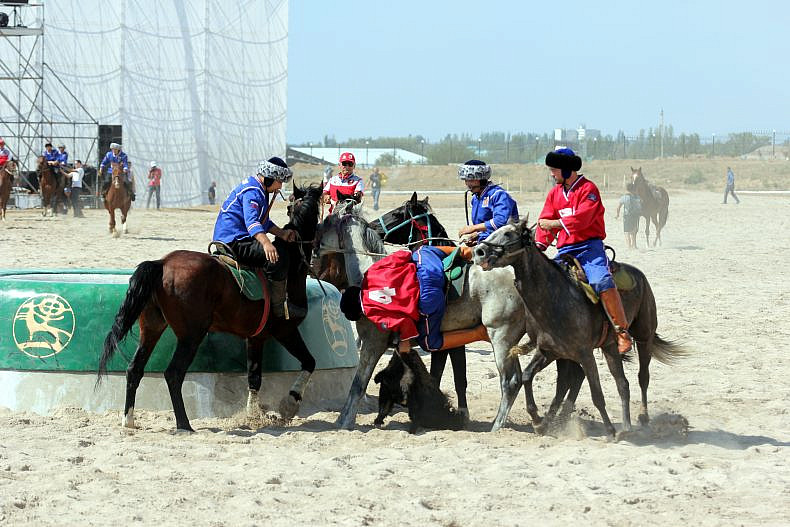 An American tries to heft the goat–about 70 pounds–onto his horse. Photo by Catherine Putz.

“Rodeo is eight seconds on a bull. This is an hour,” one of the Americans said after the group’s final match against Kazakhstan on September 6. In the two previous days they’d played China and a team from Russia, losing spectacularly each time by double digits. But losing didn’t dampen their enthusiasm.

“I’ve never felt like more of a man,” one said to reporters after their final match. The Americans had nothing but praise for their Kyrgyz coach, translator and the three teams they’d played.

“These guys are top-notch athletes,” one said.

“They’ve got great heart, and they’re compassionate, and they’re friendly. We could not ask for a better professional team to play against,” said another. “It was an honor to play with them, all three countries we played.”

Kok-boru is a brutal game. It starts with a slaughtered goat and traditionally ends in a feast, in between there are eight horses and riders at a given time fighting over the headless, hoofless 70-plus-pound goat carcass. The horses bite and kick, the players clench whips in their teeth which they flick at the horses and each other. It is not a game for the shy or squeamish.

The Americans were elated, talking excitedly after their final match about how they hope to come back in two years to play again. Kok-boru is likely better known to Americans as buzkashi, the name of the game in Afghanistan. Central Asia remains decidedly off the radar for most Americans and the cowboys were excited to share their experiences in the country with those back home.

“You tell people you’re going over to Kyrgyzstan and they really have no concept,” one said.

“We’d love to introduce [kok-boru] to the United States,” another of the Americans said. A third added that while Americans would enjoy the sport, it would need to be modified to fit American norms. The goat, in particular, is problematic. “You gotta kill a goat every time.”

“The good thing about the goat is the feast afterwards,” Garnick said, explaining that the goat slaughtered for the game was traditionally eaten by the winning team. “It’s not wasted. Its life is not lost. It’s a way for everyone to come together and value that life, and the sport, and each other.”

Though the Americans did not win, they said they’d been invited to share in the feast by their opponents. “We just spent an hour tenderizing it,” one joked. 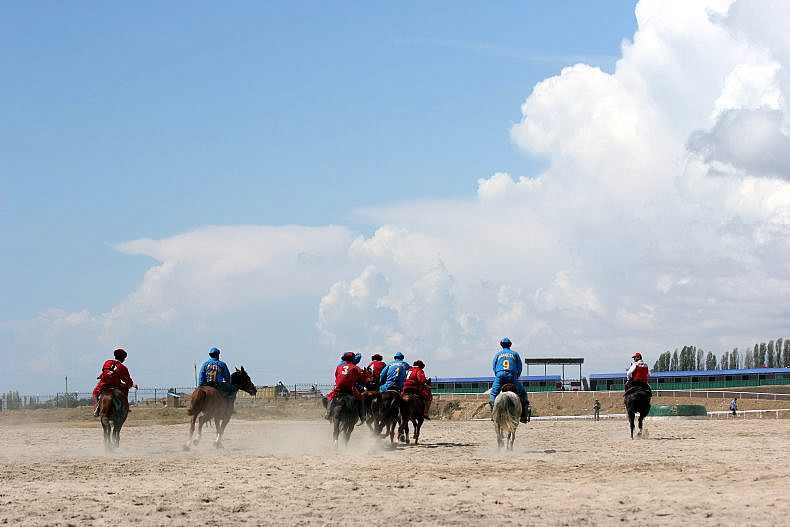 The Americans (in red) make a try at scoring against Kazakhstan. Photo by Catherine Putz.

Watching the team play it was obvious they were below amateurs. The American players had trouble just dragging the goat up onto their horse from the ground.

“Any time we got the goat it was wild,” one of the cowboys remarked, laughing. He then described how the other players–the Russians, Chinese, and Kazakhs–would give them pointers during the game. Several spectators saw moments of kindness amid the competition, like when one American player swung down to pick up the goat, a Russian player grabbed his jersey to help keep him from falling off the horse. The few American goals looked contrived to those of us on the sidelines, but the crowd in the stands went wild every time.

How India Got Here

China is on the defensive amid a global backlash, trying to move the narrative toward Xi’s “shared future for mankind.”

Belt and Road-related problems could prompt Central Asian states to re-engage more seriously with other actors.

The Meridian Highway Through Central Asia

Does a rising road lift all cargo trucks?

An agreement slated for September 2019 hopes to ensure equal pension rights across the EAEU.

The Shanghai Cooperation Organization Summit Kicks Off in Bishkek

Eyes on India and Pakistan, expected silence on Xinjiang camps, and another summit in the books.

Reports that the Taliban have recruited a Hazara leader are part of broader efforts to change the militant group’s image.

Some Afghans find themselves trapped in a dangerous, endless cycle of migration in a search for work, safety, and a better life.

Experts fear the Philippines president is testing the waters for a constitutionally viable declaration of nationwide martial law.

How is China taking advantage of the pandemic to pursue its foreign policy goals?

In Indonesia, Will COVID-19 Trigger Another Asian Financial Crisis?

History may not repeat, but it does rhyme.

Can Mirziyoyev’s Reforms Bring About a Real Free Market Economy in Uzbekistan?

The hope that reforms will ultimately bring about free market capitalism with accompanying democratic politics is utmost naivety.

Mahathir, along with his son and three other senior members, were expelled from the Bersatu party on Thursday.

What Do Taiwan’s People Think About Their Relationship to China?

A new survey delves more deeply into Taiwanese public opinion toward the ROC, China, and the nation’s future.

New Delhi should not miss the openings created by Beijing's aggression across a range of issues.