CHOLPON-ATA — Its name is Boomskoye. The way it sounds in English is a sound you hope never to hear as you wind your way through. The gorge, about two hours east of Bishkek, cradles the only sizable road to Balykchy and Issyk-Kul beyond.

The route–the Bishkek-Naryn-Torugart road–turns south for a bit and the Chu river appears, fleeing the gorge. The Chu river starts somewhere near Kochkor, runs north through Boom and then along the flatlands of the Chu valley–directed into canals on both sides as it flows along the border with Kazakhstan. It disappears somewhere on the Kazakh steppe, not quite reaching the Syr Darya.

As you approach the canyon, speeding through prairie-like plains, the mountains seem a shadow far away. The white caps are all that distinguish them from grey clouds hugging the horizon.

In some portions, the mountains are pulled back from the road and in others stone walls seem to be holding back the steep cliffs. On every hill there seems to be an electricity pylon. It’s early September but the valley still radiates with the burning heat of August. Summers are fairly dry in Kyrgyzstan, but the few rain storms have caused considerable trouble in this valley. 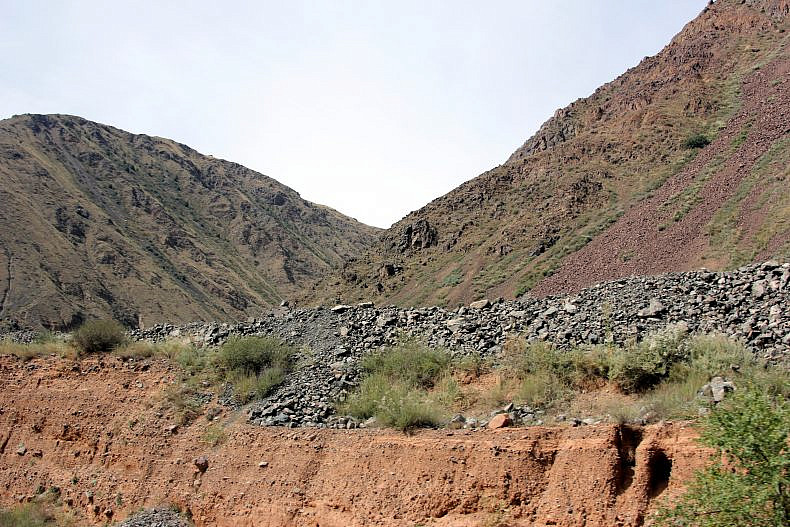 Loose rock on a hillside along the road through Boom Gorge. Photo by Catherine Putz.

There’s little evidence of the trouble as the marshrutka I’m riding in whizzes by.

The way is clear now but a few weeks ago the mountains, loosened by rain, rumbled down onto the road. Twice in July the road was blocked temporarily, once for a mud flow and then again by a rockslide that killed one man. In early August another rockslide cut the road.

Kyrgyz authorities had been motivated to clear the road of rock and rubble ahead of the World Nomad Games. Like the road from Bishkek to Manas International Airport, it seems it was completed just in time–they were painting lines on one section when we passed through on September 2.

“This is a nice road,” the man sharing my bus says. We’re both headed to Cholpon-ata to cover the second World Nomad Games.

Our translator says that the first car road through this valley was built by German prisoners of war during World War II and that recently the Chinese had repaved it.  The first snippet may not be completely true; a car road through the valley predates WWII, but it’s possible German POWs were used to repave it.

Anecdotally, some drivers say there have been more rockslides than in previous years. They point to recent reconstruction work undertaken by the China Road and Bridge Corporation and completed in 2015 as the problem.

As RFE/RL’s Kyrgyz Service reported in August, part of the work was to include the laying of new drainage pipes but local commenters told the service it wasn’t done and the new pipes are missing.

This would not be the first time China Road was at the receiving end of harsh Kyrgyz comment with regard to the Bishkek-Naryn-Torugart road. In 2011–a year after popular protests unseated Kyrgyzstan’s second president, Kurmanbek Bakiyev–Kyrgyz workers employed by a Chinese subcontractor on the project protested against China Road. They complained that the Chinese company was violating labor laws and basic safety practices. Kyrgyz workers said they were treated poorly–made to work 14 hour days without overtime in dangerous conditions–and discriminated against, with Kyrgyz workers paid less than half of what Chinese workers received. 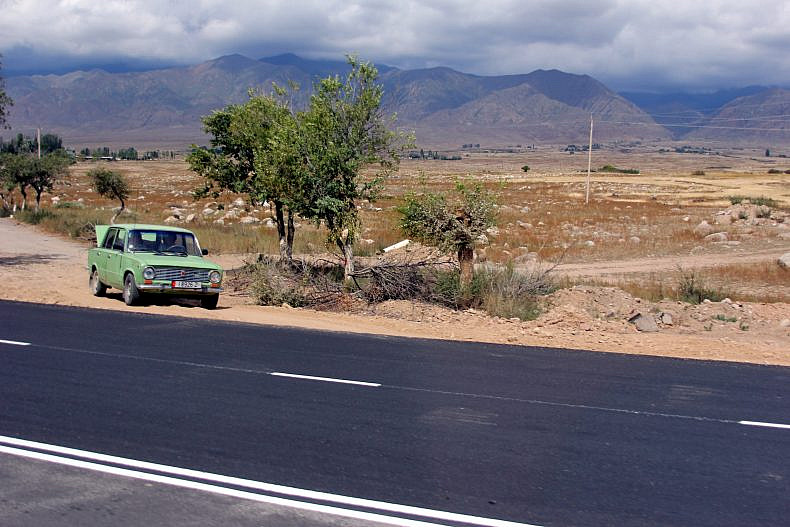 Part of the road past the Issyk Kul airport, freshly painted. Photo by Catherine Putz.

Another road project–a portion of the Issyk-Kul ring road–led directly to the resignation of Kyrgyzstan’s former prime minister, Temir Sariyev, in April 2016. Sariyev was accused of influencing the award of the road contract, making sure it landed with the Longhai Road and Bridge Corporation. A parliamentary inquiry discovered that the company didn’t have the proper permits, which should have stopped it from getting the $100 million award. Moreover, both a Turkish company and Kyrgyz company had underbid the Chinese company. Sariyev maintains he had nothing to do with the scandal and it’s not clear what will happen next in that matter.

The worst section of road between Bishkek and Cholpon-ata is a stretch between Balykchy and the tiny airport in Tamchy. An acquaintance in Bishkek told me the airport closed September 1–the end of summer–but as we passed the road out to the airport was lined with military vehicles, mostly trucks filled with soldiers–a visible sign of increased security at the games. 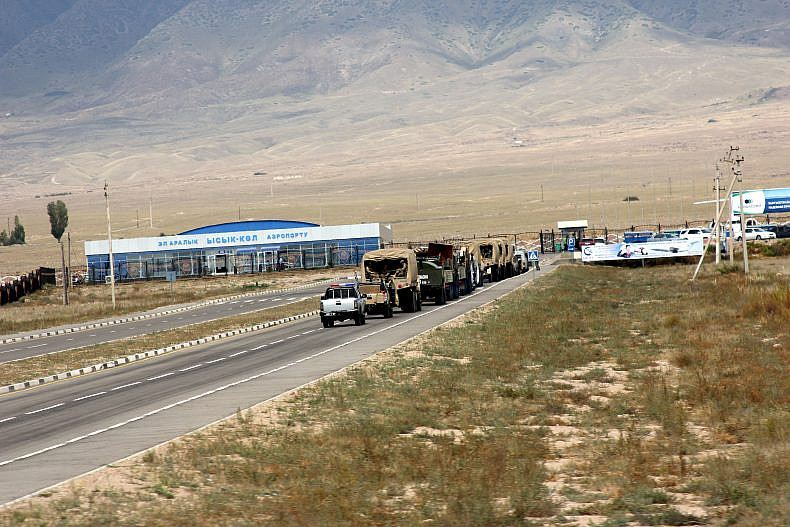 The road to the Issyk Kul International Airport, lined with troop carriers. Photo by Catherine Putz.

Suddenly, as the airport road met the main road, the pavement smoothed out again.

Can’t have the VIPs bumping along with the rest of us.

A Cambodian Ambassador in Washington

Despite the two nations' differences, Chum Sounry says relations are moving ahead.

The Smooth Road Through Boom Gorge

The road is smooth, for the most part, and cleared just in time.

In Central Asia, Chinese companies can score financing from both Beijing and local capitals. But is anyone profiting?

Tensions Flare at Kyrgyz Gold Mine

A brawl erupted between locals and Chinese workers, sending 20 to the hospital.

The noble idea of ​​value-based foreign policy in post-Merkel Germany could quickly reach its limits.

The corrupt system of the past might be gone, but the new chapter in Afghanistan’s history is unlikely to be much better.

In Nepal, Calls for Grow for the Restoration of a Hindu State

A resurgent Hindu nationalism in the former Hindu kingdom is drawing strength from India’s ruling BJP.

Aung San Suu Kyi inspired a generation of young people who are keeping the dream of freedom alive in Myanmar.

Australia Joins US in Diplomatic Boycott of Beijing Olympics

By Sheikh Saaliq and Askhok Sharma

Gen. Bipin Rawat was the most senior official in the Indian military and the first chief of defense staff, a position created by the government in 2019.