Satellite imagery, acquired by DigitalGlobe and Planet Labs, indicates the presence of the SU-30MKI Flanker H multirole fighters at Tamil Nadu’s Thanjavur airbase. The airbase, subordinate to India’s Southern Air Command (SAC), remains an important deployment location to project power from the southern peninsula. Thanjavur is the only airbase in India’s SAC where observers routinely see the frontline fighters deployed.

India’s more immediate threats, however, emanate from the country’s northeastern and northwestern flanks. India’s military planners and policymakers have long considered the likelihood of a two front war, confronting the air forces of China and Pakistan, respectively. In response, India has beefed up its military muscle, becoming the world’s largest arms importer — a pro or con depending on perception — built-up existing airfields, and developed capacities enabling the IAF to deploy in the region’s immediate neighborhood for strike operations.

By all accounts, the Indian air arm has transitioned from a supporting role for the country’s ground forces, which still receive the lion’s share of the defense budget (over 60 percent in 2015/16), to one that is responsible for expanded missions, including the strategic task of nuclear weapons delivery. To meet the IAF’s missions, the country began diversifying its defense acquisitions with Western technology while also promising a more robust defense offset policy, as previous iterations have not borne the types of knowledge transfer desired. But too much can’t be read into Western acquisitions. While India continues to press forward with its military modernization plans, the country’s efforts remain, and will be for the immediate future, centered on Russian equipment.

The SU-30MKI multirole fighter purchase is one such example. When New Delhi began talks with Russia’s Sukhoi Design Bureau in the mid-1990s, initial orders were tied to local production requirements utilizing India’s Hindustan Aeronautics Limited (HAL). Russia, one of the few countries Indian officials trust to supply sensitive technology, was to further build India’s defense industrial base. To what degree Russian tech has been transferred to HAL is left open to interpretation. However, since Russian deliveries began in 2002, the IAF’s inventory has swelled to over 210 fighters with orders expected to reach 272. Of those, more than 150 MKI knock-down kits have been assembled locally at HAL’s Nasik facility with varying degrees of indigenization. Nevertheless, with aircraft delivered at a rate of 15-20 per year, India expects to field its full complement of Flankers by 2020. Such orders make the Russian-built platform the single largest fighter in the IAF’s arsenal.

Therefore, when the South Asian power very publicly admits that almost half the fleet is grounded, it should give observers pause. In March 2015, Defense Minister Parrikar told parliament that “engine failure-in-air and engine-related problems” were reducing the number of aircraft operationally available for duty. The statement confirmed rumors that had long persisted among India’s military watchers. Up to 69 engine-related failures were documented at the time. India’s public watchdog, the Comptroller and Auditor General (CAG), stated that around 55-60 percent of the aircraft were available against the expected 75 percent. Although seemingly low, a year prior less than 50 percent were operational. Worse, a series of crashes since 2009 further spotlighted the Russian-supplied platform. Less than two months after Parrikar’s report, a sixth Flanker crashed near Tezpur, one of India’s frontline airbases in Assam. Notably, the pilots escaped unharmed, which was fortunate as India’s fighter-aircraft-to-pilot ratio still remains under target. 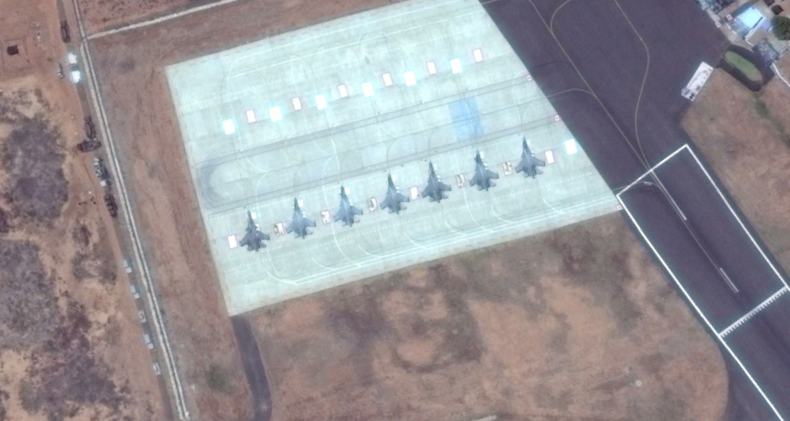 The satellite imagery, some of which is available in Google Earth, shows a detachment of seven advanced Flankers parked on Thanjavur’s northwest apron. They arrived at the airbase in August and were previously spotted on space snapshots in January. The latest flight departed the airbase by mid-September, Planet Labs imagery shows. The Thanjavur airbase is subordinate to India’s SAC, a command whose operations stretch from Lakshadweep in the Arabian Sea to the Andaman and Nicobar Islands in the Bay of Bengal. Given the growing importance of projecting force beyond India’s borders, the airbase was included in the IAF’s 15-year modernization program and publicized in 2005. Previous commercial imagery monitored the refurbishment of the now dual-runway air station since work began in earnest in 2011. Two years later, Thanjavur was inaugurated featuring a new parking apron, expanded turnarounds, taxiways, new radar and a lengthened runway to enable the take-off and landing of heavier aircraft. The latter is particularly notable, as India responds to natural disasters at home and develops a greater interest in providing regional humanitarian assistance.

To date, construction activity continues at the airbase with additional support buildings almost complete. The two triple-fence secure structures, typically erected near hardened munitions storage areas or aircraft dispersal areas, are likely associated with the airfield’s weapons handling activity. The structures stand at least 1000 meters apart and represent another sign that India is preparing to ready the airbase to support the advanced fighters. According to Indian press reporting, a Flanker squadron will be relocated permanently to the southeastern state by FY 2017-2018.

While we wait to confirm the full deployment, an update on India’s progress solving engine issues with the frontline aircraft has not surfaced. If India is prepared to stand up another Flanker squadron away from its most vulnerable areas, it could speak to greater operational availability, especially given India’s pending aircraft retirements. Alternatively, it could also mean that India is prepared to invest additional funds to build a new Russian-backed logistics center, providing spare parts for when engine failures do occur. While the latter may not be the perfect option, with the amount of skin India has in the game, New Delhi may not have much choice.

India’s first homegrown beyond visual-range air-to-air missile has been test fired this week as part of ongoing user trials.

As the Indian Air Force reduces the FGFA requirement, its fighter capacity continues to shrink.

The Trials and Tribulations of India's Armed Forces

While spending billions of dollars on defense equipment, India’s military faces a number of challenges in its quest to enter the 21st century.

India is investing billions in arms. But without a coherent organizational structure, it will never become an effective war fighting machine.