On October 28, 2016 the world’s largest marine protected area was announced by the Commission for the Conservation of Antarctic Marine Living Resources (CCAMLR), which manages fishing in the Southern Ocean as part of the Antarctic Treaty system. The Commission’s 24 member states plus the EU have been negotiating the agreement to protect the Ross Sea, the so-called Last Ocean, for five years. The agreement will protect an area of 1.5 million square kilometers, with a 1.1 million square kilometer area declared a “no-take” zone where no fishing will be allowed.

The new marine protected area (MPA) is certainly a major achievement, but the question must be asked: Is it a pyrrhic victory for conservationists? The marine reserve will expire in 2051 and the terms of the agreement are that it could be closed down any time one of the signatories requests it. The area protected is nearly a third of the original conservation plan and now covers a relatively small section of the huge Ross Sea. The agreement also doesn’t reduce the total volume of fish allowed to be removed from these waters. 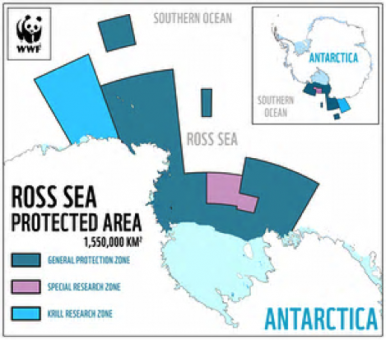 Putting a time limit on the agreement sets an unfortunate precedent for future global environmental protection agreements under negotiation, as will the failure to reduce fishing quotas on the vulnerable Antarctic toothfish, the Ross Sea’s most valuable marine living resource.

It appears that political agendas have ultimately trumped ecological values. After five years of negotiation both the states who raised the marine reserve proposal at CCAMLR and the NGOs that backed it were keen to get a resolution.

The Ross Sea MPA has been a political compromise from day one, not least for the proposing nations. The MPA plan was first tabled at the CCAMLR meeting in 2012 by the United States and New Zealand, after a last-minute merging of their separate proposals. Their combined proposal adopted the boundaries of New Zealand’s Antarctic claim, the Ross Dependency, and skirted around key fishing areas utilized by New Zealand boats. Sovereignty claims are a focal point of contention in Antarctic politics. Seven states claim territory in Antarctica, while the United States and Russia reserve the right to claim the whole of Antarctica. The 1959 Antarctic Treaty set aside the question of sovereignty; preserving the status quo without defining what it actually was.

As more and more states eye Antarctic resources, any perception that some states are gaining advantages by stealth will be resisted by others. This dynamic can result in the blocking or dilution of genuine efforts to protect at-risk habitats. There is a deep lack of political trust among many Antarctic states, as well as a deep conflict of values and interests, that is proving increasingly hard to reconcile.

China, Russia, and Ukraine vetoed the Ross Sea MPA in 2012; Russia alone blocked it in 2013, then both China and Russia blocked it in 2014. After the 2014 CCAMLR meeting, Andrea Kavanagh, a commission delegate and an environmental conservation director at Pew Charitable Trusts, angrily described China as “an across the board conservation-spoiler.”

In 2015, only Russia exercised its veto. So to the outside world, it appeared that Russia alone stood against the Ross Sea marine reserve, a cause that attracted the attention of a wide global conservation movement, including a 2 million strong petition led by actor Leonardo DiCaprio.

But China hadn’t changed it views, merely its tactics. China regards environment protection in Antarctica as a form of “soft presence,” so the boundaries of the Ross Sea MPA were sure to alert China’s suspicion. China has a long-term agenda in Antarctica and seeks to access every available right there. The core agenda of China’s interests in Antarctica have always centered on access to available resources, an inherently anti-conservation, anti-preservation stance that contrasts with the position followed by many other states engaging in Antarctica today. The Ross Sea has been identified as one of the most likely sites for hydro-carbons in the Southern Ocean. China has a well-advanced program of research investigating mineral resource potential in Antarctica and the Southern Ocean.

China’s CCAMLR chief negotiator told me that there wasn’t a clear scientific basis for the proposed boundaries of the Ross Sea MPA. But China would like to be seen as a good citizen in Antarctica and is particularly wary of offending Antarctic claimant states such as New Zealand and Australia. Three of China’s Antarctic bases are on the Australia Antarctic Territory and China plans to build a new base in the Ross Dependency. Behind the closed doors of the CCAMLR meeting this year the Chinese delegates tried to restrict the MPA to 20 years, while Russia proposed a mere 10 years. But China did not exercise its final veto to block the proposal.

Russia has four boats fishing for toothfish in the Southern Ocean, but the loss of potential rights were more important than actual interests. The head of the Russian Antarctic Expedition asserted that the marine protected area in the Ross Sea and another proposed for East Antarctica were a means to subtly extend territorial claims, would have a negative effect on navigation and scientific research, and contradicted the core principles of the Antarctic Treaty system.

In the last four years, as Russia’s international relations have deteriorated on multiple fronts, Russian leaders have been courted by diplomats, NGOs, and media stars to pass the Ross Sea MPA. Improving Russia-U.S. relations and demonstrating Russia’s cooperative role in resolving international issues were factors influencing Russia’s decision not to veto the marine protected area at the 2016 CCAMLR meeting. Russia’s support in getting the agreement passed was highlighted in U.S. Secretary of State John Kerry’s statement on the Ross Sea MPA.

The establishment of the Ross Sea marine protected area in its current format is a diplomatic and strategic win for Russia, China and other states who see Antarctica and the Southern Ocean as a treasure trove of resources; a win that preserves their long-term interests. They have succeeded in significantly reducing the environmental protection of the proposal and limiting its validity. The agreement will allow them to buy time to build up their capacity in Antarctica and to shape international support in preparation for the change in the terms of Antarctica’s other most significant environmental protection measure, the Protocol on Environmental Protection. The Protocol bans the exploration and exploitation of minerals in Antarctica and like the new Ross Sea MPA, has a clause allowing it to be renegotiated. The key date for this agreement is 2048, only three years before the Ross Sea MPA expires.

Brokering the Ross Sea Marine Protected Area can be taken as a legacy project for U.S. Secretary of State John Kerry, whose diplomacy played a crucial role in the lead up to the 2016 negotiations. But for those who would like to have protected the famed “Last Ocean,” it is a pyrrhic victory at best.

Anne-Marie Brady is Global Fellow at the Wilson Center, and author of China as a Polar Great Power (Cambridge University Press, 2017).

New Zealand is increasingly mobilizing resources to secure a share of the Southern continent.