On October 22, Reuters reported that the Taliban had filmed a suicide attack in Helmand, Afghanistan’s largest province, with a small drone. An aerial video showed the insurgents deploying a car bomb against a police station in Nawa-i-Barakzayi, a district near the provincial capital.

Within a few days of the Reuters article, the Taliban posted a followup statement on its Dari Telegram channel and WhatsApp chatroom, congratulating itself for the achievement of buying a remote-control vehicle and using it, even though rebels in the Middle East have been doing so for far longer. A photograph accompanying the statement showed the Phantom, an off-the-shelf drone manufactured by Chinese technology company Dajiang Innovations Science and Technology (DJI). 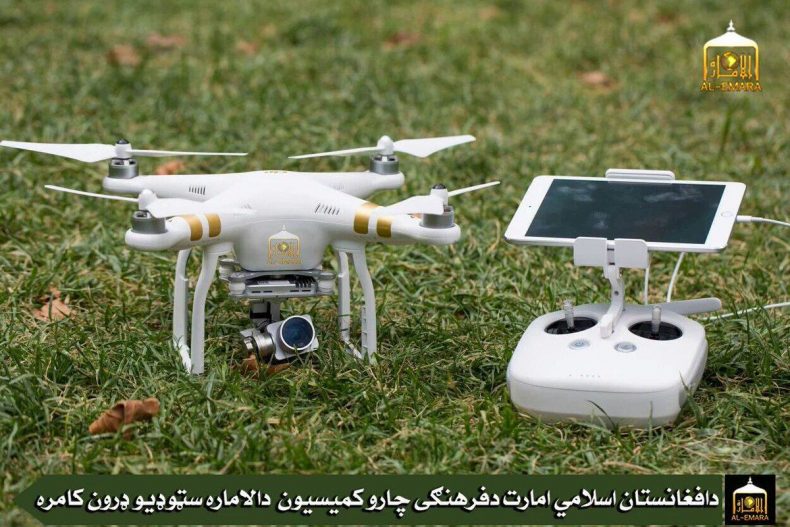 A photograph of a Phantom drone, which was posted to the Taliban’s social media accounts.

Afghan officials have been trying to downplay what the development could mean for the country’s insurgency. The Afghan government has banned the use of drones around military bases.

Though the recent video appears to be an exercise in propaganda, representing little threat to the soldiers stationed throughout Helmand and the rest of Afghanistan, the insurgents seem to have more threatening plans for their drones. A spokesperson for the Taliban claimed that they have had access to the technology for over 18 months. “It is very useful in discovering the enemy’s most important bases,” Zabihullah Mujahid, a Taliban spokesman, told The Diplomat. “The attack in Nawa was just one example. We have used it in other operations. We use this technology against the Americans and their servants in Afghanistan.”

In addition to propaganda, the Taliban can use the drones to coordinate fire support, deliver improvised explosive devices, and reconnoiter the battlefield. The Washington Post noted earlier this year that the Taliban have been increasing the size and strength of their bombs. Drones will expand their options for launching deadly ambushes and attacks against Afghan and Western soldiers.

The Islamic State (ISIS) has employed off-the-shelf drones in Iraq and Syria, where thousands of American advisers are aiding pro-Western militias and security forces. However, American soldiers are playing a far more hands-on role in the war in Afghanistan. This August, a roadside bomb killed one U.S. soldier in Helmand. At least six other American soldiers have died in Afghanistan this year.

“We are aware the Taliban is using drones,” said Adam Stump, a spokesperson for the U.S. Defense Department. A spokesperson for the Resolute Support Mission, the NATO-led coalition in Afghanistan, elaborated. “We have seen one example of Taliban drone use, but purchasing and operating a small drone is not very difficult or complex,” Brigadier General Charles Cleveland, deputy chief of staff for communication, told The Diplomat. “Regarding the impact this will have, we think there will be very little impact. If there is any impact, it will be in the form of propaganda in an effort to frighten the Afghan population. We will continue to support our Afghan partners.”

NATO’s Afghan allies have struggled to secure the countryside in the face of countrywide Taliban offensives. The insurgents have threatened to overrun Helmand and Kunduz several times this year. They have also made inroads in other provinces and pressured Afghanistan’s economy and infrastructure, blocking and mining already-perilous highways between provincial capitals.

Already, better technology is improving the Taliban’s capabilities. Anecdotal evidence and rumors suggest that the Taliban has started deploying its version of special operations forces, some armed with night vision devices that the Afghan policemen and soldiers whom they are fighting lack. Now that the insurgents have adopted technology capable of aerial photography and video, their advances on the battlefield and capabilities during night combat could portend another series of embarrassing losses for the Afghan government.

It should concern analysts of the war in Afghanistan that, as Cleveland observed, militants can obtain off-the-shelf drones across Asia with ease. Motherboard reported the growing popularity of drones, including DJI models, in Myanmar, Nepal, Pakistan, and the Philippines. In Iraq, Wired UK documented Iranian-backed militias and security forces using DJI drones during the Third Battle of Fallujah, where they guided artillery batteries and rocket launchers.

“The Taliban video is to my knowledge the first time the Afghan Taliban has employed this technology,” Dan Gettinger, co-director of the Center for the Study of the Drone at Bard College, told The Diplomat. “It is not, however, the first time that a terrorist or insurgent organization has used drones, nor will it be the last. […] It wouldn’t surprise me if more non-state actors started using drones, if only for reconnaissance missions or for making propaganda videos.”

A worst-case scenario would involve the Taliban trying to copy the Liberation Tigers of Tamil Eelam, the defunct Sri Lankan terrorist organization. Equipped with a clumsy but dangerous air force and navy, the Tamil Tigers masterminded a kamikaze attack that killed two in Colombo in 2009.

While the Air Tigers are no more, the Taliban has the experience to repeat their legacy. Before an American invasion toppled the Islamic Emirate of Afghanistan in 2001, the Taliban commanded a nascent air force, intercepting seven Russian airmen in 1995. Late Taliban leader Mullah Akhtar Mansour had administered that air force as well as Afghanistan’s flag carrier in the 1990s.

The Taliban would face obstacles in any attempt to recreate its extinct air force, among them the Afghan Armed Forces and Resolute Support’s obvious air supremacy. CIA combat drones have ruled the skies of Afghanistan and Pakistan for over a decade, and nothing in the Taliban’s arsenal — at least for now — can change that reality. However, drones are no longer in the sole possession of the American-led coalition and its Afghan allies. The Taliban will likely continue to employ them.

Instead of dismissing the insurgents’ recent video as another bizarre news article in the war in Afghanistan, Afghan and American soldiers should consider the dangerous potential of off-the-shelf drones and develop countermeasures lest the Taliban find yet another of its enemy’s weaknesses.

Austin Bodetti is a freelance journalist focusing on conflict in the Muslim world. His writing has appeared in AskMen, The Daily Beast, The Daily Dot, Vox, and Wired UK.

Hamidullah Barakzai is an Afghan activist, humanitarian, and writer from Lashkar Gah, the capital of Helmand.

Afghanistan’s Hazaras have long been persecuted and over the last 20 years targeted in attacks of increasingly cruelty.

Most Afghans will have difficulty recovering from a failed peace process in which they and their government have invested so much hope.

Fire From the Sky: The Afghan Taliban’s Drones

Violence Against Indian Muslims Must Be Urgently Investigated

There is enough evidence that some of these acts amount to crimes against humanity.

By Ahana Roy and Siddhant Nair

Kishida said it was important to gain people's trust and that the new Cabinet included only those who agreed to strictly review their ties to the Unification Church.