MAILUU-SUU, Kyrgyzstan — The remote town of Mailuu Suu in South Kyrgyzstan is known for a Soviet legacy that still haunts the local population of more than 22,000. Residents of Mailuu Suu commonly say that the very first Soviet atomic bomb was made out of locally extracted uranium in the late 1940s. The township is surrounded by uranium tailings and radioactive dumps that have been of greatest concern to the country’s neighbor, Uzbekistan, for decades.

The gravest dilemma for the Kyrgyz government is related to the frequent landslides in the areas along the river of Mailuu Suu where the Soviet government kept radioactive waste from the uranium mining. The glaciers of the southern Tian Shan feed this river, which flows directly to the neighboring republic of Uzbekistan in the Ferghana Valley.

Previously, an accident in April 1958 at the uranium tailing 7 led to the discharge of  “600,000 cubic meters [of radioactive material] into the river [of Mailuu Suu],” according to an OSCE report in 2005. The demise of the Soviet Union and poor maintenance of the uranium tailings since the 1990s has raised concerns in the region and abroad, ultimately bringing the World Bank’s attention to the challenging task of remediation in Mailuu Suu.

The World Bank has invested $11.76 million into the “Disaster Hazard Mitigation” project in Mailuu Suu, which was launched in 2004 and completed in 2012. The World Bank’s objective has been focused on minimizing “the exposure of humans, livestock, and fluvial flora and fauna to radionuclide’s associated with abandoned uranium mine tailings and waste rock dumps in the Mailuu-Suu area; and improvement of the effectiveness of emergency management and response by national and sub-national authorities and local communities to disaster situations.”

However, locals who are weary of impact from the uranium legacy believe health issues and birth anomalies persist in the area. “[There are] big problems in this town,” Minabar Umarova, chair of the Women’s Committee of Mailuu Suu, told The Diplomat.

“Our analysis in 2014 of health among local women and children in Mailuu Suu revealed that our town of 24,000 had 180 children [younger than 18] with disabilities. At the same time, the neighboring district of Suzak with more than 240,000 residents had only 165 disabled children. So, Suzak district, with the population ten times larger than Mailuu Suu, has less children with disabilities,” said Umarova.

Indeed, an “effect of radiation and radionuclides on public health in Mailuu Suu has reflected on higher rates of birth anomalies — 5.12 percent; miscarriages — 12.1 percent; stillbirth rate — 1.25 percent” than anywhere else in the country, according to research by the Institute of Medical Problems of the National Academy of Sciences, Kyrgyz Republic. The Institute’s previous field monitoring and observation in 2007 found the presence of radioactive uranium and thorium in women’s placentas in Mailuu Suu and surrounding villages.

Respectively, in the village of Sary Bae, background gamma radiation was recorded within 40 mR/h – 640 mR/h whereas in the neighboring city of Jalal Abad background radiation is 21 mR/h, according to official data. Sampling of the 15 local women’s placentas has shown the presence of uranium in the amount of 0.33 mg/kg ± 0,2 (p <0.05); and thorium in the amount of 0.25 mg / kg ± 0,1 (p <0.05). Uranium and thorium in women’s placenta was a cause for complications during pregnancy in 80 percent of the cases among observed women of Mailuu Suu. 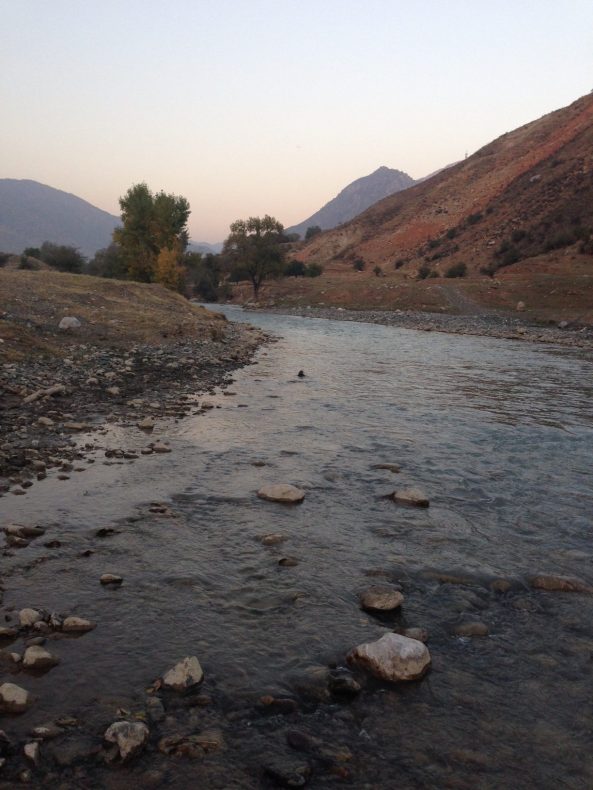 The Institute for Medical Studies’ research has concluded that snow melt and flash floods trigger frequent mudslides during the spring season in Mailuu Suu that in effect carry radionuclides from dumps and tailings to the local river. This finding was confirmed by the Switzerland based Spiez Laboratory that has conducted a field study in Mailuu Suu, last year. Swiss scientists also found “extremely high levels of uranium in drainage water from the tailings.”

The threat of radioactive contamination in Mailuu Suu and in downstream areas of the Fergana Valley has been actively discussed in the European Union. The EU was analyzing impact assessments while conducting feasibility studies in Kyrgyzstan. Last year, the European Commission initiated the creation of the “Environmental Remediation Account, a vehicle to channel international efforts towards finding long-lasting solutions to the severe environmental problems related to former uranium mining and milling activities” in Central Asia. EU has contributed €16.5 million ($17.5 million) to the fund, which is managed by the European Bank for Reconstruction and Development (EBRD) and already had its first assembly in July this year in London.

Vince Novak, EBRD director for nuclear safety, highlighted the significance of the remediation program in Central Asia (including Mailuu Suu) and said it is a “very important new initiative by the EC and the EBRD as it addresses one of the less-well known yet urgent remaining challenges from Soviet nuclear operations. However, the success of our new fund will depend on the commitment of partner countries and support from donors.”

Rakhman Toichuyev, director of the Institute for Medical Problems, told The Diplomat that in order to be effective, the EU-funded remediation project in Mailuu Suu could start with improvement of the township’s water supply infrastructure, which is one of the main concerns in Mailuu Suu and surrounding villages. Because of the difficulties with water supply, residents of the village of Kok Tash below Mailuu Suu use contaminated water from the river.

Ryskeldi Satke is a contributing writer with research institutions and news organizations in Central Asia, Turkey and the U.S.

The Art of Survival for Central Asian States

30 years on from the dissolution of the USSR, Central Asian states are a case study in hedging and balancing between global superpowers.

In total, around 365,000 Kyrgyz were mobilized by the Soviet Union to fight against Nazi Germany.

There Is No Such Thing as ASEAN Neutrality

Despite its claims to the contrary, the Southeast Asian bloc is intervening in Myanmar's crisis – just not effectively.