China’s 13th Five Year Plan on Energy Development (Energy 13FYP) might be one of the most anticipated energy blueprints in the world for its far-reaching implications for the carbon trajectory of the planet’s largest emitter.

On January 5, 2017, the National Energy Administration finally unveiled the plan to reporters, with a set of 2020 targets covering everything from total energy consumption to installed wind energy capacity. Before we delve into details of the plan, one thing is worth noting: with the Energy 13FYP, China might have once again raised ambitions for its low-carbon future, highlighting the urgency that this smog-ridden country attaches to moving away from fossil fuels.

What’s With All the FYPs?

In March, China unveiled its 13th Five Year Plan for Economic and Social Development (2016-2020), which contains a set of climate and energy related targets, including an energy consumption cap and a 15 percent goal for the share of non-fossil-based energy in the country’s primary energy mix. So what’s the connection between this plan and the Energy 13FYP?

If we consider this the “Master Plan” for all aspects of China’s development in the next five year period (2016-2020), then the Energy 13FYP is the breakdown of that Master Plan for the energy sector, with more detailed targets to better guide policymaking, government spending and project planning in the sector.

What’s in the Energy 13FYP?

The table below illustrates the numerous 2020 targets already announced by the Chinese government in its Strategic Energy Action Plan (2014-2020) and its national 13th Five-Year Plan. They are cross-referenced with actual levels at the end of 2015. Comparing these to the latest targets is a way of gauging changes to the scale of ambition. 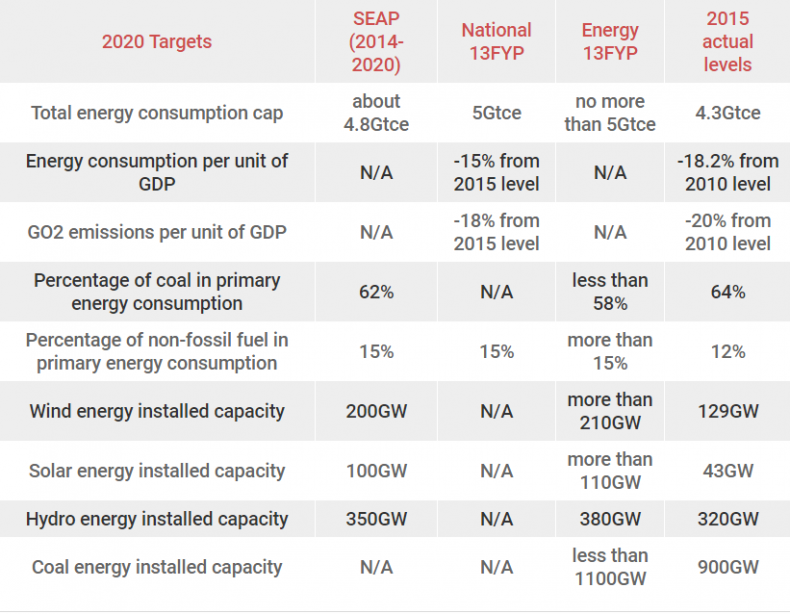 From this comparison, it appears that most of the Energy 13FYP targets are not entirely “new.” Many are in line with the existing thinking of previous announcements, in particular the Strategic Energy Action Plan (2014-2020), which, at the time of its publication was already considered ambitious in curbing coal consumption and CO2 emissions beyond international expectations.

However, this time around, policymakers seem even more determined to squeeze out coal’s share in the country’s energy mix, lowering its 2020 percentage in primary energy consumption from 62 percent to 58percent.

The country is also aiming higher for renewables: installed capacity of wind energy and solar energy should reach “more than 210GW” and “more than 110GW,” respectively, by 2020; higher than what was declared at the end of 2014.

With a quick look back at the progress of China’s energy targets since the 2009 Copenhagen climate summit, it is clear that:

Set against the background of other major emitters, particularly the United States’ potential backtracking from its climate commitments, China’s continued strengthening of its own targets looks even more remarkable.

But ambitious targets do not necessarily translate into results. To achieve these goals in less than five years, China would have to overcome chronic problems in its energy sector. Media reports about the Energy 13FYP reveal deep-rooted concerns that have troubled Chinese policymakers.

China’s power sector is faced with a severe overcapacity problem. Slowing demand for electricity due to the economic downturn and the slashing of energy intensive industries has caused widespread under-utilization of existing power generation capacities, which are seeing their lowest utilization hours since 1978.

Yet the country is still seeing a fast build-up of coal-fired power capacity as a result of inertia (many projects were approved in the heyday of the economic boom), and perverse incentives (dropping coal prices and a government fixed electricity tariff is increasing the profit margin for coal power).

The situation has prompted regulators to consider putting a two-year “freeze period” in the Energy 13FYP for the approval of any new coal-fired power projects. At the press conference to launch the Energy 13FYP, government vowed to keep coal power capacity below 1,100 GW by 2020, setting an upper limit for new coal capacity.

The other side of the overcapacity coin is curtailment of renewable energy, particularly wind and solar energy in western parts of the country.

A combination of transmission bottlenecks and market set-up has prevented large chunks of renewable electricity from reaching the grid. In 2015, 15 percent of China’s wind energy was wasted, a record high. Based on the Energy 13FYP, the problem seems to have pressed policymakers to put more emphasis on reining in curtailment, as opposed to further expansion of installed capacity. It has also prompted them to plan more new renewable electricity capacity in China’s eastern regions, where electricity demand is concentrated, reducing the need to transmit renewable energy across the country.

Ma Tianjie is chinadialogue managing editor in Beijing. Before joining China Dialogue, he was Greenpeace’s Program Director for Mainland China.

China's energy use will have enormous consequences for the world. Here's what we know about its latest plans.

Xi has made big promises on China's emissions and energy mix, but his work report at the 20th Party Congress suggests neither is a top priority.