KARAGANDA, KAZAKHSTAN — Rusting industrial detritus dots the near-endless horizon around Karaganda, as the coal mining industry for which the city became famous during the Soviet Union slowly shutters and crumbles. Once the third largest producer of coal in the USSR behind Russia and Ukraine, Karaganda’s vast mine complex was only possible with the blood, sweat, and tears of the equally vast system of prison camps, known collectively as the Karaganda Corrective Labor Camp, or KarLag. Between 1931 and 1959, over one million prisoners are estimated to have passed through the camps.

They were brought to KarLag by train, packed into boxcars. Most had been charged as “enemies of the workers” under Article 58 of the Soviet Penal Code, and as such included scientists, doctors, artists, political figures, and authors.

“Some people escaped, but most did not try. Where were they going to go? They had no normal clothes, no identification papers, and there was nowhere around where they could hide,” explained Aliya, a guide at the Dolinka Museum for the Commemoration of Victims of Political Repression, a national museum in Dolinka village (population 5,000) that is dedicated to educating locals and visitors alike about KarLag.

“At some 300,000 square miles, KarLag was the same size as France,” Aliya noted, pointing to a map showing the numerous sub-camps dotted south of the administration building. (The comparison to France is often used by guides but may be an exaggeration.) KarLag was so powerful that it operated outside of the jurisdiction of local or national authorities, answering only to Moscow. 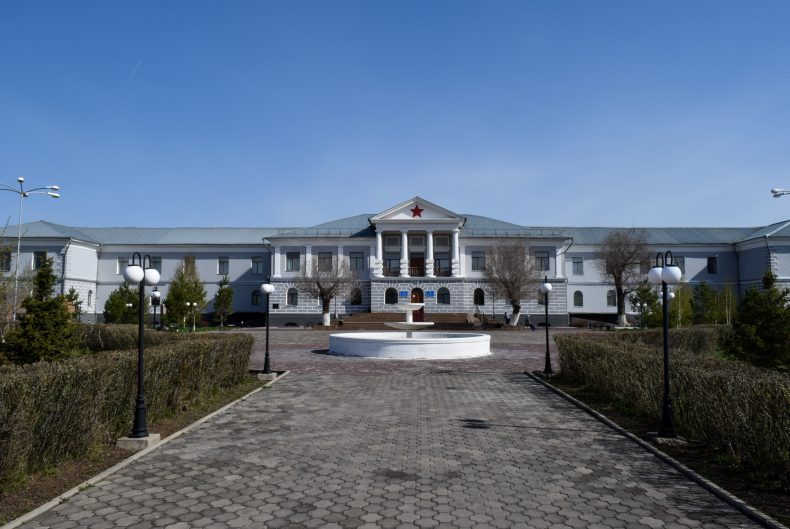 The museum, housed in the former administrative building, is an impressive building. Photo by Peter Ford.

The museum is housed in the grandiose white and grey building adorned with a large red Soviet star that used to house the camp’s administrative apparatus. In the middle of the village of modest bungalows — and somewhat incongruently a modern prison as well — the building still serves as an impressive reminder of the power Moscow wielded across the USSR. It was in this building that prisoners were processed, interrogated, distributed to outlying camps, given work orders and in many cases subsequently worked to death.

“We don’t know much information about the prisoners, such as the number of women, or how many died, as the records are still secret. After independence [in 1991], many documents disappeared,” Aliya explained. That means a number of the dioramas and exhibits being based on survivor testimony, rather than official documents.

The museum was able to find prison records for January 1959, the year it closed, that show 16,957 prisoners incarcerated across KarLag, a noticeable drop from the high of 65,673 recorded in January 1949. At the closure of the camp, prisoners were either released or transferred to serve the remainder of their time. Those who chose to remain have all now passed away, Aliya noted, and their descendants, if non-Kazakh, likely returned post-1991 to the countries from which their forbears were deported.

The Dolinka museum receives a score of 7 out of 10 on dark-tourism.com’s “darkometer” scale — Auschwitz and Hiroshima score 10, while Argentina’s ESMA building, the site of torture and execution under during the “dirty war,” is a fellow 7.*

“This costly development clearly shows a perceived need to commodify the KarLag history. And the new exhibition does so with panache! It may attract criticism for putting just a little too over-emotional an emphasis on Kazakh victimhood and for including a not altogether fitting patriotic celebration of independent Kazakhstan,” the website states, nevertheless calling it “an absolute must-see.” 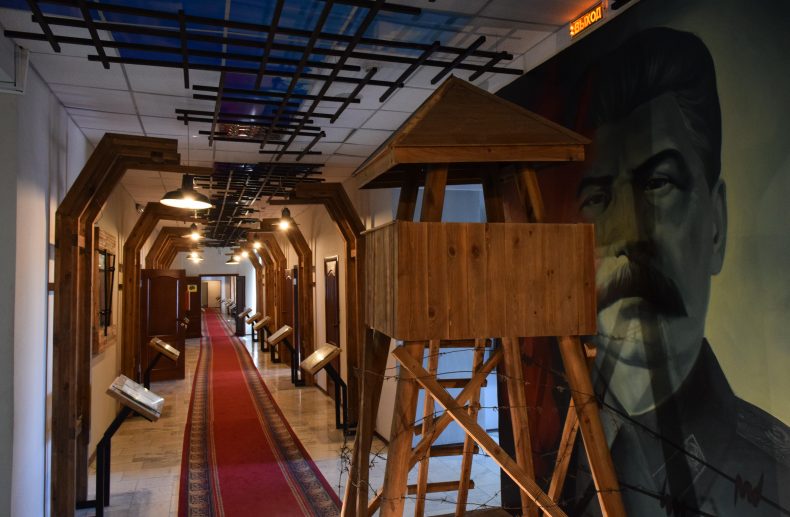 Visitors to the museum are greeted by this model guard tower, and the looming face of Joseph Stalin. Photo by Peter Ford.

Rather than seeking to bury this part of the country’s dark history, Kazakhstani authorities are instead promoting the site and others like it for the role they played in the country’s history.

The message, at least in Dolinka, is however confused by both praise and criticism of parts of this history.

Following the closure of the KarLag camp, the museum building was used as a school, hospital, and sanitorium before being abandoned and allowed to fall into disrepair. Restored to its present glory by the government between 2007 and 2011, the museum is set over three floors and features an impressive array of videos, dioramas, pictures, and information boards. Sections include the horrors of the famine that ravaged Kazakhstan between 1919 and 1922 that killed some 500,000 people. The famine, along with the violent crushing of anti-Soviet rebellions, is described as being “as terrible as the most terrible offenses against mankind” on an English sign. Relating to KarLag, the forced removal of the 1,507 recorded children from female prisoners, “the children of national betrayers” as they were termed, and a number of rooms in basement depicting the torture and cruel punishments reported by survivors point to the severe cruelty directed at the prisoners.

At odds with this negative portrayal of Kazakhstan’s treatment under the Soviet Union, sits information praising the scientific and agricultural successes achieved in the camps by their prison populations, including some of the USSR’s leading intellectuals. Aliya, the guide, proudly rattled off facts concerning the work of such camp luminaries as Nobel Prize nominee Alexander Chizhevsky, the cultural events the prisoners performed each year, and the artworks they were allowed to produce — but not sign.

“Most [prisoners] were innocent, but it was a time when people complained and spied on each other,” Aliya noted, before highlighting how KarLag had fulfilled post-World War II quotas for grain, vegetables, and potatoes by 118.8 percent, 102 percent, and 107 percent respectively. Whether this was due to the scientific prowess of the prisoners, or the captive workforce was not mentioned. 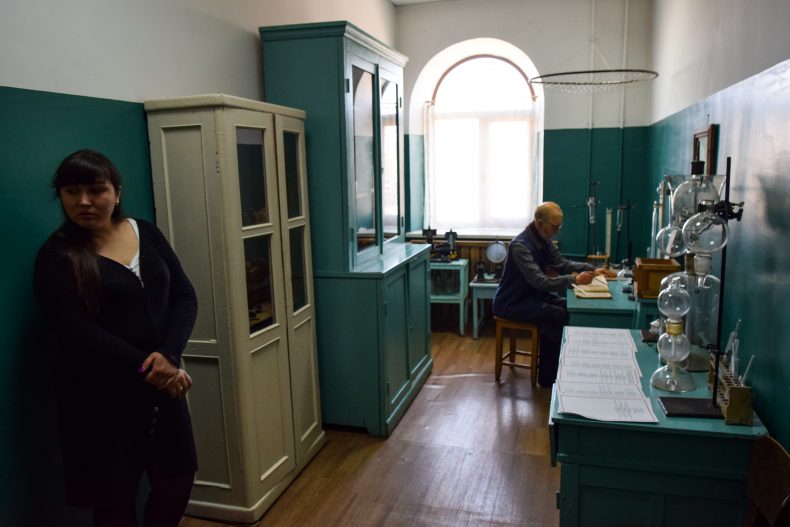 Museums allow authorities to direct the discourse of events as they wish. Just as the Peace Memorial Museum in Hiroshima brushes over the actions of the Japanese military prior to the devastating bomb being dropped, or the British Museum is mute on how exactly it obtained all of its artifacts, the KarLag museum appears to give credit to the gulag system for housing and supporting the work of those detained in the prison camps, while at the same time demonizing the same system that made it possible.

One Kazakhstani visitor, who asked not to be named, maintained that both criticism and praise of the gulag system could exist together.

“It is good to show that such experts were brought to Kazakhstan and helped the country,” she stressed, as a group of local high school children were ushered past. That the torture and abuse of the prisoners was also on display did not lesson the scientific achievements.

The museum is not just for domestic audiences of course. According to Aliya, most visitors are foreign tourists.

Askar S. Mukashev and Dana M. Ussenova, in a short academic paper on the viability of dark tourism in Kazakhstan, describe the country as “one of the most exciting and undiscovered dark tourism destinations in the world.”

“Taking into account the novelty of this type of tourism, Kazakhstan has to take its own share in the world dark tourism destination,” the authors conclude. 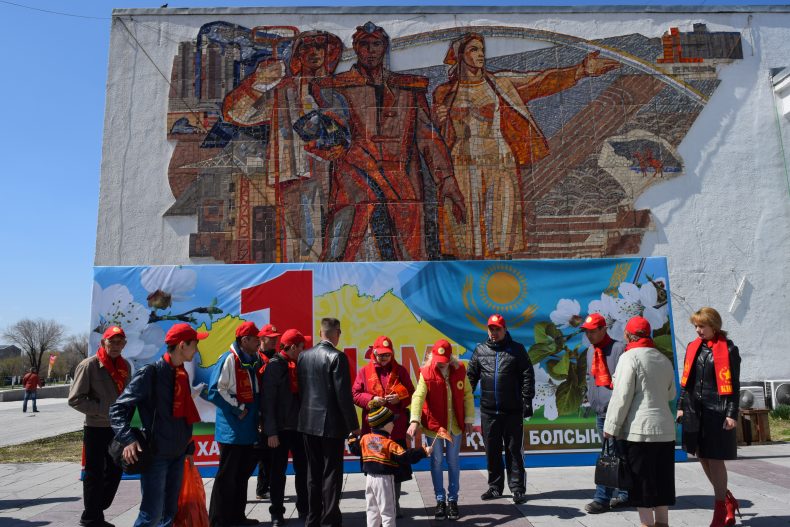 Members of the Kazakhstan Community Party at a rally beneath a Soviet-era mural in Karaganda. Photo by Peter Ford.

And the country certainly has more than its share of such sites.

In addition to KarLag, notable sites include the Semipalatinsk Nuclear Test Site where more than 450 nuclear bomb tests were conducted above ground, the ALZHIR gulag in Akmola oblast, which housed the wives of men convicted under Article 58, and the grounded former fishing fleet of what is left of the Aral sea.

For Dr. Peter Hohenhaus, the man behind dark-tourism.com, such sites are interesting for their historical and educational value.

“[T]he sheer unusualness/off-the-beaten-track nature of most of DT [dark tourism] that makes it exciting, at times even adventurous,” he wrote in an email.

The attraction of the darker side of history is as old as tourism itself. From battlefield spectators during the American Civil War, to those flocking to join $100 Chernobyl bus tours, sites that offer something different from the standard cathedral/market/statue tourist attractions are popular.

For some cities, such as Phnom Penh, Nagasaki, and Karaganda, their dark sites are what they are mostly famous for — and are the primary tourist draw.

As Kazakhstan, under the direction of perennial leader Nursultan Nazarbayev, makes continued strides to boost tourism through large international events like the 2011 Asian Winter Games, and the upcoming Expo, it is promising that it is choosing to highlight rather than hide some of its darker history. Deciding on a clear message for how the country’s Soviet past is presented to citizens and tourists alike will be a more difficult affair.

*A previous version of this article misidentified the ESMA museum in Argentina.

Peter Ford is a freelance journalist based in Phnom Penh, Cambodia. He tweets @Peteaford. Additional reporting for this story by Samal Alpysbayeva.

What Do Kazakhs Think of Borat?

By Assem Almukhanbetkyzy and Kristi Eaton

With a new film, the satirical character is back in the headlines – and so is Kazakhstan, his supposed home.

What’s Next for Russians Who Fled to Kazakhstan?

In the early 1990s, ethnic Russians left Kazakhstan in droves. In 2022, that flow once again reversed as Russians fled into Central Asia.

By Assem Almukhanbetkyzy and Kristi Eaton

As has been observed elsewhere in the world, quarantines in response to the COVID-19 pandemic have led to a spike in domestic violence incidents.