Around the world, Everest is probably the most widely used keyword associated with Nepal. The making and breaking of records on the world’s tallest mountain, the historical and cultural glory of Sherpas, and the multidimensional aspect of the mountaineering industry — all of these successfully attract a global audience.

Everest, however, does not always mean good stories. Tragic accidents and horrifying reports about the deaths of mountaineers are an inevitable, unfortunate aspect one has to be prepared to absorb each year. And with the growing number of climbers, accidents are unavoidable.

Over 800 climbers, including Sherpas, are waiting for the window to climb Everest this season. The government of Nepal has issued climbing permits to 373 climbers, the most since 1953 in a single season.

Given that there aren’t many parameters for issuing a climbing license, it has become a herculean task for the government to vet the strength and caliber of people wanting to conquer Everest. Western companies, generally, ask for a climbing resume. But with the influx of a number of Nepali agencies running Everest expeditions without properly checking credentials, some would-be Everest climbers have not ever done a decent trek in their life, nor are they fit.

In 2012, inexperienced mountaineer Shriya Shah-Klorfine paid one of these Nepali start-ups to take her up Everest. She had two to three Sherpas along with her, helping her reach the top. But she ended up dying due to cardiac arrest.

Is it really possible for a Sherpa to literally push someone up to the summit? It’s technically doable, which is why so many companies advertise the possibility. But only the climber knows what’s going on inside their body; all the pulling and pushing in the world won’t help save someone not getting enough oxygen.

Yet with companies using catchy tag lines like “If you can walk, we will take you to the top” Everest is slowly and gradually morphing from the exclusive realm of serious climbers into a general tourist spot — and, for companies, a money machine. “This is not alpinism, this is tourism. People are buying the possibility to go up the piste on Everest,” as legendary climber Reinhold Messner put it in a recent interview with The Diplomat.

For an increasing number of Chinese and Indian climbers, where economy is on a boom, spending around $20,000 to ascend Everest isn’t much. Among the foreigners seeking to climb Everest, Americans, Indian, and Chinese topped the list this year.

And if this continues, Everest will soon lose its value.

No matter what companies might want, natural conditions ensure only a limited number of climbers can scale Everest each year. Every season has about three or four good weather windows that allow a safe summit climb.

Sometime in mid-May, the jet-stream moves a little north and the winds subside to about 20-30 kilometers an hour, which provides a window of opportunity. Otherwise, throughout the year the summit of Everest is pummeled by windspeeds as high as 200 km/hr.  Decisions are made by talking to the Sherpas and other teams, and factoring in climbers’ “gut feelings.”

Most climbers find a safe passage time by checking at least two weather reports; less wind and less snowfall are the two most important factors. Climbers can look at two weather reports and compare earlier predictions to the actual weather. The forecaster with the better record generally is used in planning. If it’s 50-50, climbers will figure out the days that both companies predict the weather would be good.

In the earlier weather windows, many try to go on despite risky conditions because there is a good chance the window will close. It takes five days to reach the top from base camp, so planning and decisions have to be made at least a week ahead of the final climb. There are times when a big cyclone may come from the Bay of Bangal and disturb the whole predicted weather pattern.

In the end, a lot depends on luck. 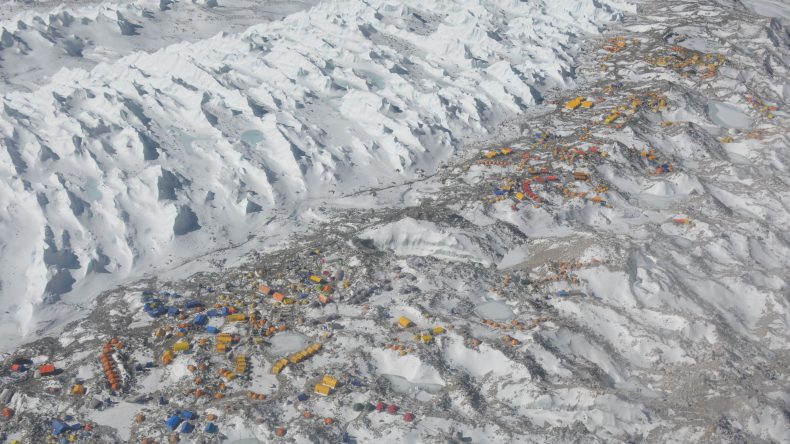 Everest Base Camp, viewed from above. Photo by Pradeep Bashyal.

Before the final push, climbers stay in a tent city known as Everest Base Camp (EBC) spread out over around 3 kilometers at around 5,300 meters of altitude. After a week-long trek from Lukla, the closest airport in operation, climbers stay in the base camp for at least one month to acclimatize themselves to the altitude. During that stay, they will make a few rotations to higher camps.

Bigger teams do just two rotations. First they climb Lobuche East, which lies in Khumbu glacier at an altitude of 6,119 meters. The second rotation happens normally in Khumbu Icefall. Climbers go to Camp 1, touch Camp 2, and come back to Camp 1 to spend the night before moving to Camp 3. They spend one more night at Camp 3 before descending to the base camp.

Recently, some groups have chosen to do one rotation in Kalapathatter, the notable landmark on the south ridge of Pumori mountain at 5,644 meters, another in Pumori high camp, and one on the lower part of the icefall, staying in Camp 1 and Camp 2. Climbers who select Pumori generally think the constant up-down climbs in the Khumbu Icefall are too risky. 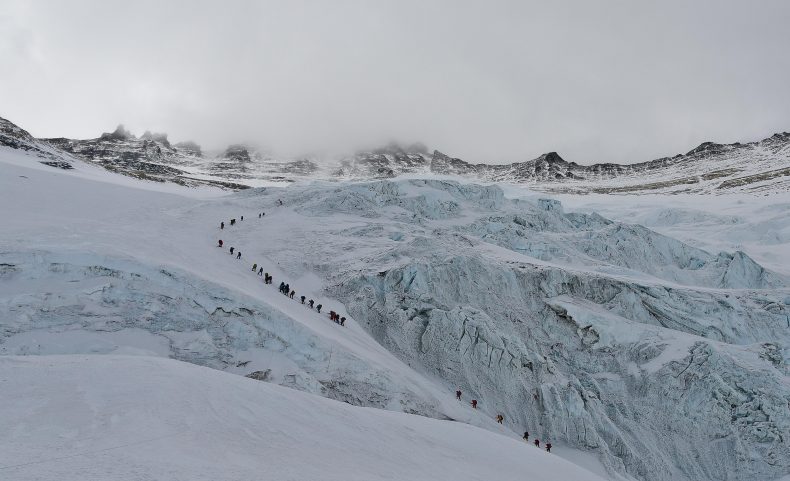 The upper mountain is steep and treacherous. This often results of “traffic jams” on the ascent, because the limited weather window forces all teams to go for the climb on the same date. With so many inexperienced climbers, it makes the problem worse

The traffic problem lies mostly above Camp 3, on Lhotse face, and then above Camp 4 — the summit route. It’s especially prominent at Hillary Step. The route to the step, called the Cornice Traverse, is one-way path where only one climber can walk at a time.


Hillary Step is a 12-meter vertical rock face. For a strong and fit climber, it shouldn’t take more than 10 minutes to cross, but many inexperienced climbers take 15 to 20 minutes. With every person taking roughly 10 minutes and over 300 to 400 people waiting to climb, lots of people simply have to turn around and go home.

Waiting to make the climb means two things. One, a climber’s oxygen is running out. Two, climbers standing still begin to literally freeze. Walking above the South Col, it’s common to encounter temperatures of -35 degree Celsius at night, with 30 to 35 km/hr winds. If a climber has to wait for just five or six minutes, the whole body becomes cold — climbers cannot feel their limbs. The mind doesn’t work properly under those conditions and the body is dying.

Overtaking a slower climber happens, but it’s not a rational choice. To pass someone on this 60 degree wall, a climber has to get out of the rope by unclipping his of her lock. If they slip at that point, they will fall and death is guaranteed. But with Hillary Step only some meters beneath the summit, many don’t want to turn back and take their chances.

Seven climbers died last year, including several acclaimed climbers with a lot of experience, such as Australian Maria Strydom, who had climbed six summits from six different continents.

However, the Sherpa guides will have to do multiple climbs through the icefall and there tends to be Sherpa traffic jams there. In 2014, a deadly avalanche killed 13 Sherpas because there was overcrowding at a certain location due to a broken ladder, leading to a traffic jam. 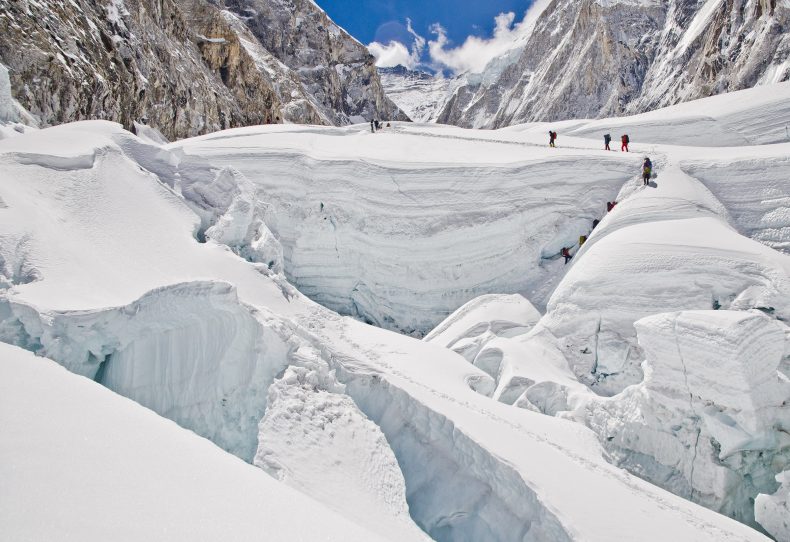 Nepal government could solve some of the traffic issues, save lives, and earn money if it were to make it mandatory for climbers to ascend either two 6,000 meter summits or one 7,000 meter summit in Nepal before initiating an Everest climb. This would be a boon to the mountaineering industry of the country as well as weeding out inexperienced climbers. Such preventative measures will help reduce deaths on the summit, and will also give Nepal a reputation for efficiently regulating climbing.

There will never be another Everest. And Nepal should make sure the alpine community does not lose its respect for the world’s highest mountain, even while the country profits from the Everest industry.

Pradeep Bashyal is a Kathmandu-based journalist who covers mountaineering for Nepal Magazine. He has also reported for international publications like The Washington Post and Buzzfeed News. He tweets @pdpbasyal.

A look at changing mountain livelihoods in Nepal.

Following the deadly avalanche, Sherpa porters and guides have understandably had enough.

By Roshan Sedhai and Samik Kharel

Far from demanding accountability from Qatar, South Asian governments have often been mute spectators to the plight of workers and their families at home.

How can Nepal compete with larger migrant-sending states like India without jeopardizing the wellbeing of its workers?