After studies revealed that the “numbers of whale sharks (Rhincodon typus), the world’s largest living fish, have more than halved over the last 75 years,” in 2016 the International Union for Conservation of Nature IUCN Red List of endangered creatures listed the whale shark as an endangered animal, “as these slow-moving sharks continue to be fished and killed by ship propellers.” 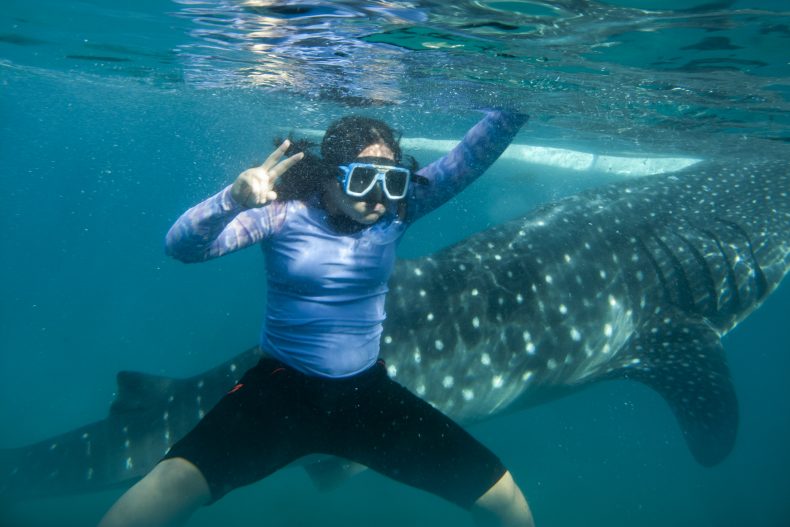 A tourist free dives for a photo with a whale shark in the background at Tan-awan whale shark touristic interaction hot spot in the Philippines. For around $20, tourists can spend 30 minutes in the water with the sharks. Photo: Alexandra Radu

The Philippines, in 1998, was one of the first countries to adopt protective legislation toward the whale shark. By banning the fishing of the whale sharks and punishing illegal fishing, Philippines shifted towards eco-tourism, and the fishermen became tour guides. The country holds some of the best places in the world to watch whale sharks, including Donsol, named the “Whale Shark Capital of the World.”

The whale shark ended up being a gold mine for the country’s tourism industry, and is even featured on national banknotes.

Unfortunately, as in most cases where mass tourism is present, not all is bright in the lives of Philippine whale sharks. 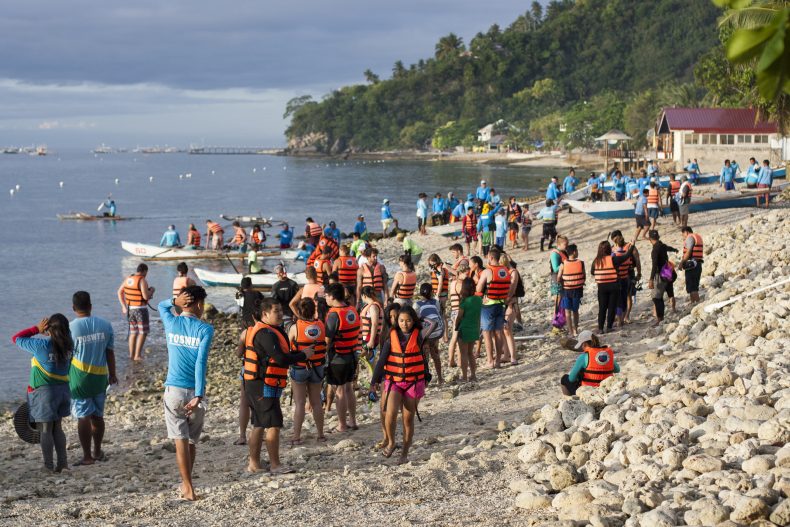 Early in the morning, crowds of tourists wait to embark on the whale shark watching tour after a five-minute safety orientation training. Photo: Alexandra Radu

A more recent hot spot for whale shark watching, Tan-awan, close to Oslob town on the island of Cebu, has transformed dramatically in the five years since the whale shark business opened. It changed from a tiny, quiet fishermen’s village to a crowded place with dozens of resorts that receive around 500 to 1,000 tourists per day. 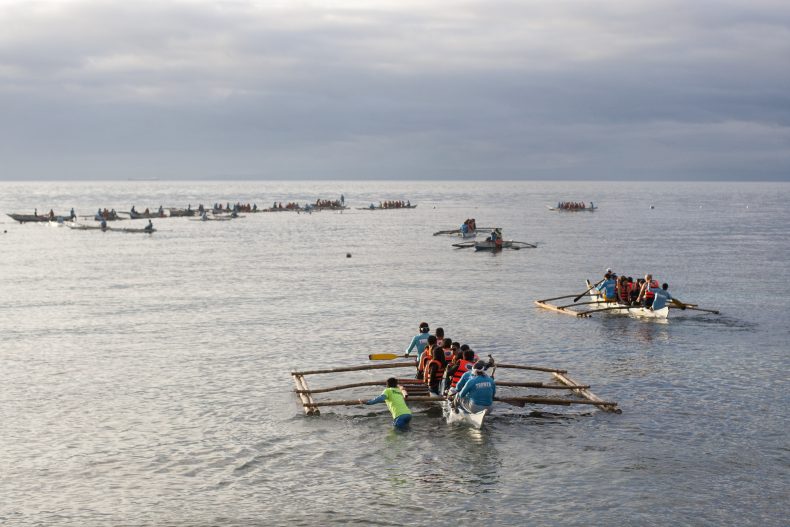 The activity at Tan-awan starts at 6:00 am and continues until noon. 500 to 1000 tourists swim with the whale sharks every day. Photo Alexandra Radu

Unlike Donsol, where the whale sharks are observed by tourists after being spotted in the water by guides, the locals in Oslob made the business more “lucrative” by luring the whale sharks in every morning, feeding them on zooplankton (animal microorganisms) which are their staple food. For an average fee of $20, tourists can spend half an hour in the water swimming with the whale sharks. “The business was born in 2011,” recalls Tirso, who works at one of the main resorts in Tan-awam, “when a Korean diver, who fed the resident sharks to lure them, gave the local fishermen the idea.” 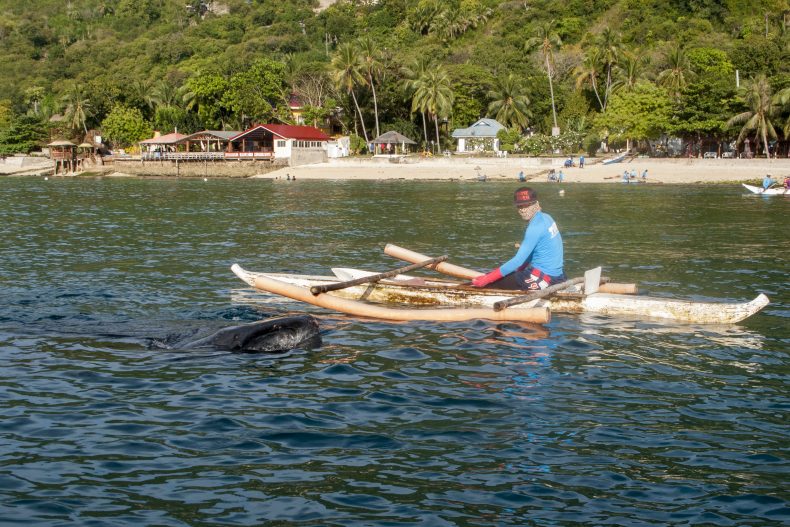 “From the beginning, the whale shark watching in Tan-awan was shaped as a business. While in Donsol we thought about protecting the sharks, in Oslob they are thinking about money,” explains AA Yaptinchay, chief of Marine Wildlife Watch Philippines, who participated in shaping the tourist-whale shark interaction site at Donsol in 1998. 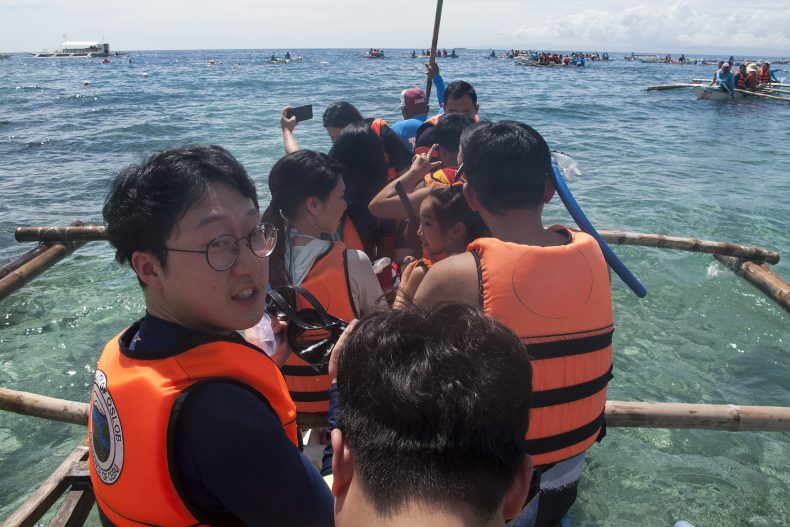 The whale shark is a docile creature but the long-going feeding in Tan-awan has created habitual changes in the shark’s behavior. Sharks show anticipatory behavior at the arrival of the feeding boats, becoming more reactive the longer they reside in the area. 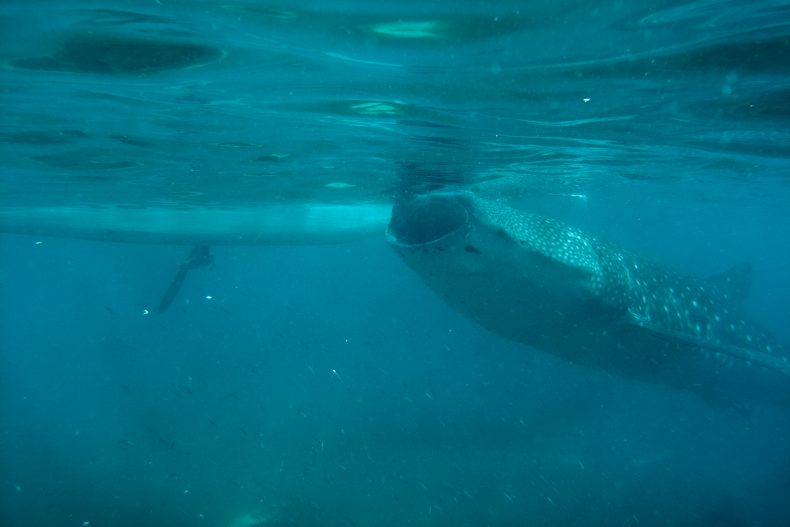 A whale shark and other small fish feed near a feeding boat at Tan-awan. The ongoing feeding process influences the entire marine coastal ecosystem of Tan-awan, polluting the water with an excess of nutrients. Photo: Alexandra Radu

“Normally, whale sharks are constantly moving from shallow waters to deep waters.” explains  Yaptinchay of MWWP. “In Oslob they spend half a day in shallow waters, then move for the other half a day to deep waters. This change in movement habits is an issue itself, causing a rise in the stress levels. Staying too long at the surface will heat the whale sharks and increase their stress levels. As we are talking about wild animals, stress can affect survival itself by changing the way they use their daily energy. Changes in physiology, growth, immune system levels, general health, and reproduction are associated with elevated levels of stress in the whale sharks.” 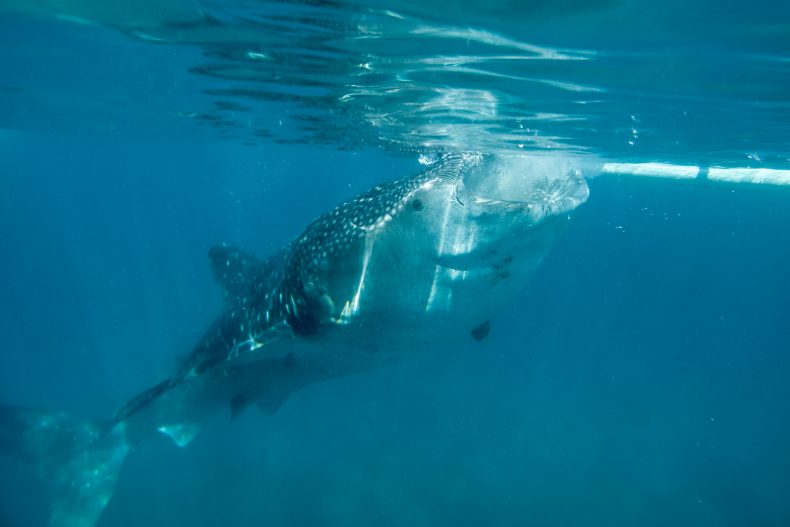 The interaction spot is a small area located around 100 meters from the shore. The water is shallow and the massive whale sharks that follow the feeding boats for hours are prone to overheating. Photo: Alexandra Radu

By developing a familiarity with boats and associating them with food, the sharks become more vulnerable to dangerous encounters with propeller boats outside the Tan-awan waters, which can result in injuries or even fatalities. Even though propeller boats are banned in the tourist and whale shark contact area, and the local boatmen use only paddle boats to transport the tourists, propeller scars were observed in 47 percent of the population in Oslob. 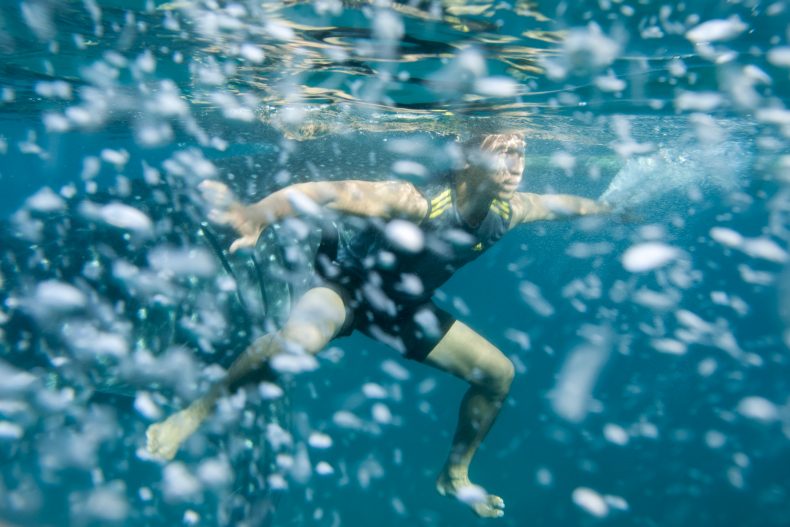 A tourist free dives to take a photo with a whale shark in the background. The tour guides encourage the tourists to dive for a few seconds and take a photo by signaling whenever a shark will pass by. Mostly the focus is on taking selfies. Photo: Alexandra Radu

Whale sharks are migratory animals, rarely residing in one area more than 30 days. The resident whale sharks in Oslob spend on average 44.9 days in the area, with a maximum residency of 572 days for one individual. The effects of this change in the migratory activity of the sharks is still a subject of research for the marine biologists. “We can expect the whale shark to move short distances (approximately 20 km) – in search for food – and have a seasonal migration also. They also do deep water migration, in search for food and to balance their temperature. All these types of movements are affected by tourism in Oslob,” says Yaptinchay. 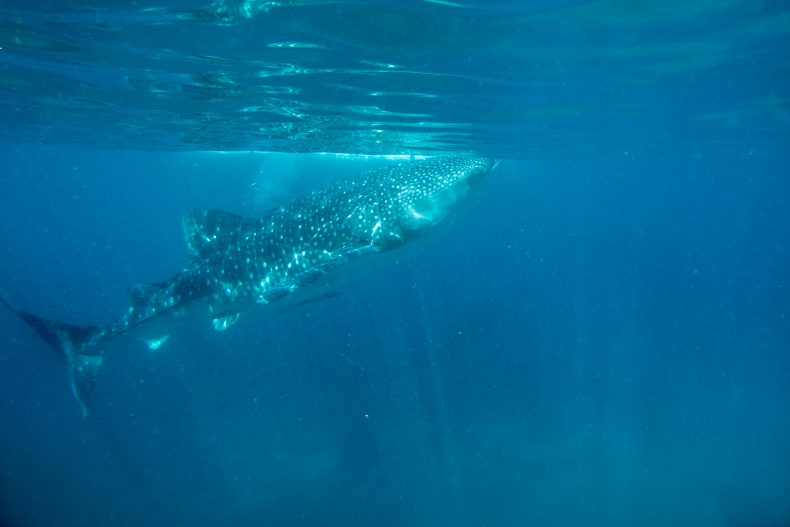 A whale shark feeds near a feeding boat in the shallow waters at Tan-awan. Photo: Alexandra Radu

The highly lucrative whale shark watching business in Oslob has boosted the local economy, allowing former fishermen to earn around 1,500 pesos ($30) per day, more than ten times their daily earnings from before they switched to guiding tourists. Dozens of resorts and restaurants opened to accommodate the hordes of tourists that descend on the tiny town every day. Marcelo, a former fisherman turned guide, says that his family’s life is much better now than before, when the only activity was fishing. He is sending his children to university with the money earned from the whale shark tourism. 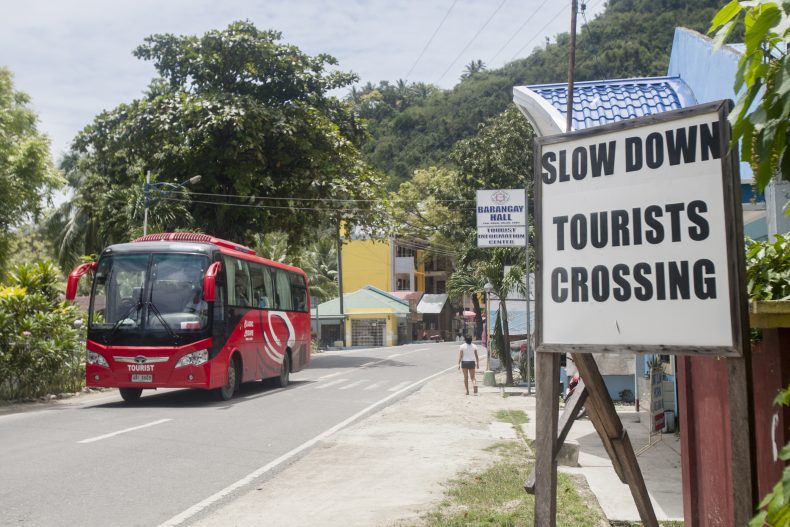 A sign close to Tan-awan beach warns passing drivers to slow down, as a measure of protection for the tourists going in and out of the resorts scattered along the road. Photo: Alexandra Radu

“This is a challenge of balancing conservation with economic growth,” explains Yaptinchay. “Unfortunately the local authorities don’t care about the well being of the sharks and the local community and tourists are not aware of the dangers of such a practice. It is a problem of awareness and education of the local communities and tourists but also of creating national laws regulating the whale shark tourism.” 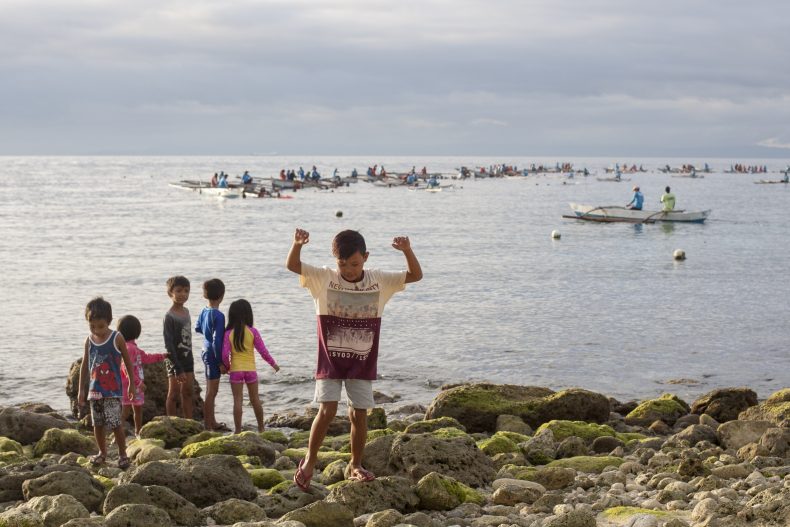 In October 2017, the 12th Session of the Conference of the Parties to the Convention on the Conservation of Migratory Species of Wild Animals (CMS COP12) will be held in Manila, the first time that the COP will ever have been held in Asia.

At the same time, the Philippine government is developing a “joint administrative order that regulates marine wildlife tourism interactions in the Philippines.” The law project is still pending approval by the government.

These initiatives bring hope for standardized interactions, enforcement of the no-feeding policy throughout the country, and a switch to more sustainable eco-tourism in places like Tan-awan.

Alexandra Radu is a photojournalist based in Kuala Lumpur. Her portfolio is available here.

By Sylvain Ourbis and Albert Shaw

Taking a closer look at a sultan's grand $100-billion megaproject in Johor.

Frustration is growing two weeks after a devastating typhoon struck the Philippines, with government assistance slow to reach the affected areas.

Philippine Jeepneys Won’t Go Down Without a Fight

Drivers have pushed back against a forced modernization scheme which the government says is needed to bring the iconic vehicles up to modern standards.