In early June 2017, Russian media reported that yet another Ground Forces missile brigade received the dreaded road-mobile 9K720 Iskander-M missile system (known in Russian military parlance as an “operational-tactical missile system,” or OTRK in short). The brigade in question is the 29th Army’s newly established 3rd Missile Brigade, based in Russia’s colossal Eastern Military District (MD). Formed in December 2016, this brigade was initially armed with the aging 9K79-1 Tochka-U tactical ballistic missile system, and became the Eastern MD’s fourth missile brigade to be re-equipped with the Iskander-M as part of the Russian Defense Ministry’s plan to phase out all Tochka-Us by 2020. The district’s three other brigades — the 107th, 103rd and 20th — received their Iskander-M OTRKs in 2013, 2015, and 2016, respectively. As a result, there are presently more Iskander-M brigades in the Eastern MD than any other district; Russia’s other three military districts (Central, Southern, and Western) currently house two Iskander-M brigades each. What, then, is the purpose of these four brigades?

Whereas the task of Iskander-M OTRKs being deployed in Russia’s Western MD is to hold U.S. and allied forces in the Baltics and Poland at risk, the systems stationed in the Eastern MD appear to primarily serve a different purpose: strengthening both Russia’s conventional and nuclear deterrence against China. Indeed, while an Iskander-M system stationed in Russia’s Kaliningrad Oblast allows Russia to target a wide range of NATO military assets, including the Aegis Ashore ballistic missile defense (BMD) system in Poland, an Iskander-M stationed in Russia’s Far East has very limited ability to threaten U.S. forces deployed in the region.

According to Russian sources, the Iskander-M’s 9M723-series of quasi-ballistic missiles have a range of 400-500 kilometers (250-310 miles), while the 9M728/R-500 ground-launched cruise missile (GLCM) — frequently erroneously referred to as the Iskander-K — possesses a range of under 500 km. This largely restricts the Iskander-M to targets on Japan’s Hokkaido Prefecture, leaving key U.S. military assets, including the AN/TPY-2 BMD radar in Japan’s Amoroi Prefecture and the Terminal High Altitude Area Defense (THAAD) system in South Korea, beyond the system’s reach. A possible exception is Misawa Air Base in the east of Aomori Prefecture; however, targeting this facility would require deploying the Iskander-M to the southern tip of Kunashir Island in the Kurils.

In this regard, the Kremlin no longer permanently bases missile brigades within close proximity to Japan as it did during the Cold War (the USSR maintained a missile brigade on the southern section of Sakhalin Island in Yuzhno-Sakhalinsk). The two Iskander-M brigades in Russia’s Far East — the 107th and 20th — are based in the Jewish Autonomous Oblast and Primorsky Krai, respectively. Both of these regions border China. The latter region also encompasses Russia’s 17 km (10.5 mile) land border with North Korea, suggesting that the primary purpose of the two far eastern brigades is containing China and responding to contingencies on the Korean Peninsula.

At the same time, the basing locations of the Eastern MD’s other two Iskander-M brigades likewise point to a focus on China; the 103rd Missile Brigade is stationed in Russia’s Republic of Buryatia, which borders Mongolia, while the newly formed 3rd Missile Brigade is based in Gorny (once known as Chita-46) in Zabaykalsky Krai — a region that borders China’s Inner Mongolia Province. 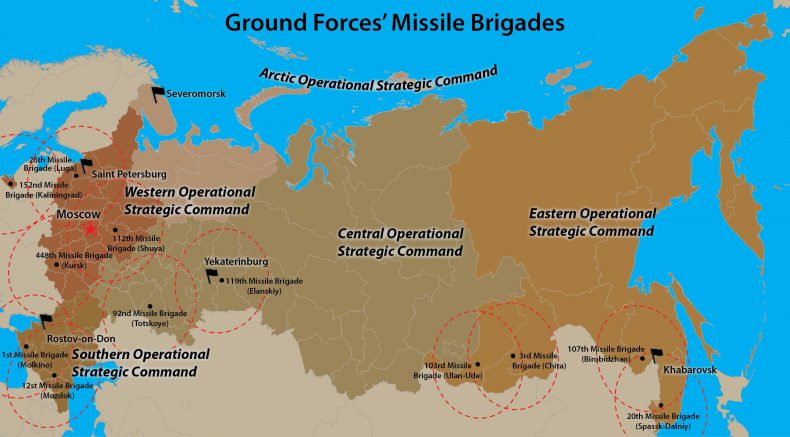 Russian Ground Forces missile brigades that have been/ will be equipped with the 9K720 Iskander-M OTRK. Courtesy of Dr. Roger N. McDermott.

Though the Kremlin has been careful not to voice long-term concerns about China, perhaps the most telling examples of Moscow’s continued uneasiness regarding the growing military might of its neighbour have been large-scale Russian military exercises held in the Eastern MD. As Dr. Roger N. McDermott, senior fellow in Eurasian military studies at the Jamestown Foundation, concludes in his analysis on the large-scale Vostok (“East”) 2014 exercise involving some 100,000 personnel, “Vostok 2014, much like its earlier incarnation in 2010, contains strong evidence that the Russian General Staff continues to consider China a potential threat to Russia.” Given the persisting concern, basing Iskander-M OTRKs in regions bordering China’s Northern Theater Command is a logical move from Russia’s perspective. Indeed, the system’s ability to deliver a wide range of cluster munitions makes it particularly suitable for use against People’s Liberation Army (PLA) armor and infantry in the event of an armed confrontation.

Furthermore, the Iskander-M is also able to deliver various non-cluster warheads with a relatively high degree of accuracy — a capability which Russian officials have repeatedly praised the system for, including during military exercises in the Eastern MD. Reporting to Russian President Vladimir Putin on the launch of Iskander-M quasi-ballistic missiles during Vostok 2014 (which took place from a test range in the Jewish Autonomous Oblast), Defense Minister Sergei Shoigu announced that “Iskander-M units hit two targets at a distance of 200 km (124 miles),” adding that “[t]he combat crews demonstrated outstanding practical skills, including precision in hitting targets.” Similarly, in August 2016, Russia’s Defense Ministry boasted that a missile launched by an Iskander-M unit from the Jewish Autonomous Oblast during a military exercise scored a “direct hit” against a simulated target some 300 km (186 miles) away in the neighboring Amur Oblast. The participation of the Iskander-M and other advanced strike systems in these and other military exercises across Russia appears to reflect Moscow’s understanding that precision-strike capabilities must play a greater role in future military operations against both non-state and state actors, including China, which has been actively bolstering its own precision-strike capabilities.

At the same time, the Iskander-M’s ability to deliver nuclear payloads reinforces Russia’s nuclear “de-escalation” doctrine, which aims to deter an adversary from engaging in hostilities by threatening to retaliate with a limited nuclear strike. Given Russia’s eroding conventional military superiority over the PLA, nuclear weapons, particularly non-strategic systems such as the Iskander-M, are likely to play an increasingly important role in deterring China. Indeed, as Dr. Alexei Arbatov and Major General Vladimir Dvorkin (Ret.) observe in a 2013 Carnegie Endowment for International Peace report, “it may be assumed that Russia’s strategic nuclear forces, as well as some of its non-strategic nuclear weapons, do serve a mission of containing China.”

Commenting on Russia’s 2010 Military Doctrine, which states that “[n]uclear weapons will remain an important factor for preventing the outbreak of nuclear military conflicts and military conflicts involving the use of conventional means of attack (a large-scale war or regional war),” the two experts conclude that “[i]n terms of military logic, to mention a regional war in such a context can only suggest a hypothetical conflict with China.” Russia’s 2014 Military Doctrine reiterates the 2010’s statement on the use of nuclear weapons, indicating Moscow continues to adhere to this line of thought.

All of the above notwithstanding, Iskander-M brigades in Russia’s Eastern MD merit close watch by the United States given the possibility of missiles with longer ranges being fielded with this OTRK that would enable it to hold U.S. assets in the region at risk. Such missiles would also fail to comply with the 1987 Intermediate-Range Nuclear Forces (INF) Treaty, which bans ballistic missiles and GLCMs with ranges of 500-5,500 km (310-3,417 miles). In fact, Russian officials have previously stated that the range of the Iskander-M’s R-500 GLCM could be extended if deemed necessary. Moreover, it is possible that an upgraded GLCM for the Iskander-M is already under development or operational. However, it should be noted that even if such a GLCM does exist, it remains unclear whether its range exceeds 500 km and whether it is affiliated with a new Russian GLCM that allegedly violates the INF Treaty (dubbed SSC-8 by NATO).

Recent developments further support the possibility of Russia extending the Iskander-M’s reach (if it hasn’t done so already). In April 2017, the director general of Russia’s Rostec Corporation, Sergey Chemezov, noted that “a modernized variant of the Iskander-M OTRK will be presented after 2020.” Though Chemezov did not provide additional details, a meeting held between the head of Russia’s Missile and Artillery Troops and representatives of Russia’s military industry a month later shed further light on the potential improvements to the system. According to Russia’s Defense Ministry, the meeting discussed the question of developing new missiles with improved range and accuracy for the Iskander-M. Should Moscow introduce new longer range missiles for the Iskander-M (and/or for a new road-mobile missile system) in its Eastern MD, they will strengthen Russia’s position vis-a-vis China, which fields both ballistic missiles and GLCMs with greater ranges than those currently in use with the Iskander-M. However, the deployment of such missiles will also have serious implications for regional stability.

Guy Plopsky holds an MA in International Affairs and Strategic Studies from Tamkang University, Taiwan. He specializes in air power, Russian military affairs and Asia-Pacific security. You can follow him on Twitter.

How Does China Aim to Use AI in Warfare?

AI in particular is seen as a “game-changing” critical strategic technology.

How Will South Korea and the US Rewrite Their Operational Plan?

The future of the ROK-U.S. alliance is about to be negotiated, and this will likely mean significant changes.

China’s dominance over the commercial maritime sector may be a source of vulnerability for the U.S. and other geopolitical rivals moving forward.