When the British partitioned India and departed the subcontinent 70 years ago, the delineation of the border between the new states of India and Pakistan — the Radcliffe Line — had not yet been released. That would have to wait two more days.

Although the boundary was finalized on August 12, it was published on August 17, 1947, ostensibly to avoid confusion on independence day itself, and in order to buy more time to manage the chaos that was sweeping throughout the provinces of Bengal and Punjab. The Earl Louis Mountbatten, the last British Governor-General of India, also allegedly did not wish for the question of the boundary to take precedence over the independence day celebrations he would preside over in Karachi and Delhi. As a result, when India and Pakistan became independent, some border districts incorrectly believed themselves to be one or the other of those two countries, when in fact, the opposite was the case.

How was the border between India and Pakistan decided? The basic principle underlying the border, and the decision to partition India itself, was the two nation theory, the main proponent of which was the All-India Muslim League, a movement that represented the Muslims of British India. Muhammad Ali Jinnah, the movement’s leader, expounded on the theory in a speech in Lahore in 1940:

… It is a dream that the Hindus and Muslims can ever evolve a common nationality, and this misconception of one Indian nation has troubles and will lead India to destruction if we fail to revise our notions in time. The Hindus and Muslims belong to two different religious philosophies, social customs, litterateurs. They neither intermarry nor interdine together and, indeed, they belong to two different civilizations which are based mainly on conflicting ideas and conceptions. Their aspect on life and of life are different. It is quite clear that Hindus and Mussalmans derive their inspiration from different sources of history. They have different epics, different heroes, and different episodes. Very often the hero of one is a foe of the other and, likewise, their victories and defeats overlap. To yoke together two such nations under a single state, one as a numerical minority and the other as a majority, must lead to growing discontent and final destruction of any fabric that may be so built for the government of such a state.

In other words, the Muslim League wanted the Muslim-majority provinces of British India to form their own country. The main vehicle of Indian independence, the Indian National Congress, a secular group dominated by Hindus resisted partition until March 8, 1947, by which time the British were already planning their departure, and violence was sweeping the country. However, the Congress, led by Jawaharlal Nehru, later India’s first prime minister, envisioned a more centralized state, and in order to achieve that, partition was necessary, in order to consolidate a smaller, and more homogeneous India.

Nonetheless, Congress insisted that two provinces with slight Muslim majorities (around 55 percent), Punjab and Bengal, were themselves partitioned between Hindu/Sikh and Muslim majority areas, in order to hold to as much as India as possible. Having themselves started the ball rolling on the notion of partition on the basis of religious demographics, the Muslim League could hardly go against this principle on the provincial level, although ultimately Pakistan’s inability to retain the entirety of two of India’s most fertile and prosperous provinces was problematic for the new state’s prosperity. However, other provinces such as mostly Muslim Sindh were not to have their Hindu and Muslim majority districts, respectively, hived off (with the exception of Sylhet district of Assam, which became part of East Bengal) . Ultimately, then, the partition of India was actually the partition of the provinces of Punjab and Bengal.

By the time the British rule began in parts of India in the mid-18th century, Islam was followed by around 25 percent of the subcontinent’s population. The vast majority of Indian Muslims were native converts, who became Muslim as India gradually came under the rule of Islamic dynasties from Persia and Central Asia, especially after the 12th century. Islam was particularly dominant in northwest India — today’s Pakistan — parts of which were under almost continuous Muslim rule for a millennia, and in eastern Bengal. Eastern Bengal was lightly populated until the 17th century, when the Mughal government began a program of clearing swamps and forests to foster agriculture: most of the new settlers in this frontier were Sufi-influenced Bengalis. The British province of Bengal, was briefly partitioned into two halves, Hindu in the west, and Muslim in the east, between 1905 and 1911, but this was scrapped due to popular opposition in Bengal at the time. 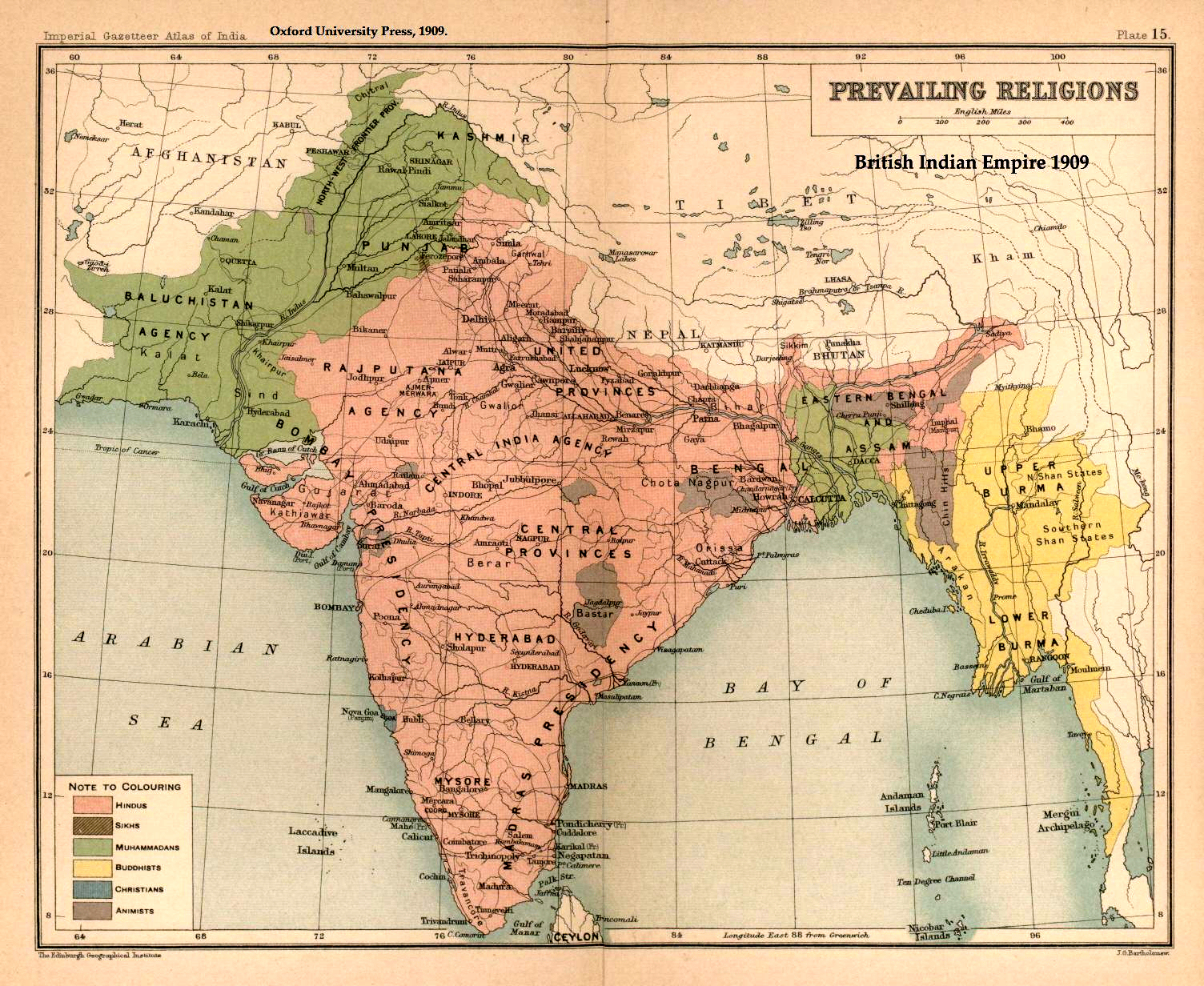 The partition got under way after Mountbatten officially became viceroy on March 24, 1947. After several months of talks with Indian leaders and British officials, the British government approved the June 3 Plan, which, allowed, among other things, for the Provincial Legislative Assemblies of Punjab and Bengal to decide whether they wanted their provinces to be partitioned or not, and if so, start a process by which the Governor General of India would appoint a boundary commission to demarcate borders. The Indian Independence Act, which received royal assent on July 18, set in stone the partition of India, and authorized a commission to demarcate the borders of divided Punjab and Bengal.

The task of demarcating the boundary between India and Pakistan was given to a British lawyer, Sir Cyril Radcliffe, who had in fact never been to India, or anywhere else in Asia, and was not familiar with the demographics of India. At the time, this was seen as a positive, because the assumption was that Radcliffe would be an impartial figure. Nonetheless, Mountbatten may have seen seen fit to influence the commission in favor of India, on behalf of his friend Jawaharlal Nehru, who also shared a close relationship with Mountbatten’s wife Edwina. Controversial and circumstantial evidence suggests that Mountbatten might have shown Nehru the final boundary before it was announced, which led to the line being amended slightly in Punjab in India’s favor along an irrigation canal.

While Radcliffe’s commission was mainly interested in demarcating the border on the basis of religious demography, other considerations, such as strategic roads and irrigation patterns were also sometimes considered, usually in a way that benefited India. For example, the Muslim majority district of Murshidabad in Bengal was given to India in order to keep the water route from Calcutta to the Ganges in India. To make up for this, the Hindu majority district of Khulna was included in what is today Bangladesh. Moreover, in Bengal, a thin corridor of Muslim majority areas was given to India on the border with today’s Bangladesh, in order to connect the northern and southern parts of West Bengal and connect northeastern India with the rest of the country. In Punjab, the Muslim majority district of Gurdaspur was mostly granted to India, something that soon proved advantageous to India because a direct route to the then princely state of Jammu and Kashmir ran through there, making it possible for India to annex it in 1948.

Of course, nobody was completely happy about the the boundary that came to be known as the Radcliffe Line. Pakistan was almost always given the short end of the stick, with several Muslim majority areas on the border being given to India for strategic purposes. India and Hindu-majority regions generally came off better, but the district of Khulna ended up in East Pakistan, and some Hindu-majority areas in Sindh on the border with India were not given the option of joining India. Sikhs, on the other hand, fought long and hard to retain as much of Punjab, their ancestral homeland, in India. The loss of Lahore, the erstwhile capital of the Sikh Empire, which had a Muslim majority, to Pakistan, was a particularly hard blow to the Sikh community, arguments about its historical significance notwithstanding.

Ultimately, there was no easy way to partition India. Any line would have been somewhat arbitrary and caused difficulties for the people living in Bengal and Punjab. The haste of the partition — Radcliffe had little more than a month to draw the boundary — has often been criticized, but the boundary did a fairly good job of demarcating frontiers on the basis of religious demography. Today, there are few ethno-religious conflicts among the population living on both sides of the Radcliffe Line (the Kashmir dispute being of an alternative origin). If anything, a delay could have made things much worse, due to escalating violence. A clear and simple line was what was needed in August 1947. Despite the great violence of the partition, it could have been much worse. By 1948, the mass migration and communal riots were mostly over and both India and Pakistan were getting down to the business of governance for the most part.

The British Raj’s Social and Institutional Impact on Indian Society

The legacy of empire was born of profit-seeking.

Colonial Diamonds Are Forever: India and the Koh-i-Noor Diamond

A group of prominent Indians want the return of the Koh-i-Noor diamond, which remains in the hands of the British monarchy.

The Origins of Hindu-Muslim Conflict in South Asia

What are the historical origins of animosities between South Asia’s two largest religions?

Diamonds Are Forever: India and the UK Revisit the Koh-i-Noor Diamond

India has acknowledged that there may not be a good legal case for the return of the diamond.